A while back I criticized the current fashion for "vertical farms," essentially skyscrapers designed to do what anyone armed with sun and soil can do--grow plants, as a prime instance of our techno-fetishism. This is the application of high technology to the simplest of problems even where its not required, and where simpler solutions are more cost-effective, to make us feel like we're somehow more "advanced" or "clever," or to create "economic activity." Architects, always looking for some new novelty to distinguish themselves from the herd, leaped on board producing fantastic renderings of buildings that would take many millions to construct, all to do what a simple wooden barn or urban greenhouse can accomplish.

It's part of a larger trend in our society--technology for technology's sake--meaning we can not see beyond high-tech solutions even when simpler ones will do. Not only do--they are often superior in terms of performance, cost effectiveness, resource use, bang-for-the-buck, etc. But instead we would rather use technology because it is "cool"--the very definition of a fetish.

So I was glad to see this excellent and very effective takedown of the vertical farming idea:

It's good to know I'm not alone in the common-sense-based community. Routing sunlight through solar panels to power indoor lights is not more environmentally friendly, than, you know, USING THE SUN! You know, the great glowing ball in the sky that does it all for free. However, most consumers of American news are probably unaware of the sun since they spend all their time indoors staring at screens or driving around in cars.


No one would consider stacking photovoltaic solar panels one above the other. In such a system, only the top panel would produce electric current. The leaves of plants also need to be directly and strongly illuminated if they are to activate the photosynthesis that powers their growth.

If plants are living indoors, even if they are in an entirely glass-walled room, they can't capture enough sunlight to perform those functions. Plants nearest the windows will receive weak sideways illumination for part of the day, while interior plants will get much less than that; for both, the light intensity would be wholly inadequate to produce a significant quantity of food.

Growing plants indoors. Sheesh. Maybe if you're trying to avoid being arrested for growing that plant, but otherwise it's like developing high technology to raise fish on land. People already complain that salad greens and broccoli are too expensive; imagine what happens when you've got to recoup real-estate costs, property taxes, rental fees, and so on. There's a reason businesses move to the the suburbs. Do you really want lettuce at $20.00 a head?

And the idea that we don't have land is absurd on its face. Every city is surrounded by an abandoned farm belt. You could just bike that produce in if you had to, or, heck, carry it by horse-drawn wagon.


In the United States, we produce 4,000 calories worth of food per resident daily, twice what's required. We have ample land; we just need to stop abusing the soil we have.

Consider what it would take to provide fresh produce to just 15,000 city dwellers; that would be about 2 percent of the population of the District of Columbia.

That was the objective of a favorable 2013 analysis of vertical gardening by GIZ, a German engineering group. They estimated that the project would require a 150 x 150 square-foot building with 37 stories. It would cost a quarter billion dollars to construct and equip and would consume $7 million worth of electricity annually. Those estimates led them to conclude, “It is possible to grow only high value crops for consumers who have disposable income for such products.” 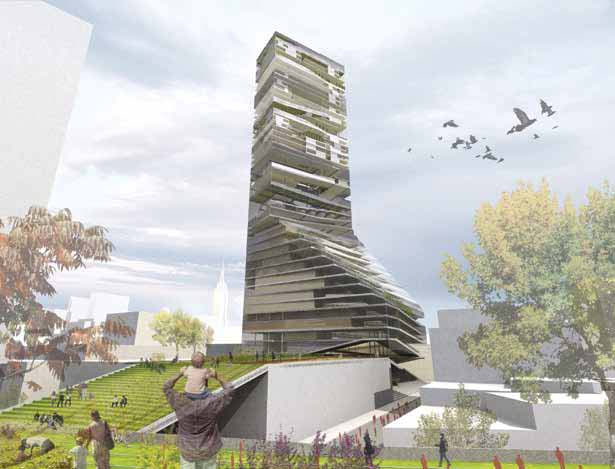 The article is brilliant, backed with facts and figures that I didn't have available. I wish stuff like this would squelch the techno-fetishism promoted by the media, but since their job is to peddle novel non-solutions to maintain the status-quo, I kind of doubt it.

Defenders of vertical gardening claim that it can produce much more food per acre of land per year than sun-and-soil agriculture. But not only are many of these comparisons exaggerated; they are also irrelevant. No matter how big the improvement in production per square foot per year, it will have no effect on the key number in vertical gardening's energy predicament: the quantity of photosynthetically active light required to produce each and every kilogram of plant tissue. That's a basic biochemical requirement.

Increasing a food-production building's yield by stacking in more and more plants per floor or operating year-round only increases the demand for electric lighting.

What's the alternative? As the article points out, rooftop gardening is one. The roofs are already there anyway and exposed to direct sunlight; plus sunlight actually degrades roofing membranes. Thus, protecting the membranes from UV degradation and growing plants, whether for edible or medicinal purposes or just to clean the air, makes sense. Vertical walls can now be used as well (though difficult to harvest).

And of course, there are ideas like urban food forests, raised bed gardening on empty lots, or just tearing up your lawn and planting a victory garden. A few years ago on this blog I wrote about French Market Gardening:

Here's another example from Low-Tech Magazine: Fruit Walls: Urban Farming in the 1600s

And another great example of using greenhouse technology on an appropriate scale to grow citrus fruits on the Great Plains in the middle of winter!


It is these kinds of solutions that actually make sense, rather than the grandiloquent top-down megatechnic solutions promoted by the corporate media.

It also makes me wonder what the real agenda is in trying to automate every tiny scrap of agricultural labor in a world where millions of people are unemployed and desperate all over the planet. Control the food and you control the people. If people can produce their own, they have freedom, which is what the people in power definitely do NOT want.

Here's Lloyd Alter's coverage: Vertical farms: Wrong on so many levels (Treehugger). Lloyd takes on some other green fantasies, too, for example, the solar-panel highways concept. Again, just like growing plants indoors, burying solar panels under streets seems like a silly idea on its face, yet it was again greeted with raptures of "change the world" excitement. One would think it would make more sense to put solar panels (made with difficult to extract elements and often toxic to produce) where, you know, the sun might shine on them.

Now of course this roadway was a prototype and would cost a lot less if mass produced. But solar plants in Germany are now delivering power at 9 cents per kWh. It's predicted that by 2025 it will drop to between 4 and 6 cents per kWh. The Solaroad people claim that their system will pay for itself in 15 years, but at those rates it will cost more to rake the leaves off their solar panels than it will get out of them in electricity.

Adele Peters of Fast Company goes so far as to claim that "A solar-paved street could ultimately be cheaper than something made of asphalt or concrete."I am sorry, but that defies logic. The solar roadway has to sit on top of a very stable and strong concrete base, and the return on this investment is not fifteen years, it is never...OK, they have proven that they can do it. They still have not proven that it makes any sense.

As he pointed out when it was built:


Get those darn kids off the solar bike lane! They're blocking the sun! They're standing on US$ 3.7 million of photovoltaics and precast concrete bike lane, running all of 230 feet, that's going to generate enough energy to supply enough electricity for three houses!

The Solaroad people, who built this bike lane in Krommenie, near Amsterdam, admit that because of the angle (lying almost flat), these solar panels will only generate 30% of what a conventional roof mounted panel would produces. They are also protected by heavy textured tempered glass, that probably costs a whole lot more than solar panels do these days.


...there are a lot of downsides to building with cargo containers. For instance, the coatings used to make the containers durable for ocean transport also happen to contain a number of harmful chemicals, such as chromate, phosphorous, and lead-based paints. Moreover, wood floors that line the majority of shipping container buildings are infused with hazardous chemical pesticides like arsenic and chromium to keep pests away.

Reusing containers seems to be a low energy alternative, however, few people factor in the amount of energy required to make the box habitable. The entire structure needs to be sandblasted bare, floors need to be replaced, and openings need to be cut with a torch or fireman’s saw. The average container eventually produces nearly a thousand pounds of hazardous waste before it can be used as a structure. All of this, coupled with the fossil fuels required to move the container into place with heavy machinery, contribute significantly to its ecological footprint.

Another downside is that dimensionally, an individual container creates awkward living/working spaces. Taking into account added insulation, you have a long narrow box with less than eight foot ceiling. To make an adequate sized space, multiple boxes need to be combined, which again, requires energy.

In many areas, it is cheaper and less energy to build a similarly scaled structure using wood framing. Shipping container homes makes sense where resources are scarce, containers are in abundance, and where people are in need of immediate shelter such as, developing nations and disaster relief. While there are certainly striking and innovative examples of architecture using cargo containers, it is typically not the best method of design and construction.

The Pros and Cons of Cargo Container Architecture (Arch Daily)


Housing is usually not a technology problem. All parts of the world have vernacular housing, and it usually works quite well for the local climate. There are certainly places with material shortages, or situations where factory built housing might be appropriate- especially when an area is recovering from a disaster. In this case prefab buildings would make sense- but doing them in containers does not.

You’ve seen the proposals with cantilevers everywhere. Containers stacked like Lego building blocks, or with one layer perpendicular to the next. Architects love stuff like this, just like they throw around usually misleading/meaningless phrases like “kit of parts.” Guess what- the second you don’t stack the containers on their corners, the structure that is built into the containers needs to be duplicated with heavy steel reinforcing. The rails at the top and the roof of the container are not structural at all (the roof of a container is light gauge steel, and will dent easily if you step on it). If you cut openings in the container walls, the entire structure starts to deflect and needs to be reinforced because the corrugated sides act like the flange of beam and once big pieces are removed, the beam stops working. All of this steel reinforcing is very expensive, and it’s the only way you can build a “double-wide.”

What's wrong with shipping container housing? One architect says "everything." (Treehugger) For another take with economics in mind, see: Home, Sweet Shipping Container, and Why Not? (Naked Capitalism)

I'm glad at least a few of these ridiculous sacred cows that are endlessly being recycled in the media are finally being taken on. The emperor has no clothes, and architects are often the worst offenders. There are architects, however, who really do work to create affordable, appropriate-tech solutions, and it's too bad they don't get the coverage they deserve. Maybe we'll finally get to discuss real solutions that don't pad the profits of the one percent. Feel free to include your own favorite examples of techno-fetishism in the comments.
Posted by escapefromwisconsin at 12:59 PM