TheDepopulation Bomb Goes Off At Home 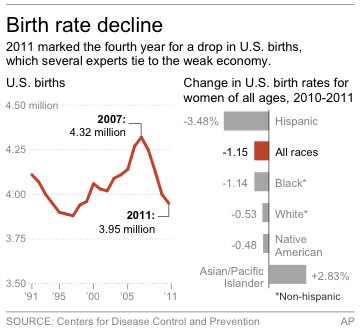 The depopulation bomb has finally come home: U.S. birthrate plummets to its lowest level since 1920

This is mainly because the vast wave of Hispanic immigration has slowed and the immigrant birth rate is decreasing, falling more in line with the world average. Non-Hispanic births have actually been falling for some time. I wonder if there is something deep in human genetics that causes a pioneering population that moves into foreign territory to reproduce more. It would be consistent with primate behavior. Immigrants always tend to have more children than the native population for some reason. Eventually it levels off. In the nineteenth century, people were fretting about drowning in Irish and Italians. My own immigrant great-grandparents on my mother’s side had 10 kids (and they were German Protestants.)

It’s no surprise why this is happening: The lack of family supporting jobs and sheer awfulness of those that are, crushing debt burdens of college graduates, the lack of class mobility, the poor quality of public schools, higher prices for most things relative to other countries, and a general pessimism about the future. Men would rather stay home and play video games then raise a new generation that can have no realistic ambition higher than stock clerk, and I can’t blame them.

Also, raising kids in America is just bloody awful. I've known so many parents who leave the city and move to a distant isolating exurb once they have a baby just so they can be in "a good school district." This inevitably means buying a very expensive oversized house and the attendant burdensome mortgage. There, separated from everyone else, they not only have lengthy, stressful commutes to their job, but they have to be full-time chauffeurs to their children, who are marooned and helpless. Then their kids are aggressively marketed to since the moment they're born, turning even nice kids into greedy, demanding monsters ready to fly into tantrums at the word "no." Add to that the stratospheric cost of college, which hardly any parent can expect to save enough for anymore on top of all of the above and their own retirement, and the fact that non-college jobs basically consist of checkout clerk and fry cook. Honestly, I don't know how, or why people do it anymore. My coworkers pay thousands in medical bills for every child they have. Theoretically they make about the same as I do, but even with two incomes I don't know how they do it.

America puts more of the burden of child-rearing on the individual that most other industrialized nations as part of our "you're on your own" philosophy with predictable results. This is merely a consequence of the one percenter's utter rout of everyone else in the class war. Now even right-wingers are making noises about government help with child care, so you know they're scared.

This makes me wonder about something. Supposedly it’s the Ayn Randian supermen who make the economy function, with the rest of us parasitically mooching off their greatness. So shouldn’t the right be happy that there are less moochers to suck off their teat? Shouldn't they be happy that there are less water- drinkers instead of carriers, or whatever? Why is it that it's the right that always goes apoplectic at the idea of less breeding going on? After all, the John Galts of the world have more than enough money to have whatever kids they want. I’m confused. Or maybe they really know that they owe their fortunes to being at the top of a Ponzi scheme that requires new members, and population growth is needed to keep wages down.

There is a great hue and cry from the usual suspects. Marginal Revolution calls it the real fiscal cliff. (apparently we must grow forever or else). The biggest doozy however comes from the New York Times columnist Russ Douthat:


The retreat from child rearing is, at some level, a symptom of late-modern exhaustion — a decadence that first arose in the West but now haunts rich societies around the globe. It’s a spirit that privileges the present over the future, chooses stagnation over innovation, prefers what already exists over what might be. It embraces the comforts and pleasures of modernity, while shrugging off the basic sacrifices that built our civilization in the first place.

The reason I love this quote so much is that it's almost verbatim the kind of stuff Roman authors were writing at the end of the empire. I'm not enough of a Roman scholar to pick one out, but they sound almost exactly the same in tone and substance. Where would the empire get the soldiers to maintain the frontiers, the scolds wondered. Of course we know where they got them - mercenaries from beyond the border. The immigration solution circa the second century. For a good and funny take on the above quote, see this.

I won't belabor the reason why this is a good thing and the critics are all wet; I already did that in The Depopulation Bomb. Here is an old article from Energy Bulletin that makes a similar point:


Common sense says that continuously increasing population makes it harder to keep everyone employed, not easier. The problem is not too few jobs; it’s too many people. There are already too many people consuming too much and diminishing the earth’s long-run carrying capacity. Economic growth is running into the wall of limited resources on a finite planet. The trends created by economic growth and population growth include higher carbon emissions and climate change, loss of forests, depleted fisheries, soil erosion, species extinctions, toxic contamination, and the possible negative effects of technologies like fracking and genetically modified foods. The path the world is on — economic and population growth — is just as unsustainable as the subprime mortgage market and trillion-dollar federal deficits and will lead to collapse.

Here's my favorite take, though. It points out that not only will we not have enough jobs for people, we won't have enough people for those nonexistent jobs (!):


Yes, things are really dire. Readers of the NYT, Washington Post and other major news outlets have been treated to large numbers of stories in recent months telling us that technology is going to make large segments of our workforce obsolete. According to these stories millions, or even tens of millions, of people will be unable to find jobs in the economy of the future.

But wait, it's getting even worse. Not only are we not going to have enough jobs, the Post now tells us that we will not have enough people. It reports on a new study showing that the United States had the lowest birth rate since 1920 last year. The article tells us:

"The decline could have far-reaching implications for U.S. economic and social policy. A continuing decline would challenge long-held assumptions that births to immigrants will help maintain the U.S. population and provide the taxpaying work force needed to support the aging baby boomer generation."

So there you have it, not only will we not have enough jobs, the Post is telling us that we won't have enough people. It can't get much worse than that!

Horrors: We're Going to Have Both Too Few and Too Many Workers! (Beat the Press)

And this is a good place to include this fascinating pages I found by accident while researching a totally different topic:

Here are some fascinating tidbits from the above:

Looking at the above chart, there seems to be an interesting pattern. There are two huge bubbles in immigration - the one after the Civil War to the First World War and the Great Depression, primarily from Central Europe and Ireland, and the one from 1992 to 2008 primarily from Northern Mexico, Central America and the Caribbean. Both ramped up exponentially right before an economic collapse. It seems to me that history is repeating. Immigration is loosened to bring in vast hordes of desperately poor workers to suppress wages. It works - wages plummet, and the economy craters, with now no longer enough jobs to go around. It's a trend-the plutocrat class brings in the poor workers to break the back of working-class wages, then plays the immigrants against each other to get their preferred candidates elected. Note that during the time of America's greatest prosperity and growth, immigration was practically nil. Something to keep in mind the next time you hear how we need mass immigration to "solve" our economic problems. Whose economic "problem" are they solving?
Posted by escapefromwisconsin at 9:39 PM