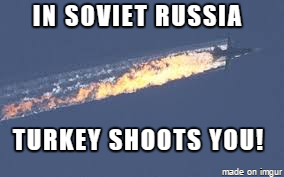 A few million years ago dinosaurs dominated the earth, now they're a food source for mammals. So it goes with evolution. It's sad that Thanksgiving, a regional harvest festival, has turned into a celebration of monocrops (turkeys, potatoes, pumpkin, etc.). Apparently the decline of megafauna is related to the domestication of squash:


Without elephant-sized animals to distribute seeds, wild plants will grow only where the fruit drops -- as far as the pumpkin rolls. At the same time, the disappearance  of megafauna altered the landscape from one of a patchwork of environments to something more uniform. Cucurbita are weedy plants that liked the disturbed landscape created by the megafauna, but fared less well in the new landscape of the Holocene...

"It's been suggested before and I think it's a very reasonable hypothesis, that wild species of pumpkin and squash weren't used for food early in the domestication process," ...Rather, they might have been useful for a variety of other purposes like the bottle gourd, as containers, tools, fishnet floats, etc. At some point, as a symbiotic relationship developed, palatability evolved, but the details of that process aren't known at the present."...If humans initially used cucurbita for nonfood applications, they somehow eventually managed to find those plants that mutated and lost their toxicity...cucurbita may have been domesticated at least six different times in six different places. "There is a huge amount of diversity in some of the domestic species and between them as well..."

Native American boatbuilding was fairly advanced. Polynesians crossed the Pacific Ocean in boats like these:


Using their ancestors’ traditional burn-and-scrape methods, [boatbuilders from the Mashpee Wampanoag nation] have built a small fleet of...boats, known as mishoon, hosted mostly at the Plymouth Plantation museum in Massachusetts...In the 17th century, when these shores were thick with towering old-growth trees, Natives made even larger mishoon, which the colonist Roger Williams reported easily held “twenty, thirty, forty men.” Another newcomer claimed he witnessed a sea canoe with 80 people aboard plowing through the waters of Long Island Sound. Indians also built light bark canoes for protected passages, but most coastal Algonquians preferred dugouts when heading into offshore waters...Though Native vessels were simple when compared to European ones, that fact only made foreigners all the more impressed with Algonquians’ nautical prowess. ..When colonists looked for “skilful hands to guide them in rough weather, none but the Indians scarce dare to undertake it.”

Native-style craft were so obviously useful that colonists eventually started building their own dugouts of identical size and form as Indian ones. Indian boatbuilding practices were cheaper and easier to master than European methods—and the shortage of qualified shipwrights in the region meant that plank-built vessels were pricier than most houses. Colonists therefore relied on simpler canoes for transporting goods, people, and livestock. The Dutch even boasted that they possessed a massive “wooden canoe obtained from the Indians, which will easily carry two hundred schepels of wheat”—a capacity of 9,000 pounds.

Masters of the Atlantic (Slate)

And a perennial chestnut from Slate: Why don't we eat turkey eggs? Short answer: monoculture enforced by economics.

Related to that, here's a good Reddit disuccion on that topic:

Are new megalithic sites such as Göbekli Tepe and Gunung Padang changing mainstream Archeologist and Anthropologist views on the timelines of human beings?

We mostly know about civilizations that built in stone - i.e. nonperishable materials. That gives us a skewed view - societies that built monumental works with stone were probably more unequal nad top-down than societies which relied on wood, skins, wattle-and-daub, and earth. If you used gourds for containers, for example, like the article above describes, the record would be different than cultures that used fired clay pottery, which lasts practically forever. The evidence to some extent dicates the story.

Also, hurt feelings may have encouraged the human diaspora (University of York). Why fight when you can move away? Eventually, there was nowhere left to move, and too many investments in your local community after generations of sedentism to want to move (circumscription). The first progress trap?

And a couple brief follow-ups on monetary history: This post seems to convey the idea that lending was mostly peer-to-peer in the North Atlantic area in the Early Modern peiod. Somehow (the author doesn't know how), lending became controlled by the banks instead of peer-to-peer. So a lot of the Internet direct-lending schemes are once again a "back to the future" type scenario:


Since at least 1400 rural lending and borrowing was at least in some regions common and tied to the life cycle of households and families, which needed to borrow considerable amounts of money during some phases of their life cycle and lent money during other phases...After 1500 at the latest such credit markets can be found all over Europe: around Zürich, in the Black Forest, in the Vosges, in Flanders, Westphalia, the East of the Netherlands and many parts of England and France...we discover extensive and lively credit markets everywhere. Most lending and borrowing was local. Some of it (especially when people borrowed from family?) was however supra-local (i.e. lender and borrower lived further away from each other than can be travelled in one day)...A lot of lending and borrowing was based in the countryside. Towns sometimes played a decisive role but this was often the case when circumstances were special, i.e. in the case of new polders in the Netherlands (for instance around 1600) or the abolishment of seigniorial dues in Germany (first half of the nineteenth century)...Banks were next to non existent in these areas, at least until the beginnnig of the nineteenth century. But there often were middlemen, often quite literate officials. Using the information available to them often made this position quite profitable...Which, in a long run perspective, of course leaves us with the question why people stopped lending to each other and started to leave lending to the banks.

And the real first widespread implementation of paper money seems to have been under the Mongols: Amazing History of Paper Money, the Gengis (sic) Khan Epoch (Let's Talk Payments)

To get your ancient Near Eastern history fix on, check out the latest Dan Carlin episode.

Posted by escapefromwisconsin at 3:23 PM