“Growth purely for its own sake is the philosophy of cancer.”
Jasper Fforde

If there’s ever any doubt that economists desire growth for its own sake, rather than for any tangible benefits delivered to the general population in a “growing” economy, check out this post.

In a world that is being utterly gutted by human numbers, this is utterly insane. Unlike climate change, ocean acifdification, or the sixth extinction, shrinking population growth rates are a crisis:


MENTION “demographic crisis”, and most people think of countries where women each have six children and struggle to feed them. Much of Asia has the opposite problem: low fertility and an upside-down family structure (four grandparents, two parents, one child). Three-quarters of all the people in countries with exceptionally low fertility live in East and South-East Asia. Prosperous Japan, South Korea and Taiwan have fertility rates of 1.4 or below. The fertility rate is the number of children a woman can expect to have during her lifetime. A rate of 2.1 implies stability: the population is replacing itself. Demographers refer to rates of 1.4 or less as “ultra low”.

The difference between 2.1 and 1.4 may not sound like much. But consider what it has meant for Japan. In the early 1970s the country had a fertility rate of 2.1, with 2m children born every year. Four decades later the number of births has halved, with the fertility rate down to 1.4. Or take an even more dramatic example, China. In 1995 some 245m Chinese were in their 20s. By 2025, on current trends, there will be only 159m, a decline within a single generation of 86m. This will reduce by more than a third the segment of the population that is best educated, most technologically astute and most open to new ideas.

Clearly East Asia needs to start reproducing so that they can have more growth. More people means a growing economy, and that’s just better, right? Look how well Africa’s doing. After all, East Asia is dangerously underpopulated: 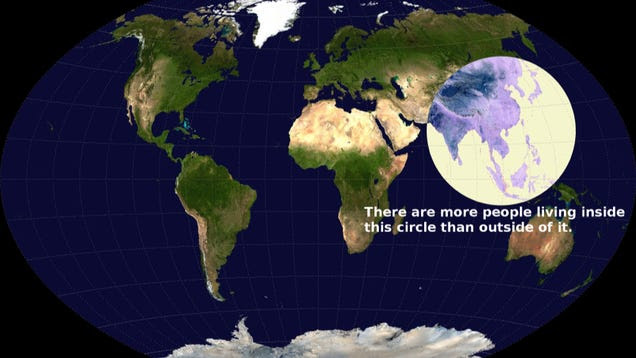 So what’s the benefit of growth again?

There’s also an odd paradox. Environmentalists always tout industrialization as the solution the world’s environmental crisis because it slows down fertility rates. But when it works as intended, for example In the East Asia example above, the forces of economics cry that we must start producing more people or else! In other words, both the Ecomodernists and the Neoliberals want to go full steam ahead on economic growth and technoutopianism, but the Ecomodernists are dependent on the same thing happening (population stabilization) that the neoliberals believe is a total disaster. One’s head explodes.

The real reason for wanting population growth is the same reason as open borders is encouraged--it keeps the labor supply high and hence wages low. History has shown conclusively that increasing labor supply leads to lower wages, while decreasing supply of labor leads to higher wages. When industrialism happened, real wages fell, as there were more workers than there were jobs, a good position for the owners of the factories. They started to rise after 1850, exactly when massive outmigration (U.S., Australia, Canada, Mexico, Australia, New Zealand, Argentina, etc.) began to occur. Wage growth in the U.S. from 1940-1977 were driven by high unionization and low immigration. No more.

As people pointed out in the comments, the per capita growth factoring in the lower population has actually been higher for the Japanese than for Americans. In other words, our growth has been eaten up by population growth such that we are actually worse off than the average Japanese person (even before factoring in the extreme inequality of the U.S. where the benefits of growth accrue only to the top 0.1). And even the horrible government debt caused by this is hardly a problem – Japanese debt is mostly domestic held by retirees (meaning their children will be the beneficiaries) and interest rates are low. Meaning that in extremis the Japanese can always write off the debt they owe themselves to pay off the Gaijin. From the comments:


“According to the world bank over the last 5 years Japanese per capita real GDP growth has averaged 1.66%. When you population is actually falling, standard economic data analysis can be very misleading.”

“We sure get a lot of Japan-pessimism in the US media, but they have significantly better quality of life than Americans or Europeans by any metrics that matter: job security, health, life-expectancy, crime rates, unemployment, obesity, etc. Japan was more orderly and stable post-Tohoku than the USA is on any given day. “

“Japan hasn’t made much money for Wall Street over the last quarter century so we constantly hear about how horrible Japan is.”

“...The U.S. relies on population growth for GDP growth to a startling extent. I believe Japan’s per capita GDP growth outstripped or at least matched the U.S.’s during the 1990’s as well, but I can’t find anything on that after a quick google.”

And here's a fitting quote from Albert Bartlett:


"We in the United States are in a culture that worships growth. Steady growth of populations of our towns and cities is the goal toward which the powerful promotional groups in our communities continuously aspire. If a town's population is growing, the town is said to be "healthy," or "vibrant," and if the population is not growing the town is said to be "stagnant." Something that is not growing should properly be called "stable." Yet, the promoters of growth universally use the word "stagnant" to describe the condition of stability, because "stagnant" suggests something unpleasant. Since continued growth is the goal of the promoters in our communities, we should understand the arithmetic of steady growth."

Posted by escapefromwisconsin at 8:25 AM