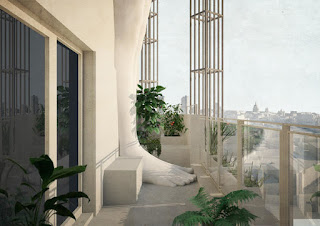 Check out this architecture specifically designed for our post-apocalyptic future. Talk about ruin value!


Nuclear war. Disappearing natural resources. Overpopulation, then underpopulation. Rising sea levels. These are just some of the challenges Londoners will have to face over the next 10,000 years. Royal College of Art graduate Alice Theodorou has designed a skyscraper concept she thinks can weather those ten millennia. How? By leveraging classical sculpture and the beauty of the human form to instill an innate desire in future Londoners to preserve it.

In Theodorou's concept, which she calls "The Future Will Just Have To Wait," London's Mount Pleasant Mail Centre would be the site for a skyscraper, the supports of which are made of massive marble caryatids, Atlases, and other Greco-Roman inspired sculptures. Even if it lasts 10,000 years, or even just 100, the building isn't meant to be a completely static structure: Theodorou expects that it will be renovated, repurposed, and rebuilt.

Think of it like a modern day Parthenon, which has been an Athenian temple, a mosque, a Christian church, a museum, and a marketplace in its 2,500 year history. Theodorous wants to do the same thing here. As part of her concept, she imagines how the Mount Pleasant site could be used as a nuclear shelter in 2049 when global thermonuclear war results from the depletion of the world's lead resources, or how the collapse of the European Union in 2040 might require the Mount Pleasant building to cope with laws requiring all households in Britain to grow their own food. She even imagines what the Mount Pleasant site might look like as an underwater lighthouse powered by gallium indium phosphide cells in the year 12,000, when all of London is at the bottom of the ocean.

But why does Theodorou think her building will last so long? When researching her project, Theodorou discovered that one of the oldest pieces of art on Earth is a 40,000 year old figurine of a woman, carved out of ivory. Asking herself how such an object could survive to be passed down to us, Theodorou's central premise is that humanity is hard programmed to try to preserve anthropomorphic art and design. The Mount Pleasant building of her concept will survive for the same reasons the Venus de Milo, Winged Victory, and the Laocoön have: humanity cherishes itself, favoring "the endurance of the human form over the fleeting nature of architectural style." 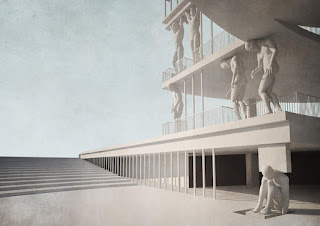 A Skyscraper Designed To Survive The Next 10,000 Years (Fast Company) It reminds me of the efforts of the Human Interference Task Force to design a resting place for nuclear waste that has to warn people away for the next 10,000 years: 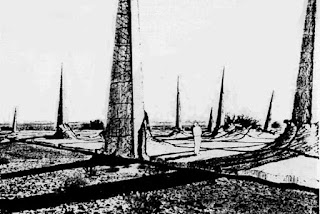 This place is not a place of honor.
No highly esteemed deed is commemorated here.
Nothing valued is here.
This place is a message and part of a system of messages.
Pay attention to it!
Sending this message was important to us.
We considered ourselves to be a powerful culture.
An Architecture of Peril (Michael Brill)

It also reminds me of the visionary classical architecture of Étienne-Louis Boullée: 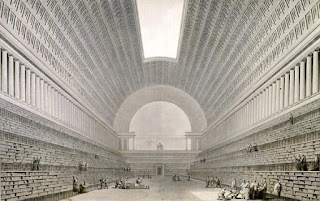 This student developed what he calls "architecture for atheists": 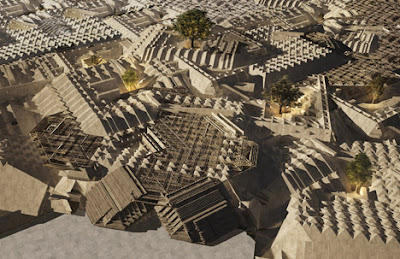 Building on the philosophies of Alain de Botton, who in 2012 advocated Atheist temples for London, Chmielewski proposes a series of structures intended to inspire awe without any references to religion. He calls the project Atheistic Architecture.The designer claims that by 2040, less than one per cent of Britain's population will be a member of the Anglican Church. But there are still 55 churches in the City of London, which he believes have become wasted spaces – so he wants to replace them.

"In Religion for Atheists, Alain de Botton writes about the need for a new typology for atheistic temples," the designer told Dezeen. "He perfectly describes a sense of nostalgia that I feel for religious architecture.This project is a response accommodating both the discourse between nostalgia for ecclesiastical beauty and the rejection of fallen religious doctrine."

Chmielewski's proposal centres around St Mary-Le-Bow, the historic church on Cheapside designed by Christopher Wren to replace a predecessor destroyed in the Great Fire of 1666.He proposes converting the building into what he describes as "an ever-evolving open cathedral" celebrating the life cycle of the oak tree. The aim is to create a building that incites awe through an awareness of the scale of nature and the universe.

"In today's world, society deprives atheists of places where they can submerse themselves in a moment of solitude, feel a part of something greater, or perhaps connect with nature and the universe," explained Chmielewski.The structure would feature a facade made up of 39,999 sheets of marble with gold trims – referencing the many generations of humanity – as well as a roof terrace for quiet contemplation, and a celebration hall for events.It would also house the headquarters and library for the British Humanist Association, a non-profit organisation that works on behalf of non-religious people. 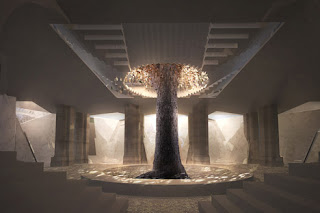 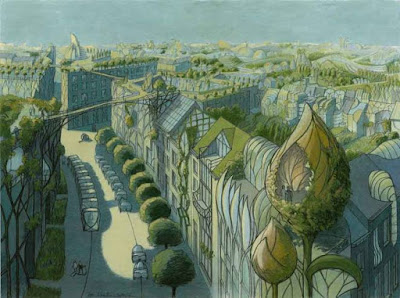 In the TEDxNantes video below (subtitles available), Schuiten explains how he believes that the tree's inherent structure is already sound, saying, "So why redesign the tree? Why redesign what was already there first?" and proposes that humans develop ways to plant trees, guide their growth, prune and graft them into dwellings that would populate these vegetal metropolises. Schuiten calls his approach to building "archiborescence": a portmanteau of "architecture" and "tree," using principles similar to biomimicry where one designs with nature as inspiration.

In this scheme of the "City of Habitarbres" (habitable trees), Schuiten explains how we might live amongst the trees, using biotextiles and bioluminescence:

The city of habitarbres develops in a remodeled forest environment tailored to the needs of a new lifestyle. The people are no longer consumers, but the actors of a new ecosystem that enables the management and the development of every term and ensures a long-term evolution of the city. The outer walls forming the habitarbres facings are made of a skin-based translucent or transparent proteins inspired chitin dragonfly wings. These flexible and resistant biotextiles are different in nature depending on their location. The floor slabs and internal walls are made of known techniques earth stabilized with lime, and armies of plant structures. These soils are the thermal mass required to store calories and redistribution of heat. Natural ventilation of buildings is modeled on termite mounds. Night lighting of homes is produced by bioluminescence in mimicking the process used by fireflies or certain abyssal fish. 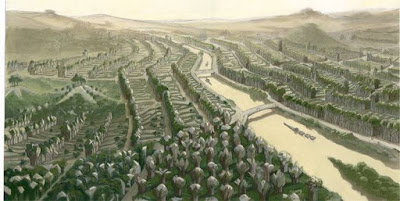 It reminds me of the work of the late Malcolm Wells: 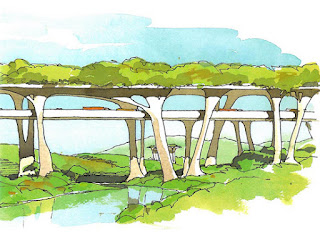 Probably a fantasy on the scale of cities, but check out The Root Bridges of Cherrapunji (Atlas Obscura): 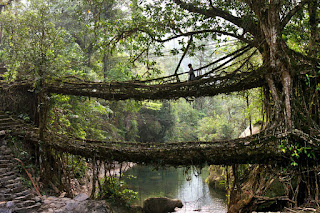 The Ficus elastica produces a series of secondary roots from higher up its trunk and can comfortably perch atop huge boulders along the riverbanks, or even in the middle of the rivers themselves. The War-Khasis, a tribe in Meghalaya, long ago noticed this tree and saw in its powerful roots an opportunity to easily cross the area's many rivers. Now, whenever and wherever the need arises, they simply grow their bridges.

In order to make a rubber tree's roots grow in the right direction — say, over a river — the Khasis use betel nut trunks, sliced down the middle and hollowed out, to create root-guidance systems. The thin, tender roots of the rubber tree, prevented from fanning out by the betel nut trunks, grow straight out. When they reach the other side of the river, they're allowed to take root in the soil. Given enough time, a sturdy, living bridge is produced.

The root bridges, some of which are over a hundred feet long, take ten to fifteen years to become fully functional, but they're extraordinarily strong — strong enough that some of them can support the weight of 50 or more people at a time. In fact, because they are alive and still growing, the bridges actually gain strength over time — and some of the ancient root bridges used daily by the people of the villages around Cherrapunji may be well over 500 years old.

And there is a man in England who is doing "biological manufacturing," growing furniture using trees: Let’s Grow Some Furniture: Botanical Manufacturing (No Tech Magazine) and The man who grows trees into chairs (BBC) See also Wisconsin’s Whole Trees Design. 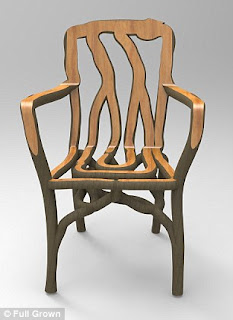 Also check out the work of Patrick Dougherty:


Patrick Dougherty has made over 200 sculptures in the 25 years that he has been creating Stickwork. But his construction work began when he was 28, working for the Air Force in the health and hospital administration. He decided to buy property in North Carolina and build his own house from the materials on the site. Collecting fallen branches, rocks and old timber, Dougherty was able to construct his home, in which he still lives with his wife and son, with a few additions. By 36, Dougherty decided to return to school for sculpture and attended the art program at the University of North Carolina. His interest in what nature had to offer led him to develop his tangled sculptures. Each sculpture is different and depends greatly on the site. Each project is different and depends on the volunteers that participate and the public that never fails to stop and watch the sculptures being woven together. 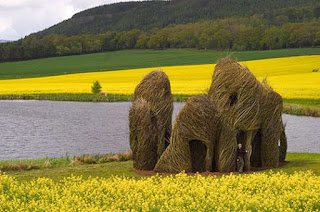 It reminds me of that concept that any sufficiently advanced civilization is indistinguishable from nature.
Posted by escapefromwisconsin at 8:16 AM