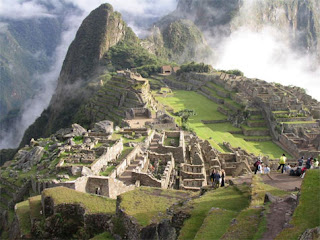 According to Conquests and Cultures: "The highway system connecting the vast Incan empire was tens of thousand of miles long and has been considered one of the best all-weather highways built before the appearance of the automobile." The BBC has a good story on just why that was:


The Inca Road is one of the most extraordinary feats of engineering in the world. By the 16th Century it had helped transform a tiny kingdom into the largest empire in the Western hemisphere.And to the envy of modern engineers, substantial parts of the 24,000-mile (39,000-km) network survive today, linking hundreds of communities throughout Argentina, Bolivia, Chile, Colombia, Ecuador and Peru. Incredibly, it was constructed entirely by hand, without iron or wheeled transportation.

"When you look at Machu Picchu in Peru - that wonderful structure on top of the mountain that millions of tourists visit every year - what most people don't see and unfortunately don't know, is that the real marvel is underneath it all," says Jose Barreiro, co-curator of The Great Inka Road (the Smithsonian uses the Quechua spelling of Inca).

The dry stone monument sits on top of a complex irrigation system of culverts and channels that control the flow of water into fountains that still work today. And while archaeologists have known that for some time, the exhibition reveals the extent of the Inca understanding of water and how they applied the same technology to road building.

"Every year, water destroys many modern roads. But the Inca roads tend to stay," says Barreiro. "The constructions were built with seismic events in mind and that's what engineers today are excited to study - how we can benefit from that knowledge."

Sustainability was the key to success. The Incas paid attention to local conditions, using local materials and working with the landscape. On steep terrain they built steps to dissipate the water's energy and counter erosion. At high altitudes they paved the way with local stone to protect the surface from ice and snowmelt, and when they needed supporting walls they left holes for the water to drain.

The empire's spiritual centre and capital was Cusco in southeastern Peru. All roads emanated from the city. Along the routes, sacred places were marked by wakas - stone outcroppings, buildings or even the confluence of rivers that served as altars to the Pachamama (Mother Earth) or Inti (the sun god)....Inca society was certainly "strict" but at its heart was a philosophy of reciprocity. The Incas gave back to nature and everybody knew their role in the community.

"The entire environment was alive. Everything from the stones to the animals to the cosmos needed some kind of interaction with a human being in prayer, connectivity or appreciation. Everything was organised and regulated by the state. You had the masters of the road, the masters of the bridges, thekhipu - a knotted device that kept track of people on the road, products, organised censuses of people and news from everywhere in the empire."

Inca Road: The ancient highway that created an empire (BBC)

Technology Old and New
Posted by escapefromwisconsin at 8:45 PM