Since I've been on an architecture kick this week, I might as well finish up some thoughts:

Looking at the always fun Eyesore of the Month, I saw this rendering of the Google headquarters in Mountain View that I had not seen before: 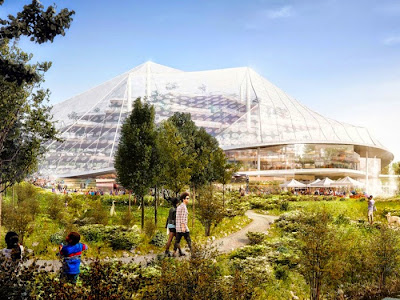 This, uh, structure, by Bjark Ingles and Thomas Heatherstone employs all the dishonest tropes of our time in order to achieve techno-narcissist lift-off: 1.) the idea that buildings should erase the boundary between being inside and outside; 2) that “nature” is the sovereign remedy for the failure to provide real urbanism; that space functions best when it lacks definition; that work is really just play; and perhaps most insidious, that the modular fabricated materials of today will age gracefully and be repairable. I would not bet on that outcome at all.

Eyesore of the Month, March 2015 (Kunstler.com)

What strikes me about this image is how isolated it looks. It is a unitary object on the landscape with no context. It is a world apart - a pleasure dome for the tech elite to live far away from the rest of us mere mortals. It looks like a film still from one of those 1970's post-apocalyptic utopian films - Logan's Run, Parts: the Clonus Horror, or possibly Zardoz (hey, these guys invented a food called Soylent so they wouldn't have to eat real food anymore - gets in the way of working). I guess the rest of us can look forward to being hunted down by Sean Connery supplied with guns by a giant floating stone head. Will the Exterminators break into the Google Vortex and kill the Immortal inhabitants who long for death?


The Forgotten Offices That Shaped Apple, Facebook, and Google (Gizmodo)

Indeed, all of these campuses - Google, Apple, Facebook, Amazon - look they are designed to create some sort of techno-utopian world apart. Instead of embedding businesses in the city, they are ethereal realms more suited to the elves of J.R.R. Tolkien than modern business. To me they just reinforce the elitism and megalomania that seems to drive computer programming these days. What kind of divorced-from-reality groupthink is this going to encourage? Is anyone here even going to interact with another real human being who isn't tech "genius?" It's amazing the lengths that they will go to separate themselves from the rest of us. It's bad enough that the tech industry gives off this air of elitism, of not being part of the wider society that it impacts, even as people are being priced out of homes in nearby cities and losing jobs to automation, without seemingly reinforcing it with their architectural choices. What sort of impression is this architecture trying to convey: Snobbishness? Elitism? Technological superiority? I doubt the rest of us rabble will be allowed to set up our homeless tents in these parks, and the only way to get there will be via Google private shuttle bus or the self-driving car:

Every rising industry spends massive amounts of money thinking their industry will endure forever. They might want to consider Ford's River Rouge plant, the Woolworth Building, and other relics of yesteryear.

Back to Google, the article above says the membrane takes its inspiration from the works of Frei Otto:

But was also allegedly inspired by another building. Apparently, they too read How Buildings Learn by Stewart Brand, in which he talks about Building 20 on the MIT campus, and how its simple nature led to innovation. I reviewed that book back in February unaware of that fact.

That building however, was a hastily-constructed temporary wood building put up to give engineers a place to work on radar during World War 2, so it's difficult to see the connection with Google's multi-billion dollar high tech under-the-dome Xanadu. Lloyd Alter wonders the same thing:


Page talked to his real estate team about the old Building 20 at the Massachusetts Institute of Technology, a 1940s wood-frame construction. It was ghastly to look at. But the “plywood palace,” as it was sometimes called, was beloved as an unruly nexus of interdisciplinary discovery. Wallboards and floors could be popped out and changed around, letting occupants—physicists, electronics researchers, linguists—mold their space however they wanted. Building 20 was a proto-incubator that begat a range of advances, from single-antenna radar to loudspeakers (Bose has roots there) to strobe photography, and was home to nine Nobel prize winners.

To encourage such innovation at the new Google headquarters, the building has modular components that will be moved around by "Crabots"- a cross between cranes and robots. However, one critic notes that “Flexibility can become really expensive.”

I wonder if they aren't missing the lesson of Building 20. Its occupants didn't make changes because of its inherently flexible design; they did it because it was cheap and old and temporary and nobody stopped them. Scientists were not afraid to make a mess of it. Professor Emeritus Paul Penfield is quoted in Wikipedia: "Its 'temporary nature' permitted its occupants to abuse it in ways that would not be tolerated in a permanent building. If you wanted to run a wire from one lab to another, you didn't ask anybody's permission — you just got out a screwdriver and poked a hole through the wall"

Bjark Ingels and Thomas Heatherwick are two very smart designers working for a very smart client, but the lesson of Building 20 is probably that one should build a cheap, fast and hackable building. That's essentially what Facebook did: it's a big quick and dirty cheap barn of an open plan building that went up in about the time Apple poured its basement. Perhaps Frank Gehry learned the real lesson from Building 20 after he replaced it with his disastrous Stata Center, which Stewart Brand called "overpriced, overwrought, unloved, unadaptable."

I wonder if employee meetings will look like this:


BONUS: I've covered this before but this article also from Gizmodo is a good one: Frank Gehry Says Architecture Today Is "Pure Shit" He ought to know.
Posted by escapefromwisconsin at 8:43 PM