This headline is all you need to know about the "unbiased" media: Greece's Crazy Leftists Have a Good Idea (Bloomberg Editorial)

Because anyone who would vote for anything besides the Neoliberal consensus must be "crazy," right?


Amid the populist rhetoric that propelled the far-left Syriza party to victory in Greece's parliamentary elections, there's one idea that Germany in particular should take to heart: revive growth in the euro area by giving the hardest-hit countries a break on their debts.

Er, far left? And what exactly makes them "far" left, pray tell? Do they want to seize the means of production? Nationalize major industries? And what is the "near" left? I guess they are the ones who are "sane" meaning they want to pay back every penny of the bankers' debts while letting the rich off scot-free and letting the country fall to pieces. THAT's the sane choice! The "sane" near-left and near-right have presided over this: 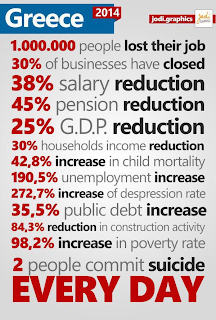 It's nice to see how unbiased the media is. Notice how if there's any crack in the Neoliberal consensus, the media is out front to tell us that the sky is falling. But in Greece, things can't get worse. So they're willing to break from the orthodox hive mind. Notice that the ideas of the "far left" were completely mainstream and were actually implemented all around the world during the last Great Depression with good results. Public works, job creation programs, debt writedowns, alternative currencies, cooperatives, and the like, were practiced by mainstream centrist left and right parties back then. Now those same ideas are derided as "crazy." What happened?

How dare the Greeks actually exercise their right to choose their own leaders! Here's a nice rundown of some of the hysteria stoked by the wealthy, corporate-controlled media:


As the Greek vote approached, one Austerian suggested that her countrymen stock up on toilet paper. The theory: The Tsipras’ crowd would turn Greece into another Venezuela, famous for the scarcity and rationing of consumer goods, including -- yes -- toilet paper.

So far, however, toilet paper crises haves tended to materialize only when Austerians are around. They are said to have imposed just such a shortage on Catalonian schoolchildren, for example.

And when Tsipras moved into the official residence, he found that even toiletries had been removed by the outgoing administration. “They took everything,” he said. “I was looking for an our to find soap.” No word on the toilet paper.

Even the BBC is in one the action: The middle-class voters who can't resist Karl Marx. OMG the Commies are coming!!! What's their evidence? One single person who told a reporter, "You probably think I'm really right wing," he added, apologetically. "I'm not, honestly, I'm very centrist. I love Marx." According to he BBC, this means the nation is governed by a party that "believes capitalism is a bad thing."

Really? However, just a few paragraphs before the BBC makes this assertion, they write of these crazy, far left anti-capitalist Marxist firebrands: "Syriza has chosen as its coalition partner not the communists - who you'd think might be their natural bedfellows - but a group called Independent Greeks? They're a centre-right anti-immigration party whose only common ground with Syriza is their shared opposition to the policies of austerity. On pretty much everything else they disagree."

Doesn't sound much like the second coming of Bolshevism to me, does it? But that's what the media needs to maintain. They need to make their ideas sound "crazy" and stoke the fears of the Western middle-classes (such as they are) or we might start to get some uncomfortable ideas, like maybe we don't need to be in debt to the 1 percent to issue our own currency, or be dependent upon them to "create jobs."


Political language, as George Orwell observed in 1946, is “designed to make lies sound truthful and murder respectable, and to give an appearance of solidity to pure wind”. Seven decades later, consider the way in which mildly progressive political leaders are depicted by their right-wing critics. In the US, Barack Obama, who has bragged about securing “the lowest level of domestic spending” since the 1950s, is condemned as a “socialist” by his Republican opponents. (If only.) In the UK, Ed Miliband, who supports a public-sector pay freeze and wants to slash child benefit, is dismissed as “Red Ed” in the right-wing press. (We wish.) In France, François Hollande, who has presided over the steepest spending cuts in that country in more than 40 years, is deemed to be “anti-austerity”. (Huh?)

Then there is Greece, where Syriza’s Alexis Tsipras, a mild-mannered, tieless civil engineer, was sworn in as prime minister on 26 January. Judging by the hysterical tone of the press coverage, you could be forgiven for assuming that the love child of Karl Marx and Che Guevara had been elected to office in Athens. “Far-left firebrand races to victory”, read a headline in the Times. “Shock waves across Europe as the far left sweeps to power in Greece”, shrieked the Daily Mail.

Syriza, we are told, by everyone from the Mail to the BBC and the Guardian, is a bunch of radicals, revolutionaries and extremists. It’s not centre left; it’s far left. In this bizarre inversion of reality, those who helped to inflict mass unemployment, widespread poverty and public-health emergencies – involving a succession of HIV, tuberculosis and malaria epidemics – on a once-developed western country are deemed to be the moderates and the centrists. Is any more evidence needed of how our political debate has become so skewed to the right?

After all, what is “extreme” about providing free electricity and food stamps to 300,000 Greek families now living below the poverty line, as Syriza has pledged to do? What is “revolutionary” about wanting to negotiate a restructuring of ballooning, essentially unpayable debts? Especially after austerity measures demanded by the unelected “Troika” (the European Central Bank, the European Commission and the International Monetary Fund) led to Greece’s public debt climbing from 126 per cent of GDP in 2009 to over 170 per cent of GDP in 2014. Is it “radical” to describe – as Tsipras has done – five years of relentless, growth-choking austerity, in which the suicide rate rose by 43 per cent, as a period of “humiliation and suffering”? Or to refer to Troika-enforced spending cuts – as Syriza’s Yanis Varoufakis, the new Greek finance minister, did – as a form of “fiscal waterboarding”?

Don’t be distracted by the “far left” smear. Syriza’s programme of debt relief, fiscal stimulus and financial support for the poorest, rather than the richest, is mainstream macroeconomics. The party is merely planning to do what the textbooks suggest.

Don’t let the ridiculous smears fool you: Syriza is no party of the radical “far left” (New Statesman) Opposing the logic of neoliberal economics does not mean the Greeks have become Marxists. Sorry BBC.

Posted by escapefromwisconsin at 8:48 PM