The theory behind [QE] is simple: Unable to cut the price of credit further, central banks shift their focus to expanding its quantity. The implicit argument is that this move from price to quantity adjustments is the functional equivalent of additional monetary-policy easing. Thus, even at the zero bound of nominal interest rates, it is argued, central banks still have weapons in their arsenal.

QE’s impact hinges on the “three Ts” of monetary policy: transmission (the channels by which monetary policy affects the real economy); traction (the responsiveness of economies to policy actions); and time consistency (the unwavering credibility of the authorities’ promise to reach specified targets like full employment and price stability). Notwithstanding financial markets’ celebration of QE, not to mention the US Federal Reserve’s hearty self-congratulation, an analysis based on the three Ts should give the ECB pause.

In terms of transmission, the Fed has focused on the so-called wealth effect. First, the balance-sheet expansion of some $3.6 trillion since late 2008 – which far exceeded the $2.5 trillion in nominal GDP growth over the QE period – boosted asset markets. It was assumed that the improvement in investors’ portfolio performance – reflected in a more than threefold rise in the S&P 500 from its crisis-induced low in March 2009 – would spur a burst of spending by increasingly wealthy consumers.

The Lemmings of QE (Project Syndicate)

Ian Welsh points out that all the money from quantitative easing has worked - it has made the rich richer and had no effect on the rest of us except to make real estate too expensive for anyone by the rich to buy:


One of the great “mysteries” of the last 7 years or so is why all the money from unconventional monetary policy hasn’t shown up as inflation.  Many analysts thought that printing that much money must surely increase prices, but inflation indices in most of the developed world are barely up, and in many cases are flirting with deflation.

The answer is obvious, but you’ll hardly see anyone point it out.

First, who was the money given to?

Ok then, what do rich people and corporations spend their money on?  Stocks, and real estate—high end real estate...Inflation has, then, shown up exactly where one would expect, in the assets bought by the people who were given money.  Ordinary people did not receive the largesse from unconventional monetary policy, rich people and corporations did.

That inflation has not shown up in much (though not all) of the rest of the economy is simply based on the fact that no one else except the rich and corporations has received (I can’t call it “earned”) more money.  Nothing more, nothing less.

This economy is entirely artificial. It is based on giving money (in various ways) to those who already have a lot of it.  This is in no way a competitive market, certainly not a free market, and barely deserves to be called a market at all.  It is pure oligarchical abuse of the power of printing money in all its modern guises.

This is what happens when money is controlled by small elite not beholden to the public interest at all. And the effects are not just soaring stock prices but more expensive real estate as a now international class of wealthy oligarchs buys up the world's premier real estate and using them as virtual gold bars to store their ill-gotten wealth:


Racine is the latest victim of what some have called “lights-out London” where absentee owners push up property prices without contributing to the local economy. When Racine opened in 2002 the average price of a Knightsbridge home was £745,000; now it is £3.4m. There are an estimated 22,000 empty properties in London, partly a consequence of the city’s status as what the novelist William Gibson has called “the natural home of a sometimes slightly dodgy flight capital”. As Racine’s story shows, some businesses are feeling the effects.

Absenteeism as a problem is peculiar to the smudge of “super-prime” London around Harrods (although there are pockets elsewhere, such as Highgate). In a survey by the Empty Homes Agency last year, Kensington and Chelsea was found to have had a 40% annual increase in empty properties, the only area in southern England to show such an increase. Other boroughs on the list were mainly in poor parts of the north and north-west. The idea of the most expensive homes sitting empty is provocative in a city where any kind of property ownership is increasingly out of reach and politicians are moving to act.

Writing in the Independent, Tessa Jowell, who hopes to be Labour’s candidate in the capital’s mayoral contest next year, called empty homes a “scandal” and promised punitive taxes for their owners if she is elected. “Today in London hundreds of thousands of people are stuck in temporary accommodation, on social housing waiting lists, or years of saving short of buying their first home. At the same time the global super-rich buy London homes like they are gold bars, as assets to appreciate rather than homes in which to live … Absentee owners should live in the house they own or sell up – or face uncapped charges until they do. No dodges or clever schemes to get round that.”


Here’s the first problem to overcome, particularly with the president’s focus on the middle class: we have two housing markets, one for the rich and one for the rest. The only home sales growing are for million-dollar properties. Home purchases made entirely in cash are historically high.

Simply building more homes and increasing the supply of houses won’t bring down prices. The homes being built are bigger than ever, and increasingly designed for the luxury market.

Consider this incredible statistic from the research analyst Redfin: through last April, sales of the McMansions of America – the top 1% of homes by price – rocketed up 21% compared to last year. But sales of the other 99% of homes were down 7.6%.

It’s not even clear that rising home prices – traditionally a way to measure a recovery – would be good for the middle class. Price increases harm the affordability of homes, particularly for first-time homebuyers, who have not returned to the market at their historical level. This is an important group: first-time homebuyers drive the entire market, allowing sellers to step up into bigger homes.

A tale of two housing markets: mansions for the rich while poor are priced out (Guardian)

Much of this presages a return to Neofeudalism - instead of broadly distributed ownership, the rich will own all land and housing, and the rest of us will be "serfs" perpetually in debt to them from the day we're born and paying all of our income for the necessities of life, which the rich will own outright. 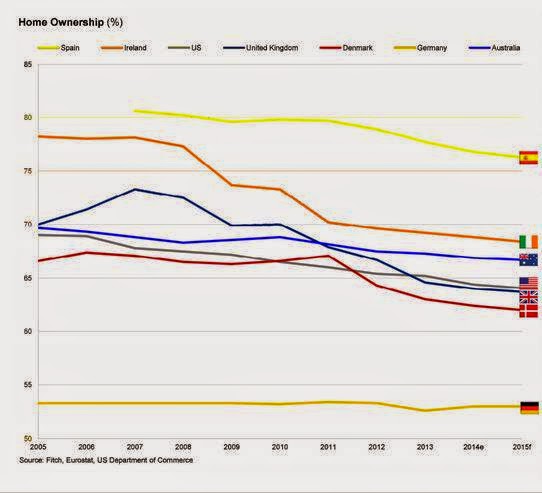 Which has, of course, been the goal all along.
Posted by escapefromwisconsin at 9:02 AM