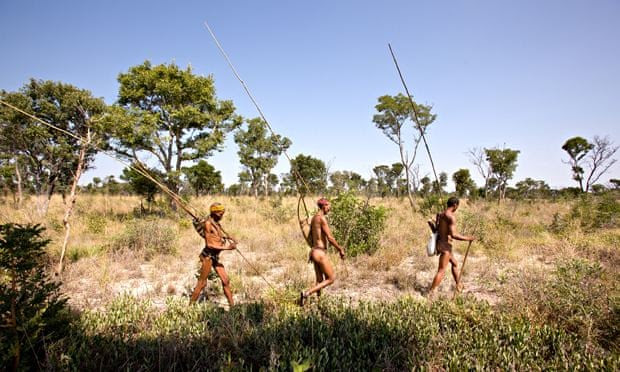 The last remaining feral humans and the planet are being systematically hunted down and destroyed. The dominant culture cannot allow any alternative:


Some 22,000 years ago, they were the largest group of humans on earth: the Khoisan, a tribe of hunter-gatherers in southern Africa.

Today, only about 100,000 Khoisan, who are also known as Bushmen, remain. Stephan C. Schuster, professor at Nanyang Technological University in Singapore, has published new research about the tribe, many of whom now live in poverty, their cultural traditions endangered. We spoke to Schuster about his study and the lives of the Khoisan.

How did it happen that a group that was once in the majority is now so small?

First of all, the fact that 7 billion people now live on earth makes it almost impossible for us to understand how few people lived in the past. About 10,000 years ago, there were not more than 1 million on the planet. And 100,000 years ago, only a few 10,000s. The whole genome sequences we analyzed show that there was a time when the non-Khoisan peoples were not doing as well as the Khoisans.

What happened to tip the balance?

Changes in the climate. Before 22,000 years ago, the southern part of Africa where the Khoisan lived was wetter, with more precipitation, compared to the dryer western and central parts of the continent where other groups lived. A dryer climate meant fewer wild game and less food, which translates into fewer children. So other populations dropped significantly while the Khosian's population stayed about the same. But after the last ice age ended, the climate changed, and for reasons we don't understand the other African populations expanded, and the exponential growth of humans across the earth began.

How do the Khoisan maintain their way of living today?

The answer is they don't. We are seeing the end of their culture and their hunter-gatherer lifestyle, which is being replaced by herding and agriculture.

In Botswana, there is a law that the hunter-gatherers cannot hunt anymore. There are land disputes and in many cases they are being pushed off the land they used to hunt or consider sacred. They are considered lowlifes in society and have very little political representation. In many ways this replicates what happened to the indigenous people of North America, who by the way were also hunter gatherers.

What about other skills and types of knowledge particular to the Khoisan?

They have incredible knowledge about animal behavior and about the environment. Where you and I would only see plants and scrub and thorn and dry wood, they see a lot of things you can eat. If you walk with a Bushman in the bush, he is constantly eating because he always finds something to nibble or chew on, and of course this is precious knowledge that we don't have. This is also their pharmacy, the herbs or the natural substances within the plants that will help them when they have ailments. Even the elders have absolutely pristine hearing and clear vision. And I think it is understandable if your life depends on your hunting skills.

The Khoisan Once Were Kings Of The Planet. What Happened? (NPR)


For Jamunda Kakelebone, a 39-year-old bushman, or San, whose family has always lived as hunter gatherers, what is happening in the Kalahari desert is deeply disturbing. Not only have bushmen families like his been moved from their ancestral land to make way for tourists, diamond mining and fracking, he says, but those who remain are now no longer allowed to hunt.

The final blow came in January, when a ban came into effect prohibiting all hunting in the southern African country except on game farms or ranches. The new law – announced by the minister of wildlife, environment and tourism, Tshekedi Khama (brother of the president, Ian Khama) – effectively ends thousands of years of San culture.

Botswana bushmen: 'If you deny us the right to hunt, you are killing us'  (Guardian)


The prospect of returning home without interviews is unthinkable. My ruse is to distract my captors.

I sit them down for a meal of pasta and vegetables - and brimming beakers of spiced rum - in front of my laptop, which is playing an Ethiopian comedy. After saying good night I strike out through the scrubland.

I run without sense of direction through bush and bog, crawl under fences, and negotiate large herds of noisy cattle. I have to find a village elder I met earlier, and interview him before policemen and their flashlights turn up. So I am relieved to stumble on two boys milking their cows in the moonlight. They lead me to the elder's hut. The sound of so many rudely-awakened animals in our wake fills me with dread that searchlights are heading our way.

The moment arrives. I squat in front of the elder inside his mud dwelling, surrounded by his sleeping companions: several cows, a goat and a cat. My dictaphone is poised to record truths heard by few journalists in this media-muzzled region. I ask him in broken Amharic what is going on. He tells me: "The government is telling us to sell our cattle and modernise like townspeople - they say our land is the property of the sugar corporation. We have not been asked what we want or need.

"If we do not accept the resettlement plans, we'll be taken to jail. How can we survive if we have no access to land, cattle or water?"

I promptly thank the elder for his time, apologise for disrupting his evening and head back to my open-air jail. On reaching my hammock I find several dozing policemen and an empty bottle of rum. Mission accomplished.

The people pushed out of Ethiopia's fertile farmland  (BBC)


Here in the birthplace of humanity in Northern Tanzania, the Hadza have lived sustainably off of the bounty of their homeland, roaming as they needed to find game, tubers and wild berries, for at least 50,000 years. But this unique indigenous group, known for shunning material possessions and social hierarchy, is at great risk of losing the elements that have allowed them to thrive for so long. Vast changes to the lands and wildlife populations that the Hadza need to survive threaten to extinguish their unique way of life and vibrant culture. These threats, mainly agriculture, disrupt their landscape and the natural resources that they depend on for survival.

Hope for the Hadza: Protecting one of the world's last hunter-gatherers (Treehugger)


The Tanzanian government's ambition to turn 1,500-square-kilometers of land into a hunting reserve for an Emirati hunting company catering to the royal family of the United Arab Emirates has led to severe criticism from some global activist groups including Avaaz. The global activist groups started a campaign in 2013 to draw global attention to the Tanzanian government's "plans to kick thousands of [Masai] families off [of their] lands so that wealthy tourists can use them to shoot lions and leopards."


Indigenous peoples suffer the greatest suicide risk among cultural or ethnic groups worldwide. Australian Aboriginal and Torres Strait Islander men ages 25 to 29 have a suicide rate four times higher than the general population in that same age group in Australia, according to the country’s Department of Health.

In the United States, suicide is the second leading cause of death, behind accidents, for American Indian and Alaska Native men ages 15 to 34, and is two and a half times higher than the national average for that age group, the Centers for Disease Control and Prevention reports.

Among the indigenous in Brazil, the suicide rate was six times higher than the national average in 2013, according to a study released in October by Brazil’s Ministry of Health. That translates into 30 suicides per 100,000 people. Among members of the Guaraní tribe, Brazil’s largest, the rate is estimated at more than twice as high as the indigenous rate over all, the study said.

The Guaraní have long made their home in the fertile land of Brazil’s southwest, where swaths of vast forests and savannas have been transformed into farms and ranches. In the process, the tribe has been dispossessed and uprooted from its traditional way of life. Many in the tribe face extreme discrimination and live in abject poverty close to the farmers and ranchers who occupy land that was once theirs.

“Living in this nonplace, they commit suicide,” said Maria de Lourdes Beldi de Alcantara, an anthropologist at the University of São Paulo who for years has studied adolescent suicides among the Guaraní.

Nearly 100 years ago, the Guaraní, who today live primarily in Brazil and Paraguay, were forced off their ancestral land when the Brazilian government granted farmers and ranchers the legal title to that land. Tribe members were placed in crowded reservations, and often separated from family members.

Then, in 1988, the Brazilian government created a new Constitution that established rights for indigenous people. Among them: giving Guaraní and other indigenous families the right to repossess their ancestral land, a process that has been slow and frustrating for both Indians and farmers and that has put them even more at odds.

In many cases, farmers, too, have lived in Mato Grosso do Sul for generations. They raised their families there, and worked and profited from the land, first from maté (a kind of tea), and later from sugar cane and soybeans. Like the Guaraní, they are rooted in the land, making the conflict between landowners and the Guaraní both cultural and material. Where the indigenous see repossession of their ancestral land as integral to revitalizing their cultural traditions and regaining their sense of well-being, ranchers and farmers view it as a hindrance to Brazilian progress and development.

BTW, I had not heard of this before, has anyone else - The Selknam Genocide (Wikipedia)?


In the 1880s, British introduced sheep ranches to the large open areas of Tierra del Fuego. Numerous British immigrants arrived to work in the new industry, the descendants of some of whom today remain in the Falkland Islands. The ranches created strong conflicts with the Selk'nam natives, who had traditionally hunted this territory and considered the sheep game. They had no concept of European property rights. The large ranchers tried to run off the Selk'nam, then began a campaign of extermination against them, with the compliance of the Argentine and Chilean governments. Large companies paid sheep farmers or militia one pound sterling per Selk'nam dead, which was confirmed by the redemption of a pair of hands or ears, or later a complete skull.

Repression against the Selk'nam persisted into the early twentieth century. Chile moved some Selk'nam to Dawson Island, confining them in an internment or concentration camp. Argentina finally allowed Salesian missionaries to aid the Selk'nam and attempt to assimilate them, but their culture and people were largely destroyed. The last full-blooded Selk'nam, Ángela Loij, died in 1974. They were one of the last aboriginal groups in South America to be reached by Europeans. Their language, believed to be part of the Chonan family, is considered extinct as the last speakers died in the 1980s.

I guess it's just the price of "progress."
Posted by escapefromwisconsin at 7:45 PM