Sometimes you have to wonder if the ancients knew more than we thought, and I'm referring to more than the Antikythera Mechanism - see these links:

Ancient Egyptian technology may be our first line of defense from hospital infections. (Daily Kos)


Copper definitely wipes out microbes. "Bacteria, yeasts and viruses are rapidly killed on metallic copper surfaces, and the term "contact killing" has been coined for this process," wrote the authors of an article on copper in Applied and Environmental Microbiology. That knowledge has been around a very long time. The journal article cites an Egyptian medical text, written around 2600-2000 B.C., that cites the use of copper to sterilize chest wounds and drinking water.

I've been to many presentations that have recommended the use of copper in health care environments for its germ-killing properties. Too bad we're running out of the stuff. Naked Capitalism adds: "Remember the Three Magis’ gifts of frankensense, gold and myrrh? Myrrh, a natural antibiotic, was the most expense of the three at the time." According to WebMD, myrrh is used for "...indigestion, ulcers, colds, cough, asthma, lung congestion, arthritis pain, cancer, leprosy, spasms, and syphilis. It is also used as a stimulant and to increase menstrual flow. Myrrh is applied directly to the mouth for soreness and swelling, inflamed gums (gingivitis), loose teeth, canker sores, bad breath, and chapped lips. It is also used topically for hemorrhoids, bedsores, wounds, abrasions, and boils. In foods and beverages, myrrh is used as a flavoring component. In manufacturing, myrrh is used as a fragrance, in incense, and as a fixative in cosmetics. It is also used in embalming." Sounds a lot more useful than gold. Honey was also used as a common antibiotic.

But the Egyptians were hardly unique. The ancient Nubians brewed beer laced with antibiotics:


Tetracycline latches on to calcium and is deposited in bones so it can be detected in fossils. In 1980, Armelagoa discovered what appeared to be traces of tetracycline in human bones from Nubia dated between A.D. 350 and 550, populations that left no written record. Armelagos and his fellow researchers later tied the source of the antibiotic to the Nubian beer. The grain used to make the fermented gruel contained the soil bacteria streptomyces, which produces tetracycline.

Mr Nelson said: ‘The bones of these ancient people were saturated with tetracycline, showing that they had been taking it for a long time. ‘I'm convinced that they had the science of fermentation under control and were purposely producing the drug.' Even the tibia and skull belonging to a 4-year-old were full of tetracycline, suggesting that they were giving high doses to the child to try and cure him of illness, Nelson says.

The first of the modern day tetracyclines was discovered in 1948. It was given the name auereomycin, after the Latin word 'aerous,' which means containing gold.

Ancient Nubians took antibiotics in their beer almost 1,500 years ago (Daily Mail) But even as far back as 70,000 years ago, humans were using the natural properties of plants to ward off insect pests:


The oldest known bedding — sleeping mats made of mosquito-repellant evergreens that are about 77,000 years old — has been discovered in a South African cave.This use of medicinal plants, along with other artifacts at the cave, helps reveal how creative these early peoples were, researchers said.

An international team of archaeologists discovered the stack of ancient beds at Sibudu, a cave in a sandstone cliff in South Africa. They consist of compacted stems and leaves of sedges, rushes and grasses stacked in at least 15 layers within a chunk of sediment 10 feet (3 meters) thick.

"The inhabitants would have collected the sedges and rushes from along the uThongathi River, located directly below the site, and laid the plants on the floor of the shelter,"said researcher Lyn Wadley, an archaeologist at the University of the Witwatersrand in Johannesburg, South Africa.

Many of the plant remains are species of Cryptocarya, evergreen plants that are used extensively in traditional medicines. The beds appeared to be mostly composed of river wild-quince (Cryptocarya woodii), whose crushed leaves emit insect-repelling scents.

"The selection of these leaves for the construction of bedding suggests that the early inhabitants of Sibudu had an intimate knowledge of the plants surrounding the shelter, and were aware of their medicinal uses," Wadley said. "Herbal medicines would have provided advantages for human health, and the use of insect-repelling plants adds a new dimension to our understanding of behavior 77,000 years ago."

the inhabitants repeatedly refurbished the mats. Starting about 73,000 years ago, the site's inhabitants apparently also burned the bedding regularly, "possibly as a way to remove pests," Miller said. "This would have prepared the site for future occupation and represents a novel use of fire for the maintenance of an occupation site."

These mats were used for more than just slumber. "The bedding was not just used for sleeping, but would have provided a comfortable surface for living and working," Wadley said.

World's Oldest Bedding Discovered in Cave (Live Science) And here are a couple examples of ancient building from Lloyd Alter: 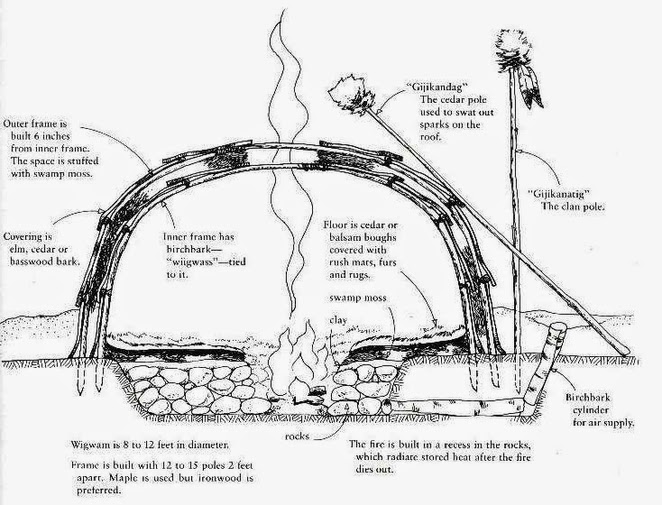 Both Ted and Paul showed this image of what they considered to be a really smart house: a wigwam, as built by the Algonquin and Chippewa. And it is really sophisticated:
This is more sophisticated than about 99% of modern houses, where the insulation is between the studs which act as a thermal bridge. It is more like the staggered studs or double walls used in Passive houses.

Then there is the heating system:
This again is more sophisticated than many heating systems that don't have a provision for makeup air. It even has a fire suppression system: a long cedar pole for swatting out sparks on the roof.


The Pantheon looks pretty good for a 1900 year old building, considering that it is the largest unreinforced concrete dome in the world. Perhaps it's because it was not reinforced, so there was no iron to rust and expand, or perhaps because Roman concrete was different than the stuff we use today. TreeHugger has noted before that Roman concrete was a whole lot greener than today's mixes; now a new study by researchers at the Berkeley Lab shows that the concrete actually gets stronger over time. Unlike modern concrete which actually shrinks, opening up tiny cracks that propagate and let moisture in, Roman concrete, made with volcanic ash instead of portland cement, is actually self-healing as a crystalline binder forms and prevents the concrete from cracking any further... So not only would concrete made with volcanic ash have a much lower carbon footprint, It would last a lot longer.

The making of cement accounts for as much as 7% of the CO2 produced each year; the amount of the stuff being poured these days is extraordinary. Vaclav Smil tells Bill Gates that the statistic shown above is the most staggering in his book, Making the Modern World: Materials and Dematerialization. We use far too much of the stuff and it doesn't last nearly as long as we thought it would. Time for a change.

Why has Roman concrete lasted so long? (Treehugger) and Can India's Ancient Stepwells Help Solve the Country's Water Crisis? (CityLab) 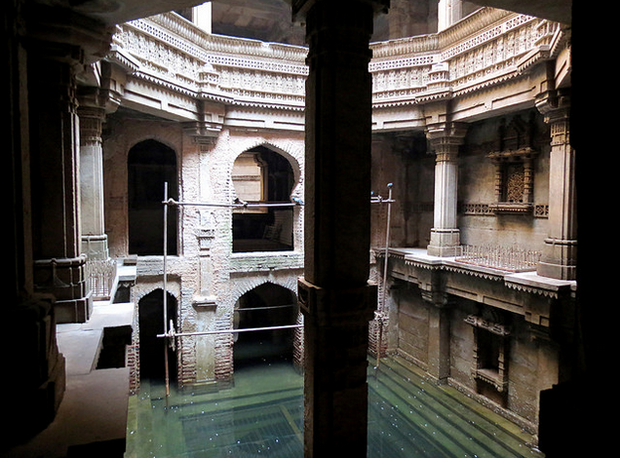 Emerging somewhere around the fourth century A.D., stepwells guaranteed a year-round water supply for drinking, washing, and irrigation to villages, particularly in the semi-arid states of Gujarat and Rajasthan. By the 11th century, they'd become canvases for grand, stylistically diverse architectural visions, and served purposes well past the utilitarian.

For women, to whom the task of gathering water often fell, these were (and in many cases remain) places for social gathering. Some were (and again, remain) consecrated temples, with elaborate carvings of deities encircling the walls. Stepwells were true monuments of—and to—civic life.

But with the 19th-century arrival of the British raj, stepwells began a descent into obsolescence. Deemed unhygienic, they were replaced with modern plumbing, taps, and storage tanks. Many were filled in, or simply abandoned to decay and trash-dumping. And while some do continue to serve as social and religious sites, these days most stepwells are dry, as a result of unregulated tapping—a culprit in India's current water crisis.

BONUS: Was this the first calendar? Mysterious 3,600 year disc that let ancient farmers track the seasons (Daily Mail)
Posted by escapefromwisconsin at 3:38 PM