Who Was Ned Ludd? 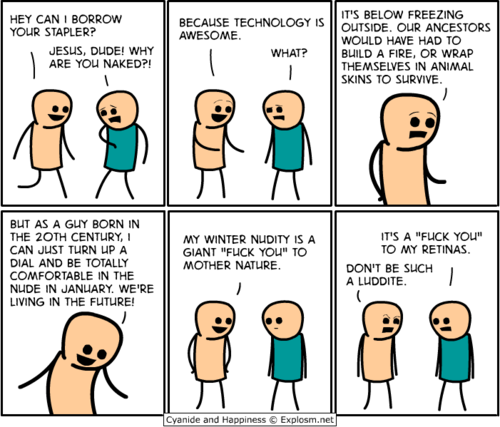 Excellent article on Vice Motherboard about the Luddites: You've Got Luddites All Wrong. The article points out that the term "Luddite" is almost universally used today as a smear term to mean "technophobe" - someone who is afraid of, inept at, or fundamentally opposed to the use of any new technology. It also notes that use of the term has spiked along with new technology.

But the actual Luddites weren't that at all. They were a guerrilla labor movement opposed to the destructive effects of technology on the British working classes and society in general. The machines of the time produced inferior goods with less workers, and the effects on the workers' livelihoods were simply brushed aside.

And the Luddites weren't wrong - wages and workings conditions fell until at least the 1850's. The Luddite revolt was four decades prior to that 1811-1817. So an entire generation of workers was thrown under the bus.

The revolt was the only way to address these concerns in England where wealthy property owners controlled the political apparatus. As I always point out, it was never a question of whether the new technology would be deployed of not - that was simply a response to increasing surplus from colonial endeavors (and later fossil fuels). The question was how that would be integrated into society and who benefited from it. We're still living with the results.


To the extent that we're made to conceive of the actual Luddites—19th century textile workers who smashed machines in protest of the disruptive effects of the Industrial Revolution—we have remembered them as a lot of dim malcontents who bashed technology in factories because they were afraid of the encroaching modern world. Luddism is always portrayed as a knee-jerk reaction to technology; a brash, unthinking recoil.

But far from this conception of doddering conservatives who blindly smashed gadgets they didn't understand, the Luddites were actually well-organized guerrilla activists who fought a pointed and trenchant battle to protect their livelihoods.

"Luddism," the sociologist Donald MacKenzie writes, "was neither mindless, nor completely irrational, nor completely unsuccessful." [...] And, there's ample evidence that, contrary to common perception, their tactics were, for a while at least, calculated, well-planned, and rather effective.

"[T]he Luddites did indeed understand the advantages which mechanization would bring," Raymond Boudon, a sociologist at Paris-Sorbonne University, wrote in his Analysis of Ideology, citing the work of influential historian Lewis Coser. But "their machine-wrecking was an attempt to show the owners of the new textile mills that they were a force to be reckoned with, that they had a 'nuisance value'. By acting in this way, their main objective was to gain concessions from the employers."

The Luddites weren't technophobes, then. They were labor strategists...The Luddites' acts of sabotage were enormously successful in drawing attention to the plight of the skilled tradesman, who faced obsolescence before the mechanizing powers of the Industrial Revolution, and they enjoyed widespread support from their communities. A specific law making machine wrecking punishable by death had to be passed in Parliament, and, according to [Historian Eric] Hobsbawm, a force of 12,000 troops were dispatched to put the movement down by force, wherever necessary.

The article concludes by pointing out that we are in a very similar situation today with new forms of technology displacing jobs and livelihoods, the benefits flowing exclusively to the wealthy, and the negative consequences to workers being dismissed and ignored wholesale by a political apparatus owned and controlled by the wealthy.

Thus, Luddites are relevant once again. If you are a Luddite you are not opposed to new technology per se. You are not a technophobe. Rather, you are opposed to the destructive effects of technology on society and overall human well being. You want technology to be deployed in a life-affirming way, not one that grinds us down even more.You want the end result of technology to be human flourishing, rather than turning humans into unwilling mechanical slaves of a technological agenda designed around profit.

That's why I talk about things like shorter work weeks, universal basic income, distributed ownership, regulations and the like. I do it because I'm a Luddite and proud of it.


Luddites should remind us that we need good policies to smooth the road ahead, so we don't strand our skilled workforce when robots and algorithms usurp their employment. Nearly half the world's jobs are poised to fall to automation, remember, and only the rich currently stand to benefit.

Which is to say, stop calling people who caution about the deleterious effects of Google Glass 'Luddites'. Stop applying the label to anyone who hates social media. Stop thinking of Luddites as dopey old-timers who get frustrated that they can't program the DVR. Instead, perhaps, step away from the scolding modern mythology, and ask a different kind of question:

Are you a fierce labor activist, willing to risk life and limb to destroy the mechanical implements of your impending poverty, to protest the loss of your livelihood? Then you might actually be a Luddite, according to history. And there may be more of you out there than you think.

See also Canut Revolts (Wikipedia), a similar movement in France 1831-1848, and the Petroleum Revolution (Wikipedia) in Spain in 1873. Ever heard of them? Probably not, because much of the history of capitalism has vanished down the memory hole in favor of the triumphalist propaganda of the economics profession. In each case, the government came in to put down workers on behalf of the owners. Had that not happened, we would still be enjoying the fruits of increased productivity, just under a very different political regime and distribution of wealth/ownership. So much for the "free" market.
Posted by escapefromwisconsin at 9:48 AM