The Labor Market Is Broken

There have been some very good articles worth reading lately about one of our hobby horses, Universal Basic Income:


Conservatives...typically propose policies that would slash social insurance while sharply cutting taxes on the rich. And even fairly liberal Democrats are uncomfortable with programs that straight-up transfer cash unless it goes to retired people; recall that it was President Clinton who "reformed" traditional welfare into a program that helps almost no poor people.

However, it is a mistake to view these attitudes as cast in stone. The idea that work is a bedrock of society, that absolutely everyone who is not too old, too young, or disabled must have a job, was not handed down on tablets from Mount Sinai. It is the result of a historical development, one which may not continue forever. On the contrary, based on current trends, it is already breaking down.

The history of nearly universal labor participation is only about a century and a half old. Back in the early days of capitalism, demand for labor was so strong that all the ancient arrangements of society and family were shredded to accommodate it. Marx's Capital famously described how women and very young children were press-ganged into the textile mills and coal mines, how the nighttime was colonized for additional shifts, and how capitalists fought to extend the working day to the very limits of human endurance (and often beyond).

The resulting misery, abuse, and wretchedness were so staggering, and the resulting class conflicts so intense, that various hard-won reforms were instituted: the eight-hour day, the weekend, the abolition of child labor, and so forth.

But this process of drawing more people into the labor force peaked in the late 1990s, when women finally finished joining the labor force (after having been forced out to make room for returning veterans after World War II). The valorization of work as the source of all that is good in life is to a great degree the result of the need to legitimate capital's voracious demand for labor.

These days, capital's demand for labor is looking very, very soft...when you acknowledge that the U.S. is no longer the land of opportunity…. The fundamental bargain of American society is that for anyone willing to hustle, there is a decent job to be found, or one that will at least prevent abject destitution. It underpins our national mythos as the land of opportunity and self-reliance. It has always been less true than anyone wanted to admit, but for an increasingly large fraction of the population–start with the 16 percent of Americans who regularly don’t have enough to eat–it’s a sick joke…. One can easily imagine the historical process described by Marx going in reverse. In today’s labor market, where there are still twice as many job seekers as job openings, the constant conservative carping about the ‘dignity of work’ sounds more jarring and vindictive by the day. As someone with a nice, stimulating job, I agree that work can help people flourish. But in an economy that is flatly failing to produce enough jobs to satisfy the need, a universal basic income will start to seem more plausible–even necessary.

America is running out of jobs. It's time for a universal basic income (The Week) The politics of a guaranteed income get a lot easier when you acknowledge that the U.S. is no longer the land of opportunity. Personally I never understood this "we need jobs to have dignity" nonsense. Going to work does nothing but make me tired and unhealthy and give me suicidal thoughts. Those effects tend to mysteriously vanish when I'm not chained to my desk for eight hours a day.

This article argues that calls for a UBI are actually counterproductive because it is unrealistic and distracts from efforts to reform the system we already do have:


On Twitter I said: “The basic income movement is an attack on the strongest political pillar of social-democracy: social insurance.” I’ve inveighed against the Universal Basic Income in the past, so here I go again. Another edition of old man yelling at clouds.

In defense of social insurance (MaxSpeak) Steve Waldman, however, disagrees with this:


Sawicky’s view sounds reasonable, if your view of the feasible is backwards looking. But your view of what is feasible should not be backwards looking. The normalization of gay marriage and legalization of marijuana seemed utopian and politically impossible until very recently. Yet in fact those developments are happening, and their expansion is almost inevitable given the demographics of ideology...Within living memory, the United States had a strong, mass-participatory labor movement, and like many on the left, I lament its decline. But reconstruction of the labor movement that was, or importation of contemporary German-style “stakeholder” capitalism, strike me as utopian and infeasible in a forward-looking American political context.

I think that UBI — defined precisely as a periodic transfers of identical fixed dollar amounts to all citizens of the polity — is by far the most probable and politically achievable among policies that might effectively address problems of inequality, socioeconomic fragmentation, and economic stagnation. ..UBI is the least “statist”, most neoliberal means possible of addressing socioeconomic fragmentation. It distributes only abstract purchasing power; it cedes all regulation of real resources to individuals and markets. It deprives the state even of power to make decisions about to whom purchasing power should be transferred — reflective, again, of a neoliberal mistrust of the state — insisting on a dumb, simple, facially fair rule. “Libertarians” are unsurpisingly sympathetic to a UBI, at least relative to more directly state-managed alternatives.

But if “political feasibility” is to be our touchstone, if that is to be the dimension along which we evaluate policy choices, then past existence of a program, or its existence and success elsewhere, are not reliable guides. An effective path forward will build on the existing and near-future ideological consensus. UBI stands out precisely on this score. It is good policy on the merits. Yet it is among the most neoliberal, market-oriented, social welfare policies imaginable. It is the most feasible of the policies that are genuinely worthwhile.

The political economy of a universal basic income. (interfluidity) Here is Max's response.


In general I have no problem with providing unconditional cash money to the poor rather than in-kind benefits. The problem of course is that we have in-kind benefits for food and housing because of the historic, political weakness of free-standing cash assistance. So we need a political environment that would be conducive to some kind of conversion.

I believe SRW’s characterization of the libertarian impulse is wrong. At its root I would say is not some desire for minimal bureaucracy and free choice, but a drive to drown a whittled-down welfare state in the bathtub. If you don’t like bureaucracy, try not to spend much time dealing with private health insurance companies. The Koch-fueled libertarians use UBI to trash existing programs and advocate a wholesale trade. Big government for all its flaws provides some measure of protection from predators that abound in the private sector.

SRW says the UBI is social insurance. It’s America, and we are all entitled to our own definitions. So what exactly is social insurance? It’s not clear. SRW claims the support for a program depends on the extent to which its benefits are general to the politically-enfranchised. Well sure, but what was it about the program that won the support of the politically-enfranchised in the first place? I still think it’s the contributory rubric. FDR thought so too.

Economic security and “the great disturbing factors of life”  (MaxSpeak)


We need only look around us at all the work being done for free, to see that people do choose to work even when not forced to work. Just look at open collaboration accomplishments like Wikipedia and Creative Commons. Look at open source achievements like GNU/Linux and its derivative Android. Look at all of the volunteers in our local communities (every month nearly 2 million volunteers dedicate more than 8.4 million hours of their time to hunger relief alone), or even within our own homes at the unpaid parental labor that raised us. Unpaid labor is everywhere.

It’s important to also not look at the flawed welfare system that exists today and see it as evidence that people won’t work without force. Our current system creates welfare traps where the removal of benefits as income rises results in little to no net gain. Would you work if you were living in poverty and a minimum wage job meant keeping fifteen cents for every dollar gained through your efforts? It is exactly this trap we need to remove by not clawing money back from people who are seen as no longer needing it badly enough.

People work. People will always work. Even when half of our jobs have been entirely replaced by hardware and software at some point in the next 20 years, people will continue to work. The work will just be different and not necessarily involve monetary exchanges. We need not require anyone be involuntarily forced to work for work to be done.


To put this in plain English: poor people tend to use money on their basic pressing needs, and then use money in some wealth-building ways. Which is the same way that you, the person very concerned about the profligate spending tendencies of the poor, would probably use it. It's almost as if "poor people" are just people like everyone else and tend to behave, like humans do, by addressing their own needs and trying to figure out ways to provide for their families—things that are infinitely easier to do if one has a base of wealth to help accomplish them.

The popular image of the "Welfare Queen" is one that is seared in the mind of many Americans. No big surprise, since countless millions of political advertising dollars were used to put it there. Nevertheless, evidence shows that the welfare state in the US, to the extent that we have one, works—that giving poor people tax breaks, and social welfare, and, yes, cash aid helps to bring people out of poverty and allows them to lead more bearable lives. Likewise, you might be interested in this story about a Canadian experiment with providing citizens of one town with a guaranteed minimum income, which was a big success, and did not produce any extra laziness in the populace.

Poor People Do Not Just Blow Any Money They Get (Gawker)

Americans Won't Relax, Even Late at Night or on the Weekend (Atlantic) On a typical weeknight, a quarter of U.S. employees did some kind of work between 10 at night and six in the morning. So thanks to technology, you're either working 24 hours a day or not working at all. Progress! 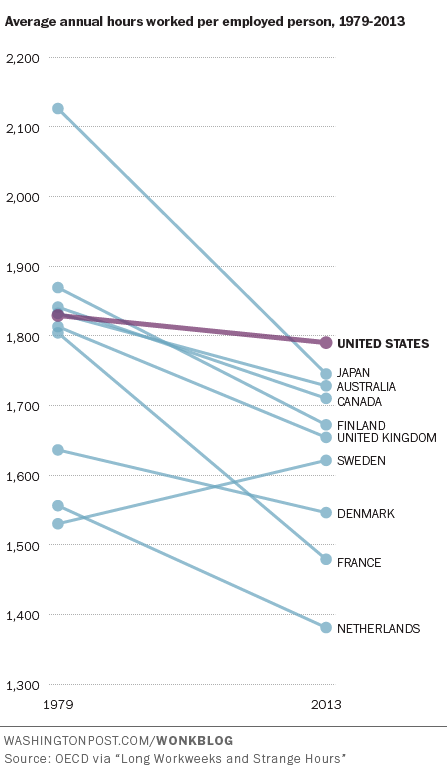 "Adults employed full time in the U.S. report working an average of 47 hours per week, almost a full workday longer than what a standard five-day, 9-to-5 schedule entails. In fact, half of all full-time workers indicate they typically work more than 40 hours, and nearly four in 10 say they work at least 50 hours."

That’s because salaried employees work longer hours than hourly workers (49 vs. 44 hours per week, respectively) and because many workers are being forced to take on more than one job (12 percent of full-time workers have two jobs, and 1 percent have three or more). However, even restricting the analysis to full-time workers who have only one job, the average number of hours worked is 46—still well over 40.