Dispatches from the class war

In 1988, the typical American adult was 40 years old, white and married, with a high school diploma. If he was a man, he probably worked full time. If she was a woman, she probably didn’t.

Twenty-five years later, Americans are older, more diverse and more educated. We are less likely to be married and more likely to live alone. Work is divided more evenly between the sexes. One thing that hasn’t changed? The income of the median U.S. household is still just under $52,000.

The government’s release last week of income and poverty data for 2013 brought renewed attention to the apparent stagnation of the American middle class — not just since the financial crisis hit six years ago this month, but for much of the decade that preceded the crash. The report showed that the economic recovery has yet to translate into higher incomes for the typical American family. After adjusting for inflation, U.S. median household income is still 8 percent lower than it was before the recession, 9 percent lower than at its peak in 1999, and essentially unchanged since the end of the Reagan administration.

“As a country,” New York magazine’s Annie Lowrey wrote Friday, “we peaked in the late 1990s.”

In 1970, 55 percent of U.S. income was earned by households in the middle 60 percent of the income distribution. More than half of households were in what Pew Research Center has labeled the “middle tier” of households (those earning between two-thirds and twice the median income). In 2013, both numbers had fallen to about 45 percent. In a 2012 report, Pew researchers called the 2000s “the lost decade of the middle class.”

The American Middle Class Hasn’t Gotten A Raise In 15 Years (Five Thirty-Eight) Note especially the "more educated" part. The "more diverse" part is interesting too, perhaps that explains the chart below. Divide and rule: 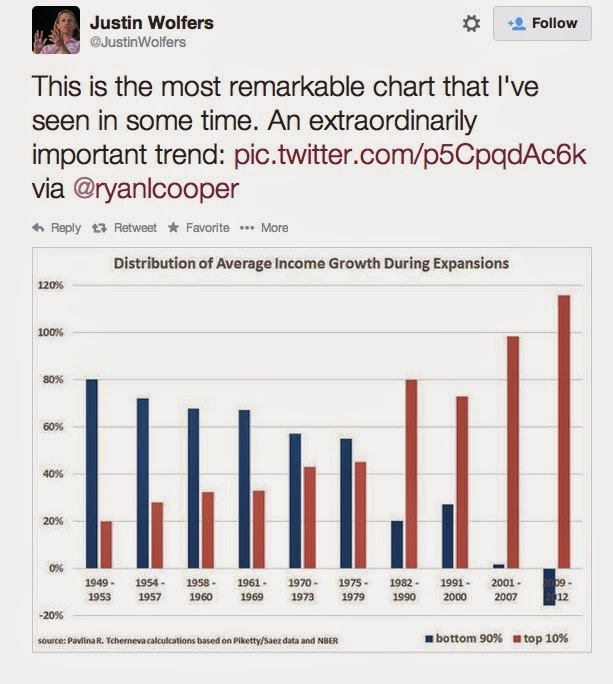 “The Most Remarkable Chart I’ve Seen in Some Time”: Rich Gain More Ground in Every US Expansion (Naked Capitalism) If the rich getting all the benefits of growth is a "natural law" of capitalism, then how do we explain 1949-1979?

The idea that Americans are "naturally accepting" of inequality is balderdash:


[Michael] Norton and [Sorapop] Kiatpongsan asked about 55,000 people around the globe, including 1,581 participants in the U.S., how much money they thought corporate CEOs made compared with unskilled factory workers. Then they asked how much more pay they thought CEOs should make. The median American guessed that executives out-earned factory workers roughly 30-to-1—exponentially lower than the highest actual estimate of 354-to-1. They believed the ideal ratio would be about 7-to-1.

This is the second high-profile paper in which Norton has argued that Americans have a strikingly European notion of economic fairness. In 2011, he published a study with Duke University professor Dan Ariely that asked Americans how they believed wealth should be split up through society. It included two experiments. In the first, participants were shown three unlabeled pie charts: one of a totally equal wealth distribution; one of Sweden’s distribution, which is highly egalitarian; and one of the U.S. distribution, which is wildly skewed toward the rich. Then, the subjects were told to pick where they would like to live, assuming they would be randomly assigned to a spot on the economic ladder. With their imaginary fate up to chance, 92 percent of Americans opted for Sweden’s pie chart over the United States.

In the second experiment, Ariely and Norton asked participants to guess how wealth was distributed in the United States, and then to write how it would be divvied up in an ideal would. [sic] Americans had little idea how concentrated wealth truly was. Subjects estimated that the top 20 percent of U.S. households owned about 59 percent of the country’s net worth, whereas in the real world, they owned about 84 percent of it. In their own private utopia, subjects said that the top quintile would claim just 32 percent of the wealth. In fact, the ideal looked strikingly like Sweden.

“People drastically underestimate the current disparities in wealth and income in their societies,” Norton told me in an email, “and their ideals are more equal than their estimates, which are already more equal than the actual levels. Maybe most importantly, people from all walks of life—Democrats and Republicans, rich and poor, all over the world—have a large degree of consensus in their ideals: Everyone’s ideals are more equal than the way they think things are.” Theoretically, Americans aren’t exceptional in their views about distribution at all—they have a sense of fairness similar to that of Germans, French, and Australians, and most Americans would be offended if they actually knew the degree of economic inequality that exists in this country.

It’s one thing to talk about fairness in the abstract; it’s another to agree on policies that would address it. Gallup, for instance, has consistently found that a solid majority of Americans believe wealth should be distributed more evenly. But fewer support the idea of imposing heavy taxes on the rich in order to do it...

Americans Have No Idea How Bad Inequality Really Is (Slate) That's by design, of course. 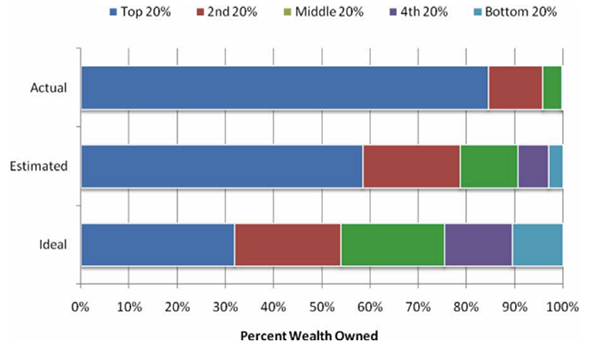 By the way, New York and DC have Ginis reflecting more inequality than what we find in Mexico or Nigeria.  Manhattan and Putnam County, Tennessee have Ginis almost as high as that of South Africa.

New York (Texas and Tennessee) fact of the day (Marginal Revolution)
Posted by escapefromwisconsin at 6:49 PM