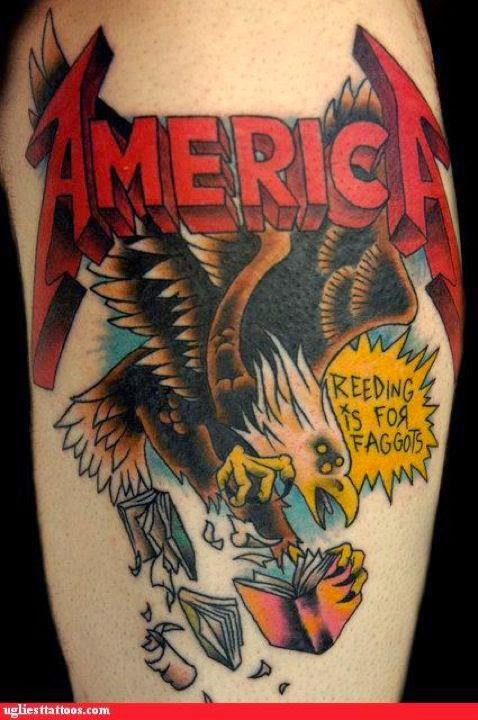 Charles Darwin’s signature discovery—first published 155 years ago and validated a million different ways since—long ago ceased to be a matter for serious debate in most of the world. But in the United States, reconciling science and religious belief remains oddly difficult. A national poll, conducted in March for the Associated Press, found that 42 per cent of Americans are “not too” or “not at all” confident that all life on Earth is the product of evolution. Similarly, 51 per cent of people expressed skepticism that the universe started with a “big bang” 13.8 billion years ago, and 36 per cent doubted the Earth has been around for 4.5 billion years.

The American public’s bias against established science doesn’t stop where the Bible leaves off, however. The same poll found that just 53 per cent of respondents were “extremely” or “very confident” that childhood vaccines are safe and effective. (Worldwide, the measles killed 120,000 people in 2012. In the United States, where a vaccine has been available since 1963, the last recorded measles death was in 2003.) When it comes to global warming, only 33 per cent expressed a high degree of confidence that it is “man made,” something the UN Intergovernmental Panel on Climate Change has declared is all but certain. (The good news, such as it was in the AP poll, was that 69 per cent actually believe in DNA, and 82 per cent now agree that smoking causes cancer.)

...Everywhere you look these days, America is in a rush to embrace the stupid. Hell-bent on a path that’s not just irrational, but often self-destructive. Common-sense solutions to pressing problems are eschewed in favour of bumper-sticker simplicities and blind faith.

In a country bedevilled by mass shootings—Aurora, Colo.; Fort Hood, Texas; Virginia Tech—efforts at gun control have given way to ever-laxer standards. Georgia recently passed a law allowing people to pack weapons in state and local buildings, airports, churches and bars. Florida is debating legislation that will waive all firearm restrictions during state emergencies like riots or hurricanes. (One opponent has moved to rename it “an Act Relating to the Zombie Apocalypse.”) And since the December 2012 massacre of 20 children and six staff at Sandy Hook Elementary School, in Newtown, Conn., 12 states have passed laws allowing guns to be carried in schools, and 20 more are considering such measures.

The cost of a simple appendectomy in the United States averages $33,000 and it’s not uncommon for such bills to top six figures. More than 15 per cent of the population has no health insurance whatsoever. Yet efforts to fill that gaping hole via the Affordable Health Care Act—a.k.a. Obamacare—remain distinctly unpopular. Nonsensical myths about the government’s “real” intentions have found so much traction that 30 per cent still believe that there will be official “death panels” to make decisions on end-of-life care.

Since 2001, the U.S. government has been engaged in an ever-widening program of spying on its own—and foreign—citizens, tapping phones, intercepting emails and texts, and monitoring social media to track the movements, activities and connections of millions. Still, many Americans seem less concerned with the massive violations of their privacy in the name of the War on Terror, than imposing Taliban-like standards on the lives of others. Last month, the school board in Meridian, Idaho voted to remove The Absolutely True Diary of a Part-Time Indian by Sherman Alexie from its Grade 10 supplemental reading list following parental complaints about its uncouth language and depictions of sex and drug use. When 17-year-old student Brady Kissel teamed up with staff from a local store to give away copies at a park as a protest, a concerned citizen called police. It was the evening of April 23, which was also World Book Night, an event dedicated to “spreading the love of reading.”

If ignorance is contagious, it’s high time to put the United States in quarantine.

America dumbs down (MacLeans) The U.S. is being overrun by a wave of anti-science, anti-intellectual thinking. Has the most powerful nation on Earth lost its mind? 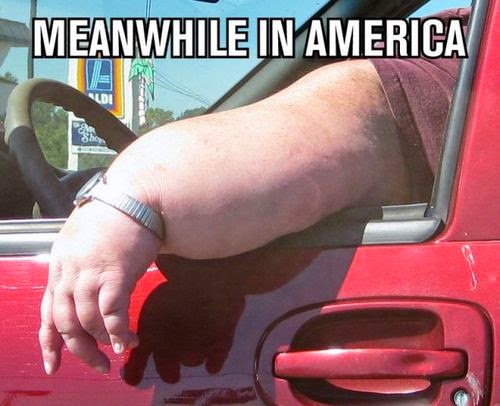 “Prius Repellent” is a perfect introduction to one of the Obama era’s great conservative subcultures: the men and women who “roll coal.” For as little as $500, anyone with a diesel truck and a dream can install a smoke stack and the equipment that lets a driver “trick the engine” into needing more fuel. The result is a burst of black smoke that doubles as a political or cultural statement—a protest against the EPA, a ritual shaming of hybrid “rice burners,” and a stellar source of truck memes.

The “Prius repellent” decal is easy to find on truck fan sites, as are memes of single or double stack trucks humiliating the drivers of smaller cars. There are videos of “hot babes” getting rolled on, and a mega-popular video (more than 3 million views) of an annoying Prius driver complaining about diesel. “She makes me want to do a John Force style burn out right in front of her,” observed one critic on DieselBurners.com.

The liberals seem a little surprised that conspicuous consumption—waste, even—could be a method of protest. They shouldn’t be. The motivation for political coal rolling is roughly the same one that gets people buying guns and ammo after mass shootings. The expectation, every time, is that liberals will capitalize on the shootings to ban guns, so it’s time to stock up.

Rolling Coal (Slate) Conservatives who show their annoyance with liberals, Obama, and the EPA by blowing black smoke from their trucks.

Could America break apart along religious lines, with devout Christians going one way and the rest of us going another? Think of the old “Jesusland” meme—the map of a North America divided between “Jesusland,” the states that backed George W. Bush in the 2004 presidential election, and “the United States of Canada,” consisting of the states that backed John Kerry and Canada that delighted liberals enraged by Bush’s re-election. At least some devout religious believers fear that as the ranks of the religiously unaffiliated grow, and as secular Americans insist on imposing their values on others, the faithful might face persecution. In 2000, Father John McCloskey, a conservative Catholic with a polarizing reputation, penned a controversial fictional take on how America might break apart. In it, a new religiously infused country, the Regional States of North America, secedes from the United States in the wake of a “short and relatively bloodless conflict” with their secularist oppressors.

But there are other threats to American national unity looming on the horizon. My admittedly unscientific sense is that we are living through a period in which Americans’ sense of solidarity or group cohesiveness is declining. Liberals tend to see this decline in solidarity as a symptom of income and wealth inequality. Conservatives blame it on a rising emphasis on ethnic identity over national identity, or the turn to moral relativism. I see it as a product of the economic and social isolation of huge chunks of our population.

While 14.9 percent of the U.S. population was below the poverty line in 2010, a quarter of all poor Americans lived in neighborhoods with poverty rates above 20 percent. These “poverty areas” are, as a general rule, disconnected from employment opportunities and high-quality educational options, and their inhabitants suffer from disproportionately high rates of violent crime and incarceration. The result is that the legitimacy of American institutions—the criminal justice system in particular, but other institutions as well—is on shaky ground in these parts of the country, as they seem to be rigged against those who live in them. There is no danger that America’s poor neighborhoods will secede from the United States. The real problem is that the rest of us have, in a cultural and spiritual sense, seceded from these neighborhoods.

One Nation, Divisible? (Slate) Is America in danger of fracturing into two countries, one secular, one religious?


Instead of helping to shrink the government, the gutting of congressional expertise and institutional capacity—what New America Foundation scholar and former congressional staffer Lorelei Kelly refers to as a “self-lobotomy”—has had two other effects, both of which have advanced conservative power, if not necessarily conservative ideals.

The first effect is an outsourcing of policy development. Much of the research, number crunching, and legislative wordsmithing that used to be done by Capitol Hill staffers working for the government is now being done by outside experts, many of them former Hill staffers, working for lobbying firms, think tanks, consultancies, trade associations, and PR outfits. This has strengthened the already-powerful hand of corporate interests in shaping legislation, and given conservative groups an added measure of influence over Congress, as the shutdown itself illustrates.

The second effect of the brain drain is a significant decline in Congress’s institutional ability to monitor and investigate a growing and ever-more-complex federal government. This decline has been going on quietly, behind the scenes, for so many years that hardly anyone even notices anymore. But like termites eating away at the joists, there’s a danger of catastrophic collapse unless regular inspections are done. While Congress continues to devote what limited investigative resources it has into the fished-out waters of the Internal Revenue Service and Benghazi “scandals” (thirteen Benghazi hearings in the House alone, with a new select committee launched in May), just in the last year we’ve witnessed two appalling government fiascoes that better congressional oversight might have avoided: the botched rollout of the health insurance exchanges and the uncontrolled expansion of the National Security Agency’s surveillance programs.

The organizational capacity that conservatives began attacking in 1995 had been painstakingly built up by their liberal and moderate predecessors over the previous quarter century. In the late 1960s, there was a general sense in Congress that the institution needed to upgrade its ability to understand and confront the challenges of a more technologically and socially complex country....The problem, however, is that conservatives as a rule don’t see this lack of expertise as a problem. Quite the contrary: they’ve orchestrated the brain drain precisely as a way to advance the conservative agenda. Why, when your aim is less government, would you want to add to government’s intellectual capacity?

The Big Lobotomy (Washington Monthly) How Republicans Made Congress Stupid

And see this classic from 2012: Independence Day: All of Our Institution Have Failed Us


Posted by escapefromwisconsin at 10:24 AM