Given that I once again recently broached the issue of genetically modified foods, it's nice to see some confirmation in an article that makes the same points better than I did:


Maintaining biodiversity is critical in every ecosystem. Acting together, all those plants and animals and their collective genes help each other survive. They also prevent the Earth from becoming completely dominated by cockroaches and rats.

Unfortunately, agriculture has a history of decimating biodiversity. Only certain plants and animals thrive under agricultural conditions, and selective breeding has made these plants and animals dumb and defenseless. So we keep them isolated, and spoon feed them everything they need to survive and reproduce. Modern agriculture produces ecological wastelands, where a single species is the only species present, for miles and miles and miles.

Genetic modification accelerates this process in a major way. Not only are farmers planting a single crop, but also with the advent of genetic modification, they are planting a single genetic line. The GM crops grow bigger, faster, with less chemical inputs. It just makes economic sense. But over time, this practice has led to a dramatic decrease in crop biodiversity. Meaning there are fewer types of species, and fewer genes within species, to adapt to changing climate. If the wrong pathogen comes along, every population of GM soy (which, in the US, constitutes over 90% of all soy) could be destroyed in a season. Since most of that soy goes into processed food and animal feed, you can kiss your hot pockets and cheap bacon goodbye.

Because agriculture doesn't happen in a vacuum, there can be unintended and complex effects of something that, on the surface, seems like a straightforward win. While Bt cotton does kill the target pest and reduce insecticide use, it also contributes to a rise in insect pests that were never a problem before. For example, mirid bugs munch a bunch of different plants, and are unaffected by the Bt toxin. They were never really a pest historically, because they were easily controlled by applications of insecticide. With the rise in Bt cotton, however, farmers stopped spraying poison, and mirid bugs built up to plague-level populations in cotton fields.

GM technology is designed to be elegant and efficient, targeting only those traits which we want to enhance. But ecology is far more complex than pest + poison = problem solved. The things we don't understand about how nature works are myriad, and oftentimes are incredibly basic.

You're Worrying About GMOs For the Wrong Reasons (io9) And to prove that point, see this: How monoculture farming changes biodiversity (BoingBoing). Here is a selection of species in a natural ecosystem:

And here is a cornfield: 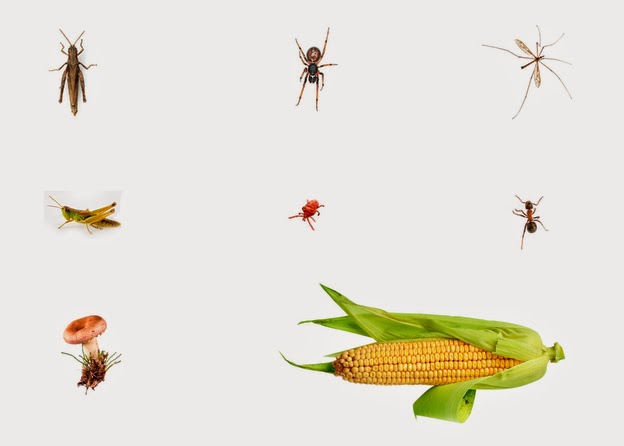 And nearby is this article that also deals with a theme we talked about recently:


Tens of thousands of years ago, humans were wild animals. Our ancestors roamed the land in search of food by day, and huddled together for safety by night. But then something changed. We domesticated ourselves, and this process didn't just change us profoundly — it changed a lot of other life forms around us, too.

7 Signs That Humans Are Domestic Animals (io9)
Posted by escapefromwisconsin at 9:23 PM