Utopia and Dystopia in California 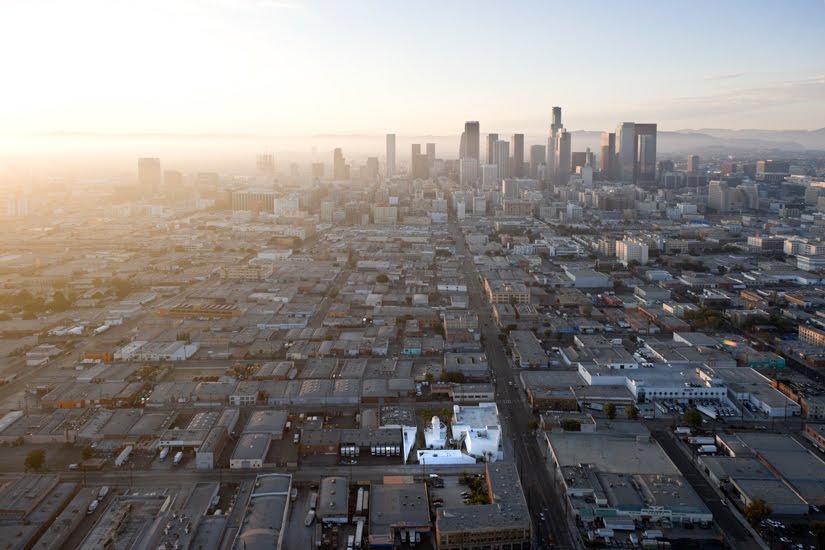 This article wonders why southern California, in particular Los Angeles, is so often depicted in the future as a divided, Balkanized hellish dystopia, while northern California is often portrayed as an Eco-conscious future silicon utopia:


This binary began in the 1940s with Earth Abides (1949), a book about a scientist starting over in Berkeley after a global pandemic, while in Aldous Huxley’s Ape and Essence (1948) Los Angeles slouches toward the apocalypse. The movies Planet of the Apes, The Terminator, Escape from L.A., Star Trek, and the books Ecotopia, The Fifth Sacred Thing (soon to be a feature film), and Snowcrash all play variations on this theme. Collapse and division is almost a foregone conclusion at this point—not just a future that might happen, but one many almost expect and therefore accept.

“Every American city boasts an official insignia and slogan. Some have municipal mascots, colors, songs, birds, trees, even rocks. But Los Angeles alone has adopted an official nightmare,” writes Mike Davis in Ecology of Fear. Hollywood has perpetuated this dystopian vision of its own home in the southland. From the Planet of the Apes series (1968–1973) on, future LA has been routinely trashed by nuclear, technological, and automotive catastrophe, police brutality, pollution, and crime. A Malthusian nightmare, the city is dark, filthy, and collapsing under the weight of its immigrant population, or barely held in check by totalitarian government and structural inequality—what Mike Davis called LA’s “spatial apartheid.”

Davis notes that this was so accepted as a likely trajectory for the city, that it was written into an LA redevelopment plan as a warning of what could happen were the plan not adopted. The plan, LA 2000: A City for the Future, calls this “the Blade Runner scenario: the fusion of individual cultures into a demotic polyglotism ominous with unresolved hostilities.”4  While it might be tempting to dismiss this as the fever dream of the bad old days, before hipster gentrification, smart growth, and downtown redevelopment, Southland Tales (2006), In Time (2011), and Elysium (2013) have done little to alter its imagery.

Northern California-as-utopia, on the other hand, is strongly linked to the countercultural movement of the sixties, with its guides for technologically advanced back-to-the-land living. One can read Ernest Callenbach’s influential novel Ecotopia (1975) as the possible future seeded by Whole Earth Catalog. Ecotopia is a fictional “field study” of a future Pacific Northwest society that has split from an apocalyptic United States and is governed according to ecological principles. While much technology has been abandoned, the Ecotopians have selectively retained public transit, electric cars, networked computers, and improved recycling (Callenbach was a longtime resident of Berkeley). Ecotopia‘s themes were later picked up and elaborated in the eco-feminist tales of Ursula K. Le Guin’s Always Coming Home (1985), a cultural anthropology of latter-day Napa Valley-ites who have returned to indigenous ways; Starhawk’s The Fifth Sacred Thing (1993) about a pagan, nonviolent San Francisco threatened by southern biological warfare; and Octavia Butler’s Parable books (1993, 1998) where refugees from the LA wasteland grow a new eco-religion, Earthseed, in the forests of Mendocino.

Postcards From the Future (Boom)

I wonder if it's because L.A. was built around the car? Or that San Francisco was traditionally for misfits and dreamers and had a distinctly off-the-map vibe about it. Certainly Silicon Valley and the counterculture movement had a role to play. Southern California seems to be seen as strident individualism based on the automobile and sprawl, while San Francisco, crowded on its small peninsula and crisscrossed by cable cars, is often seen as a land of hippie cooperatives. I wonder if the "new" Silicon Valley will change things as it increasingly becomes the symbol of a divided society between tech elites and the rest of us who are out of work thanks to automation. See this:

Heart of Blandness: A Walking Tour of Silicon Valley (Gawker):


We all know Silicon Valley, whether we want to or not. It's where the carefully cultivated children of privilege go to make immense amounts of money—not so much by selling goods and services to regular people, for a profit, but by selling companies to other Silicon Valley companies. It's a Ponzi scheme that nobody there really complains about, because everyone is pretty wealthy at the start. Failure in "the Valley" usually means a buyout, or exile as a consultant or freelancer, still providing a standard of living far beyond what 90 percent of Americans will ever enjoy.

Silicon Valley is also marketed as The Future of Humanity.

But as a human landscape, it's a crushingly boring sunny suburban slab of freeways, fast food, traffic, and long smoggy boulevards of faded retail sprawling out to endless housing developments of sand-colored stucco boxes. It's Phoenix with milder weather, Orlando minus the mosquitos.

Tech-loving travelers come from around the world to see Silicon Valley, but there's nothing to see—no Times Square, no French Quarter, just low-rise office parks and security guards circling the parking lots. Could anything be gained by walking from corporate landmark to corporate landmark? Maybe not, but two days of walking always beats two days of looking at a computer, even if I'd be walking from technology company to technology company.

A wasteland of public privilege and private squalor that would be at home in Jim Kunslter's writing. And here's a related article from Lloyd Alter reviewing Apples' new headquarters which reinforces this idea - "green" gizmo design for the elites and run-down unaffordable crime-ridden neighborhoods for the rest of us: Norman Foster explains Apple Headquarters, sort of (Treehugger)


Architecture used to be more complex than just a big idea of a big ring. People used to think about interactions, about flexibility, about expansion. In the sixties, Candilis Josic Woods worked on Berlin Free University, using Alison Smithson's principles of Mat-building into their campus, as described in the Architectural Review:

...they prioritise correspondences between departments rather than the traditional separation into independent faculties. This fosters informal pedagogy based on the spontaneous encounters between students, teachers and researchers in the wide corridors. It also caters for increasing numbers of students and changes in curricula which require flexible structures that can be enlarged. And, finally, it encourages the free-flowing exchange of knowledge in keeping with the mat-building’s inherent lack of hierarchy.

To bad Apple didn't get Alexander to design something based on A Pattern Language. See this, for example, from Naked Capitalism: Notes and Excursions on Christopher Alexanders “The Battle for the Life and Beauty of the Earth”


Here’s what a pattern language (116: “A word picture that describes the wholeness of a place”) reads like: The main headings of the pattern language evolved for the Eishin Higahino campus.

1. Global Character of Campus
1.1. An outer boundary surrounds campus.
1.2. Contained by this outer boundary there is a outer precinct. The outer precinct surrounds an inner precinct.
1.3. The inner precinct is a densely built area where School and College have their major buildings and activities.
1.4. The Outer Precinct is an area for relaxation, sport, outdoor activities and recreation.
1.5. As a whole the Campus is given its character by stone foundation walls, natural concrete walls, wood columns, white plaster surfaces, some green surfaces, wide overhanging roofs, dark roofs, stones and grass and pebbles on the ground.
2.1. The Entrance Street to the campus is a highly visible pedestrian Way. It begins at the Outer Boundary of the Campus, and ends at the Inner Precinct.
2.2. The Small Gate marks the outer end of the Entrance Street.
2.3. The Entrance Street is flanked with walls and trees. It is extremely quiet.
2.4. Where the Entrance Street meets the Inner Precinct, there is a second, much larger, Main Gate. It is three stories high.
2.5. Beyond the Main Gate, there is a Public Yard. Opening onto this Public Yard, there is an immense building, the great Hall. The Great Hall shapes and forms the Public Yard.
2.6. Etc. (2.6-2.14)
3. Buildings of Inner Precinct (3.1-3.12)
4. Streets of Inner Precinct (4.1-4.15)
5. Outer Precinct (5.1-5.25)
6. Features of Inner Precinct (6.1-6.22)
7. Special Outdoor Details (7.1-7.8)
8. Interior Building Character (8.1-8.9)

Pattern numbers mentioned in the text are preceded with a hash mark: “#.”

[Sidebar: Mehaffy, in an interesting series beginning here, makes much of the influence of Alexander's pattern language on software engineering (" If you have an iPhone, you may be surprised to know that you have Alexander’s technology in your pocket. The software that runs the apps is built on a pattern language programming system.") While it is true that Ward Cunningham invented the wiki for the express purpose of developing a pattern language for software engineering (see, e.g., PatternLanguage) I think Mehaffy's collapsing several layers of abstraction by calling Alexander's practice a technology instead of a craft or an art. Biological systems are, after all, not digital.]

Posted by escapefromwisconsin at 7:09 PM