The bottomless production of bullshit

A lot of people wonder why, since we seem to be at such a precipice of civilization with so many crises converging at once and perennially getting worse, we seem to be paralyzed; frozen in place, unable to come to any sort of collective agreement on what actions to take. We see decay and dissolution all around us, but all we do is bicker endlessly, with no real resolution. So many people seem so aggressively sure of themselves, no matter how ignorant they are. What’s going on?

There’s a common assumption that it’s just too complicated, or that are no answers. Or that getting to consensus is just too difficult. I’m not so sure. This is easily my favorite article from last week. It talks about a professor who is studying the cultural production of ignorance. This is one of the major reasons we’re heading into a new dark age, and I’m glad someone is at least attempting to make an academic study of it.:


Proctor, a professor of the history of science at Stanford, is one of the world's leading experts in agnotology, a neologism signifying the study of the cultural production of ignorance. It's a rich field, especially today when whole industries devote themselves to sowing public misinformation and doubt about their products and activities.

The tobacco industry was a pioneer at this. Its goal was to erode public acceptance of the scientifically proven links between smoking and disease: In the words of an internal 1969 memo legal opponents extracted from Brown & Williamson's files, "Doubt is our product." Big Tobacco's method should not be to debunk the evidence, the memo's author wrote, but to establish a "controversy."

When this sort of manipulation of information is done for profit, or to confound the development of beneficial public policy, it becomes a threat to health and to democratic society. Big Tobacco's program has been carefully studied by the sugar industry, which has become a major target of public health advocates.

It's also echoed by vaccination opponents, who continue to use a single dishonest and thoroughly discredited British paper to sow doubts about the safety of childhood immunizations, and by climate change deniers.

And all those fabricated Obamacare horror stories wholesaled by Republican and conservative opponents of the Affordable Care Act and their aiders and abetters in the right-wing press? Their purpose is to sow doubt about the entire project of healthcare reform; if the aim were to identify specific shortcomings of the act, they'd have to accompany every story with a proposal about how to fix it.

Proctor came to the study of agnotology through his study of the Nazi scientific establishment and subsequently of the tobacco industry's defensive campaign.

Early in his career, he told me, he asked an advisor if Nazi science was an appropriate topic of research. "Of course," he was told. "Nonsense is nonsense, but the history of nonsense is scholarship." As part of his scholarship, Proctor says he "watches Fox News all the time."

But showing people the ignorance of their ways changes their mind, right? Wrong!


In a recent study, a research team headed by Brendan Nyhan of Dartmouth College tried four methods to change the minds of parents who had decided not to immunize their children with the measles, mumps and rubella vaccine — a factual refutation of the vaccine-autism link; two different means of warning about the risks to children from contracting measles, mumps or rubella, including "a dramatic narrative about an infant who almost died of measles"; and horrific photos of children suffering from the diseases.

Some of the interventions persuaded the parents that the autism link was specious, but not a single one made the parents more willing to vaccinate their children. And some intensified opposition to the vaccine, a "backfire" effect.


Citing the results of a 2012 Gallup poll, Proctor asks, "If half the country thinks the Earth is 6,000 years old, how can you really develop an effective environmental policy? This sort of traditional or inertial ignorance bars us from being able to act responsibly on large social issues."

And, of course, the Tea Party movement provides a rich field for the study of ignorance:


The [tobacco] industry has succeeded in persuading the public and politicians that it has lost the smoking war, but that's a myth. Proctor says 40 million Americans still smoke and tobacco use is still rising in much of the world. Moreover, the industry's program isn't just about cigarettes, but part of "a larger agnotological project to promote free-market fundamentalism," he points out.

As Stanton A. Glantz of UC San Francisco documented last year, the tobacco industry was deeply involved in the evolution of the tea party movement, which promoted some of the industry's cherished aims, such as fighting tobacco taxes and anti-smoking laws.

"The Tea Party of the late 2000s has become the 'movement'" envisioned by a Reynolds executive 10 years earlier, Glantz concluded, "grounded in patriotic values of 'freedom' and 'choice' to change how people see the role of 'government' and 'big business' in their lives."


"The myth of the 'information society' is that we're drowning in knowledge," he says. "But it's easier to propagate ignorance."

How can you have a reasonable discussion with people who know things that just aren't so?

STUDY: Watching Only Fox News Makes You Less Informed Than Watching No News At All (Business Insider)

The Founding Fathers imagined a media designed to inform. But his work shows that it is just as likely to be used to confuse, inveigle and obfuscate (to borrow form the X-Files). In fact, it seems that ignorance is being produced even more aggressively than knowledge. Anyone who has seen Adam Curtis’ documentary The Century of the Self, or read Chomsky is already familiar with these ideas, but it’s only gotten more extreme and pronounced in the intervening years. Ignorance has become the most potent weapon in the arsenal of the political and corporate class, and they are deliberately dumbing down society to prevent any challenge to the status quo.

How much other nonsense gets peddled as “truth” on a daily basis – that we can grow infinitely on a finite planet. That we will never run out of oil. That we can go on consuming more forever. That innovation will save us. That there is a techno-fix for every problem. That the rich need to make their billions to be “motivated,” but minimum wages hurt growth. That automation and outsourcing does not cost jobs. That "free trade" is always good. That there is a terrorist under every rock. That we are being spied upon to keep us safe. That all the chemicals in our environment are nothing to worry about. The list is almost endless.

While the article focuses on the tobacco industry, anti-vaccine campaigners, and climate change deniers, I’m sure you can think of many, many more examples from almost any walk of life. FOX News does not just hold forth on science – it covers economic and social issues too, and dispenses just as much confusion and bullshit to the American public. The entire advertising, marketing, lobbying and public relations industries are dedicated to lying for a living. And, of course, let's not forget that the economics profession is an entire branch of pseudoscience peddling nonsense to defend the status quo (remember Kenneth Rogoff's magic debt to GDP ratio?). We have entire industries dedicated to nothing more than  lying and deceiving other people and bending the truth! How many people make their living doing this sort of work in modern society? Is it any wonder why we stand paralyzed while the iceberg approaches on the horizon.

What kind of a society devotes a huge amount of its resources just to lying to itself?

BONUS: From the steady roll of theories on what happened to Malaysian Arlines Flight 370, to Sarah Palin’s “death panels” panic, to Donald Trump’s birther theories, misinformation spreads like wildfire in the age of Facebook. Conspiracy Theories Running Rampant: How Misinformation Spreads on Facebook (Alternet) 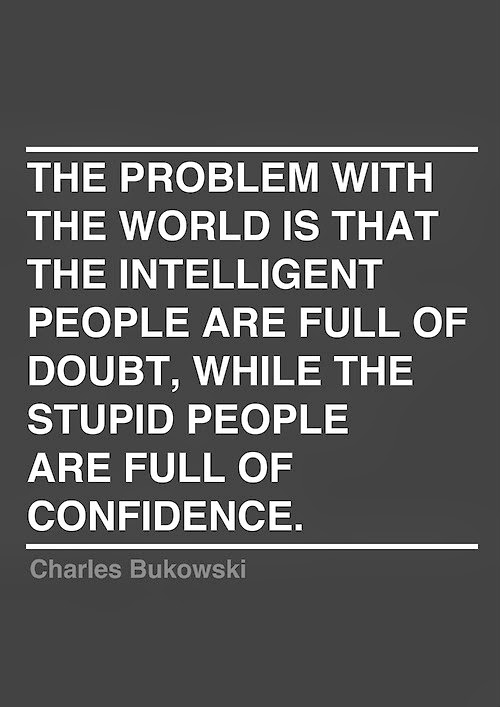 Posted by escapefromwisconsin at 7:42 PM