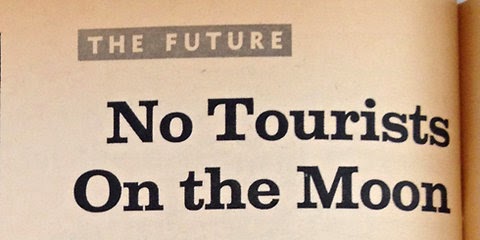 It’s difficult to make predictions, especially about the future.
-Attributed to Niels Bohr and Yogi Berra (and Mark Twain and Sam Goldwyn and...)

The only relevant test of the validity of a hypothesis is comparison of prediction with experience.
-Milton Friedman

There's no chance that the iPhone is going to get any significant market share.
-Steve Ballmer, USA Today, April 30, 2007.
(the last quote is from here http://en.wikiquote.org/wiki/Incorrect_predictions)

I was interviewed by KMO for the C-Realm podcast today, so hopefully I managed to say something intelligent. It was my first on-air interview, and of course there's always a bit of esprit d'escalier - stuff I thought of only after it was over.

One topic that came up is predictions for the future, specifically David Graeber's claim that many of the predictions for what we could technologically accomplish for 1960 came to pass, whereas many of the predictions from 1960 for the year 2000 and beyond have not happened, despite that fact that they are theoretically possible. The implication is that the managed Keynsianism that prevailed after the Second World War delivered a lot of the goods to the masses, but the Neoliberalism that has prevailed since the 1980's has instead put resources into accumulating wealth for the one percent and squelching any alternatives.

So, this seems like a good time to run these posts about predictions for the future, the right, the wrong, and the ugly:


The Ladies Home Journal of December 1900 ran a very brave list of predictions by one John Elfreth Watkins. Some are quite accurate, some wrong, and many are plain odd. Although grouped into 25 predictions, each one is a collection of not entirely related ideas. Some samples:

Prediction #6: Automobiles will be cheaper than horses are today. Farmers will own automobile hay-wagons, automobile truck-wagons, plows, harrows and hay-rakes. A one-pound motor in one of these vehicles will do the work of a pair of horses or more. Children will ride in automobile sleighs in winter. Automobiles will have been substituted for every horse vehicle now known. There will be, as already exist today, automobile hearses, automobile police patrols, automobile ambulances, automobile street sweepers. The horse in harness will be as scarce, if, indeed, not even scarcer, then as the yoked ox is today.

Prediction #16: There will be No C, X or Q in our every-day alphabet. They will be abandoned because unnecessary. Spelling by sound will have been adopted, first by the newspapers. English will be a language of condensed words expressing condensed ideas, and will be more extensively spoken than any other. Russian will rank second.

Prediction #21: Hot and Cold Air from Spigots. Hot or cold air will be turned on from spigots to regulate the temperature of a house as we now turn on hot or cold water from spigots to regulate the temperature of the bath. Central plants will supply this cool air and heat to city houses in the same way as now our gas or electricity is furnished. Rising early to build the furnace fire will be a task of the olden times. Homes will have no chimneys, because no smoke will be created within their walls.

Prediction #22: Store Purchases by Tube. Pneumatic tubes, instead of store wagons, will deliver packages and bundles. These tubes will collect, deliver and transport mail over certain distances, perhaps for hundreds of miles. They will at first connect with the private houses of the wealthy; then with all homes. Great business establishments will extend them to stations, similar to our branch post-offices of today, whence fast automobile vehicles will distribute purchases from house to house.

Prediction #23: Ready-cooked meals will be bought from establishments similar to our bakeries of today. They will purchase materials in tremendous wholesale quantities and sell the cooked foods at a price much lower than the cost of individual cooking. Food will be served hot or cold to private houses in pneumatic tubes or automobile wagons.

100-Year Old Predictions from 1900 (Long Now foundation). The original page seems to have gone dead. The pneumatic tubes will apparently have to wait for the Futurama of the year 3000: 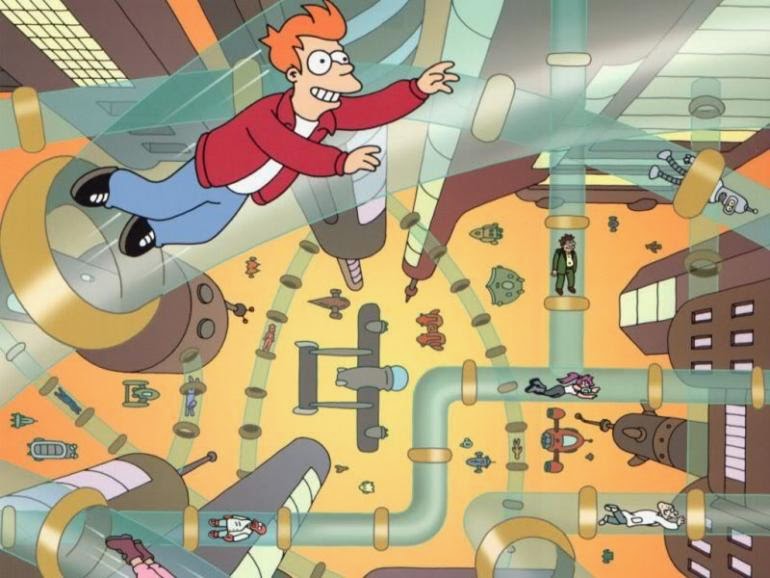 Here are some predictions from Nikola Tesla in 1935, via Paleofuture:


At present we suffer from the derangement of our civilization because we have not yet completely adjusted ourselves to the machine age. The solution of our problems does not lie in destroying but in mastering the machine.

Innumerable activities still performed by human hands today will be performed by automatons. At this very moment scientists working in the laboratories of American universities are attempting to create what has been described as a ” thinking machine.” I anticipated this development.

I actually constructed ” robots.” Today the robot is an accepted fact, but the principle has not been pushed far enough. In the twenty-first century the robot will take the place which slave labor occupied in ancient civilization. There is no reason at all why most of this should not come to pass in less than a century, freeing mankind to pursue its higher aspirations.


Long before the next century dawns, systematic reforestation and the scientific management of natural resources will have made an end of all devastating droughts, forest fires, and floods. The universal utilization of water power and its long-distance transmission will supply every household with cheap power and will dispense with the necessity of burning fuel. The struggle for existence being lessened, there should be development along ideal rather than material lines.

Nikola Tesla's Amazing Predictions for the 21st Century (Paleofuture) Of course, he also thought that departments of hygiene and selective breeding would eliminate disease. A look at our medical-industrial complex seems to indicate we're going in the opposite direction.

Here is a review of Paris in the Twentieth Century by Jules Verne. From the review:


On the most basic, surface level, Paris in the Twentieth Century is an astonishing book for its depiction of the modern age. Written in 1863, the story is set in the Paris of the 1960s. Paris in the Twentieth Century concerns a 16-year-old, Michel Dufrénoy, who graduates, with a devotion to literature and the classics, but finds they have been forgotten in a futuristic world where only technological writing is favored. The officially sanctioned creativity is government sponsorship of the arts, resulting in lowbrow theater for the masses, composed along the lines of the mass-produced collaborations of the 1930s Hollywood studio system. Dufrénoy's alienation is, in fact, inspired by Verne's own situation; at the time, to support his family, he was writing in the mornings before spending his days working at the Paris Stock Market, which he loathed.

Dufrénoy determines to be an artist, working on his own, but finds that his book of poetry is impossible to sell, and soon he is starving in the winter's cold, one of the few forces of nature that science has yet to overcome. In despair, he spends his last sous to buy violets for his beloved, but finds that she has disappeared from her apartment, evicted when her father lost his job as the university's last teacher of rhetoric. In a moving but excessively melodramatic climax, the heartbroken Dufrénoy, bereft of friends and loved ones, wanders through the frozen, mechanized, electrical wonders of Paris. The subjectivity becomes steadily more surreal as the dying artist, in a final paroxysm of despair, unconsciously circles an old cemetery. Dufrénoy encounters the modern tool of criminal execution--the electric chair (yet another scientific prediction, opposed to the guillotine of Verne's time)--before freezing to death.

Verne's prophecies of the world to come in Paris in the Twentieth Century, both in technical and cultural terms, are breathtaking in their extent and nearly unerring accuracy. Virtually every page is crowded with evidence of Verne's ability to forecast the science and life of the future, from feminism to the rise of illegitimate births, from email to burglar alarms, from the growth of suburbs to mass-produced higher education, including the dissolution of humanities departments. The accuracy of the prophecies cannot be overstated, and I would estimate that nearly 90% have come to pass. Perhaps Verne's most amusing error was in anticipating that the government would conduct itself in such a businesslike way as to show a dividend.

This article is from the New York Times Magazine from 1964 about predictions for the year 2000- Back to the (Far-Fetched) Future (New York Times). Here is what New York City was supposed to look like: 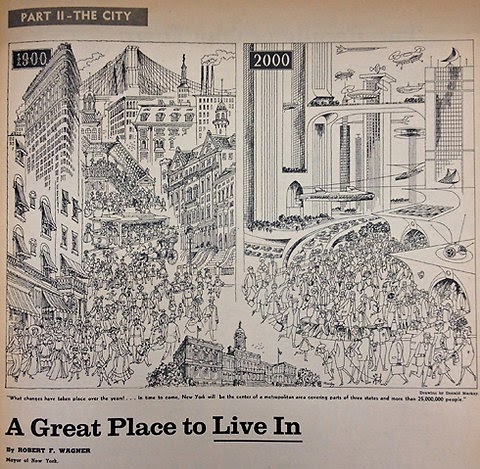 New York today seems to look more 19th century than 20th. And this passage struck me in particular:


"If economics and politics are not effective means toward producing happiness, what is the use of them? Next to mass suicide and mass starvation, mass unhappiness is the worst evil that could overtake the human race. And, alas, mass unhappiness seems now to be just around the corner."

"The present outlook for happiness is bad. Happiness had various sources. One source of it  us the mutual love that links a human being with his family and friends. Another source is religion. But a human being cannot be happy unless he is also happy in his work, because it is his work that gives him his significance and his value in society, and his membership in society, and therefore work, is one of the necessities of life, since man is a social creature. It looks, however, as if work is going to become a less and less important part of life. Happiness is being eliminated from work by mechanization. Mechanization is the price of affluence, and, so far as we can see ahead, mankind is going to opt for affluence--"

"'Doing it yourself' is a creative activity, and it is one which, unlike the arts of painting or writing poetry of composing music, is within the average human being's capacity. If the overmachinaized worker chooses, in the free nonearning hours of his waking life, to make this creative use of his time, he will become, outside the factory walls, a nonprofessional jack-of-all-trades, like his Neolithic and Paleolithic ancestors. And, if he regains the happiness of working for love, he will also regain an unimpeded access to the deeper sources of happiness in his family, his friends, his religion."

"How can one be truly happy without either being frustrated by suffering from too much mechanization or being kept poor and hungry by enjoying too little of it? If, by the year 2000, mankind has solved that problem, it will be able to look forward to the years 3000, 30,000 and 300,000 with fresh confidence."

And finally, here are some more accurate predictions that Isaac Asimov made in 1964 about the year 2014:


"Men will continue to withdraw from nature in order to create an environment that will suit them better."

"Kitchen units will be devised that will prepare 'automeals.'"

"Robots will neither be common nor very good in 2014, but they will be in existence."

"Much effort will be put into the designing of vehicles with 'robot-brains'—vehicles that can be set for particular destinations and that will then proceed there without interference by the slow reflexes of a human driver."

"Communications will become sight-sound and you will see as well as hear the person you telephone. The screen can be used not only to see the people you call but also for studying documents and photographs and reading passages from books."

"The world of A.D. 2014 will have few routine jobs that cannot be done better by some machine than by any human being. Mankind will therefore have become largely a race of machine tenders." 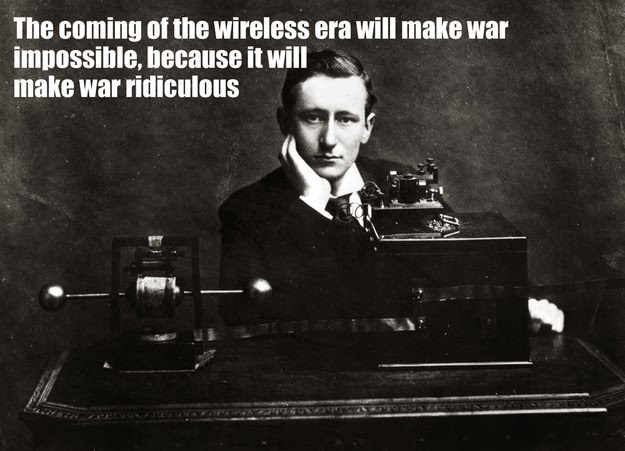 Posted by escapefromwisconsin at 5:11 PM