Where the money goes 2 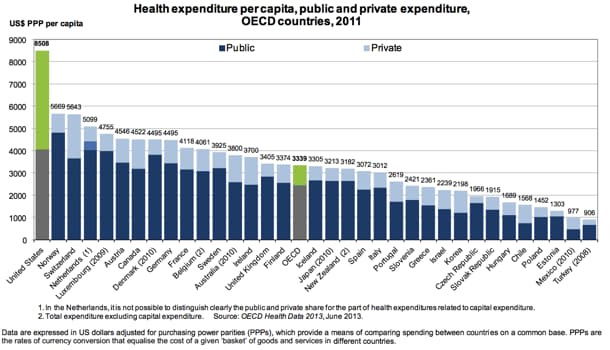 Some additional notes on yesterday's theme, here's Ezra Klein interviewing the author of the article on kludgeocracy:


Ezra Klein: Let's start by defining it: What makes a program or policy qualify as "a kludge"?

Steven Teles: A program or policy qualifies as a kludge if the fundamental policy mechanism is substantially more complicated than the problem it is trying to solve dictates. In general, it is a "kludge" because it builds upon, rather than supersedes, the policies that came before it. So in that sense, much of Obamacare, for example, is kludgey. That said, I don't use the term kludge to only mean policies that are complicated because they are layered upon preexisting policies. But that's a big part of it.

Ezra Klein: Reading your piece, one possible explanation it seemed was simply that American politics are more market-oriented than in other countries. To a large degree, it read like the difference between a kludge and a normal policy is the level of government policy. I.e., a public library or public school isn't a kludge. A tax credit to help the poor buy books from Amazon.com, or a voucher system, kind of is. Is that unfair?

Steven Teles: I think there's no question that America being more "market-oriented" is a part of the explanation. But we have to ask what that means. I argue that kludgeocracy is what you get when you combine a political culture in which market solutions have a certain prestige and in which the public simultaneously thinks there are a large number of areas that are legitimate subjects of public concern. If we were market-oriented and the public thought we should just let the market rip and see where the chips fell, that might not be a just society (I don't think it would be), but it wouldn't be a kludgeocracy. It's the attempt to preserve our market orientation and be a kind of welfare state that creates the problem.

Ezra Klein: What's interesting in your answer is that it doesn't leave much room for the general argument for market-provided services, which is that the market does it better. Is it your view that, in general, the added complexity of routing public services through private purveyors overwhelms whatever efficiency and innovation gains the private sector can provide?

Steven Teles: Right. Again, the issue isn't whether a service is better performed through the market or through the government. It's that in many cases, we haven't really made a choice of one or the other. We've tried to have both, and in having both, we lose a number of the advantages of either. In most cases, "privatization" does not really mean that a function has been given back to the market. It means that we have a highly subsidized, regulated, sometimes monopolized activity in which there is private ownership but a high degree of public control.

When you do that, you often lose a lot of what is good about markets, and in fact you create very strange kinds of private actors who are in fact totally dependent on government. And that often incentivizes them to be more oriented to lobbying and influencing government than to serving their customers. And that's where kludgeocracy is not just a complaint about "efficiency" but a complaint about the kind of governance that is generated by complexity.

Is America a ‘kludgeocracy’? (Washington Post) Here's the original article.

I think the the kludgeocracy allows us to pretend we are a "free market" society, so we can continue to go on believing our time-honored, cherished free market myths. If we actually did "let the market rip" as he says in the interview above, the resulting disaster would finally wake people up to the fact that an unregulated free market is just a recipe for total disaster and doesn't work outside of libertarian fantasies. As Michael Lind points out, no country on earth has actually tried that approach, at least intentionally.

Try eliminating the mortgage interest deduction, or the tax break for employer-sponsored coverage, and you'll find that out real fast. But Americans tend to distinguish between benefits they feel they've earned -- Social Security, say -- and benefits they consider giveaways. It's not a very useful distinction, but it's a convenient, and thus a powerful, one. We have a vast welfare state for the middle and upper classes, but the politics of it are entirely different.

For instance: Among the more mind-blowing facts about the health-care system is that the tax break we give to employer-provided insurance dwarfs the cost of the entire Affordable Care Act -- and, if you want to take the concept a bit further, this means those of us who don't get insurance from our employers are being forced, even mandated, to pay for those of us who are. But this break is largely uncontroversial in American politics, while subsidies to help people who can't afford health insurance are extremely controversial.

The submerged state in one graph (Washington Post)
Posted by escapefromwisconsin at 7:17 PM