The Death of the Car

In fact, what we're seeing is counterintuitive from what some Peak Oil commentators have said in the past. Rather than moving back to big cities and walkable communities because they can't afford gasoline and insurance, downwardly-mobile people are being pushed ever farther out into the sprawling suburbs because this is the only place where rents and housing prices are low enough for them to live with their minimal incomes!  Books like Average is Over have predicted Mexican-style shantytowns with nonexistent municipal services developing along the fringes of America's sun-belt cities for the teeming masses of Americans who will end up impoverished by automation and outsourcing.

So even though the price of gas has gone up, the price of housing has gone up even more, making it economically impossible to live in walkable communities, so people are forced to live far from their job and commute in, even with the high gas prices. That is, if they even have a job - a lot of young people are probably trapped in their parents suburban chalets bought in the fifties and sixties at the margins.

Meanwhile, walkable vibrant urban communities have essentially become winner's circles for elite  Americans because, as Kunstler and others point out, they're just better to live in! As cities become gentrified, the suburbs become soulless ghettos for America's new poor, especially the white poor ("slumburbia"). So, perversely, the very people who can easily afford higher gas prices don't need to because they have shorter commutes and can walk everywhere. This is reinforced by America's extreme spatial balkanization along income lines - the rich live by the rich, and the poor have to live with the poor, and more and more that seems to be the suburbs. It's yet another way everything in America is geared to comfort the comfortable and afflict the afflicted.

Nevertheless, the trend is clear - driving in the developed world is going down, and fracking doesn't seem to be saving it. I've noted before that in Europe, bicycle sales have surpassed car sales for the past couple of years.

Has the Developed World Hit “Peak Car Use”? (Naked Capitalism) 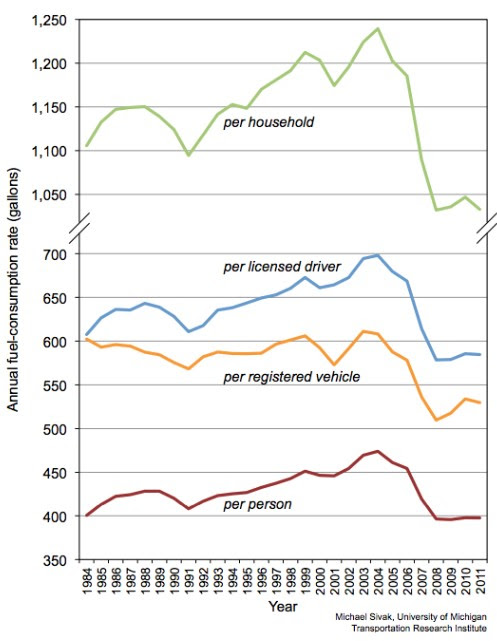 It's not the economy, stupid; young people really are turning their backs on cars (Treehugger)


Young people have turned to transit because they can’t afford vehicle ownership. Yes, the proportion of young drivers has dropped in the last decade. But HLDI [Highway Loss Data Institute] data suggests that drop has coincided with the economic downturn – which has not only hammered youth employment, but also has had an impact on parents who might otherwise help their kids take the wheel. As HLDI points out, “There was an inverse relationship between the growing unemployment spread and the falling ratio of teen drivers to prime-age drivers.” As unemployment rises, youth driving sinks.

Meanwhile, in the "developing" world:

Beijing 'plans congestion charge' to ease traffic woes (BBC) and Sao Paulo: A city with 180km traffic jams (BBC) and 10 monster traffic jams from around the world (BBC)
Posted by escapefromwisconsin at 11:06 AM