As an addendum to the last post about hunter-gathers versus farming, while a discussion of the two differing modes of life is interesting and useful, the reality is that there are many ways of living that humans have taken advantage of between the two. Many societies were horticultural societies where plants were cultivated along with a hunting-and-gathering lifestyle. Here in Wisconsin, Native Americans cultivated corn, beans, squash, and wild rice, and gathered berries and nuts. On the same podcast I included the Christopher Ryan quote from, Joe Rogan mentioned hunting here in Wisconsin and how white-tailed deer are everywhere. And that's today - just think what it must have been like in pre-Columbian times with no industrialization and a fraction of the population! Other societies fished, or kept some captive animals. But the key thing is, look at the big picture. Remember Welsh's quote: it's important to remember that life doesn't have to be shit.

So, in the interest of completeness, I thought I'd include this good post about horticultural traditions that was on Resilience.org recently which covers early Roman, Chinese, and Inca methods of cultivation:


Long before the rise of annual grain based industrial agriculture, and the dismantling of our food and cultural traditions, humans lived in ways much closer to the earth.  In some places hunting and gathering remained a viable option (even up to the present day), and in other places this relationship with the earth manifested itself through horticulture and various forms of animal husbandry.  In many places it was a mix of these two ways of procuring food that shaped and defined a culture and/or a region.

For untold millennia (until relatively recently), humans had been able to provide for their basic needs through a combination of these two actions:  Hunting/Fishing/Shepherding/Husbanding and the cultivation/gathering of plants for all of their dietary needs.  These ways of life are not mutually exclusive, but rather a complementary set of skills and traditions that have formed the long and diverse history of humans, the food we eat, and how we inhabit, impact, and transform our landscapes.

The transition from hunter/gatherers to industrial agricultural farmers did not happen overnight.  It has been a long drawn out story that has seen countless empires and kingdoms rise and fall, climate and weather patterns change, landscapes transformed, and cultural practices (some good, and some bad) that have led up to the present day.  The part of this story that really interests me, and what this essay is going to explore, are some of the horticultural practices that came between the gulf of the hunting and gathering lifestyle and the transition to the industrial agricultural paradigm, and how the ultimate survival of the human species rests in reconnecting with these horticultural traditions. 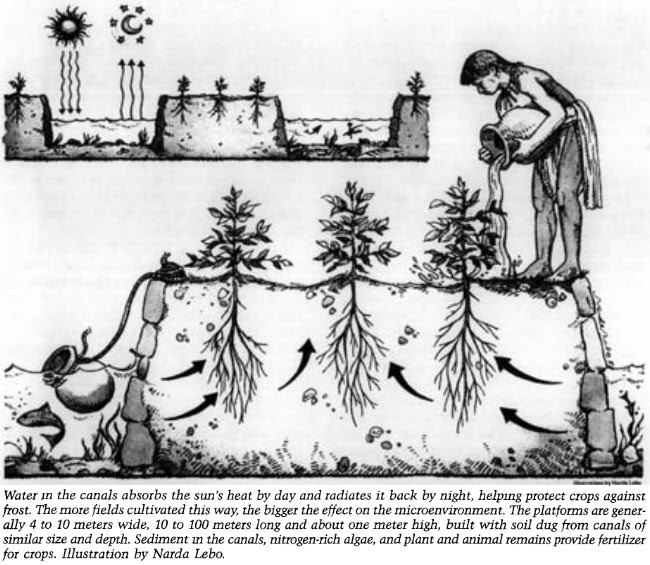 "At the time of the Spanish conquest, the Incas cultivated almost as many species of plants as the farmers of all Asia or Europe. On mountainsides up to four kilometers high along the spine of a whole continent and in climates varying from tropical to polar, they grew a wealth of roots, grains, legumes, vegetables, fruits, and nuts. Without money, iron, wheels, or work animals for plowing, the Indians terraced and irrigated and produced abundant food for fifteen million or more people—roughly as many as inhabit the highlands today.

Throughout the vast Inca Empire, sprawling from southern Colombia to central Chile—an area as great as that governed by Rome at its zenith—storehouses overflowed with grains and dried tubers. Because of the Inca's productive agriculture and remarkable public organization, it was usual to have 3–7 years' supply of food in storage.

Posted by escapefromwisconsin at 7:23 PM