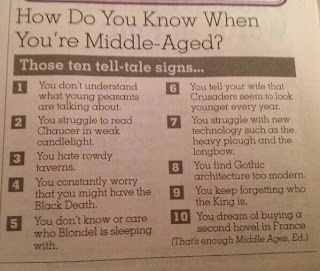 I must have tapped into the zeitgeist. More references to feudalism, this time concerning the internet. Tally-ho!

The Rise of Internet Feudalism (The Atlantic via Disinfo)


The Internet has emboldened traditional power. On the corporate side, power is consolidating, a result of two current trends in computing. First, the rise of cloud computing means that we no longer have control of our data. Our e-mail, photos, calendars, address books, messages, and documents are on servers belonging to Google, Apple, Microsoft, Facebook, and so on. And second, we are increasingly accessing our data using devices that we have much less control over: iPhones, iPads, Android phones, Kindles, ChromeBooks, and so on. Unlike traditional operating systems, those devices are controlled much more tightly by the vendors, who limit what software can run, what they can do, how they’re updated, and so on. Even Windows 8 and Apple’s Mountain Lion operating system are heading in the direction of more vendor control.

I have previously characterized this model of computing as “feudal.” Users pledge their allegiance to more powerful companies who, in turn, promise to protect them from both sysadmin duties and security threats. It’s a metaphor that’s rich in history and in fiction, and a model that’s increasingly permeating computing today.

Medieval feudalism was a hierarchical political system, with obligations in both directions. Lords offered protection, and vassals offered service. The lord-peasant relationship was similar, with a much greater power differential. It was a response to a dangerous world.

Feudal security consolidates power in the hands of the few. Internet companies, like lords before them, act in their own self-interest. They use their relationship with us to increase their profits, sometimes at our expense. They act arbitrarily. They make mistakes. They’re deliberately—and incidentally—changing social norms. Medieval feudalism gave the lords vast powers over the landless peasants; we’re seeing the same thing on the Internet.

In many cases, the interests of corporate and government powers are aligning. Both corporations and governments benefit from ubiquitous surveillance, and the NSA is using Google, Facebook, Verizon, and others to get access to data it couldn’t otherwise. The entertainment industry is looking to governments to enforce its antiquated business models. Commercial security equipment from companies like BlueCoat and Sophos is being used by oppressive governments to surveil and censor their citizens. The same facial recognition technology that Disney uses in its theme parks can also identify protesters in China and Occupy Wall Street activists in New York. Think of it as a public/private surveillance partnership.

The truth is that technology magnifies power in general, but rates of adoption are different. The unorganized, the distributed, the marginal, the dissidents, the powerless, the criminal: They can make use of new technologies very quickly. And when those groups discovered the Internet, suddenly they had power. But later, when the already-powerful big institutions finally figured out how to harness the Internet, they had more power to magnify. That’s the difference: The distributed were more nimble and were faster to make use of their new power, while the institutional were slower but were able to use their power more effectively. So while the Syrian dissidents used Facebook to organize, the Syrian government used Facebook to identify dissidents to arrest.

Technology magnifies power in general. I can't emphasize that enough. There's something to throw back at techno-utopian fantasies.

And I should mention this article from Brad DeLong, specifically this paragraph, a concise summary of the Right-wing "model" of economic growth:


I am increasingly convinced that the Republicans of the Prairies and the South just do not understand how to play the game of economic growth or, indeed, of capitalism in the 21st century. Betting your economic growth strategy on low wages, a lack of infrastructure, low taxes, union-busting, natural resources, and the direction of farm subsidies, defense spending, and NASA to your districts carries you only so far, after all.

As the article notes, the states rejecting help to expand health insurance are making themselves 2% poorer. Why would they do this? And why would voters support it? This model of low wages, threadbare public services, expensive or non-existent health care, crumbling infrastructure, and gated compounds sounds more like the model for a banana republic, not the world's largest economy.

But the first commenter to the article nails it:


In regard to economic growth...If you see yourself as a local Feudal Lord, what does it matter if your villagers are poor? True, you might not be able to compete with the far richer court nobles in NYC or SF, but in your realm, and the realms around you, you are fabulously wealthy and powerful; what price do you put on Droit du seigneur ?

As I pointed out in The coming zero-sum game, quoting this post from Matt Yglesias:


...the assumption that economic growth will continue undergirds conventional wisdom about economic policy in a really profound way—namely it's the key reason to limit political interest in redistribution of economic resources...But if growth is over, that whole logic collapses, and politics really should just consist of a bitter zero-sum scramble over the distribution of a fixed pool of resources.

As I have speculated before, the right/wing Tea Party oligarchy and their allies are prefectly aware that growth is over. Their behavior makes no logical sense otherwise. Throughout the twentieth century, even conservative/right-leaning parties knew that you needed a broad middle class for a consumer mass market, that you needed an educated and healthy workforce, that you needed enough jobs for people to maintain a decent tax base, that you needed a good infrastructure to run a business and transport goods, regulations to maintain a decent standard of living, and a social safety net of some sort to keep people complacent (because it was cheaper than jail). They may have differed in their beliefs and methods of how to accomplish this, but they believed in it in concept.

But if growth is over, and we are returning to the Malthusian world of times past, it makes sense to grab as much as you can and set yourself up as a feudal overlord. If you know there are not going to be enough jobs in the future, ever, it doesn't make sense to educate the masses or make sure they are healthy, because you don't need them for anything. They are merely useless eaters (or takers in the parlance of today). The benefits for the masses in the nineteenth-twentieth centuries accrued to the citizens of nation-states because the overlords needed vast amounts of labor in their factories to make their fortunes, and sick, poor, homeless and illiterate people are less effective workers. Now those workers are no longer needed.

If growth is over, improving most peoples' living standards is impossible, so might as well return to the state where most people are "peasants" - poor, hungry, sick and starving. If you no longer have the desire or the resources to assure a decent standard of living to the masses, it makes sense to construct a vast surveillance state and classify anyone opposed as a "terrorist" with essentially no rights whatsoever. How else can we justify spending vast amounts of money on a prison-industrial complex while at the same time slashing spending for schools?

Really, what the Tea Party and their allies are advocating is a pre-industrial medieval model of society where hereditary owner-lords wield all decision-making power as a private prerogative, and a mass of suffering, hungry, landless peasants toil ceaselessly to claw what little they can from an impersonal market and drop dead as soon as possible after pumping out the next generation of serfs. It is difficult to see any other justification for their actions.

Resources are being redistributed all right - in fact were' seeing the biggest redistribution of resources since the rise of industrialism - away from the democratic states whose people built and paid for them with their toil and treasure and into "higher, tighter and righter hands." And the peasants themselves appear to be biggest supporters of this process.

Why make the pie any bigger when you have nearly all of it already?
Posted by escapefromwisconsin at 10:29 AM

Email ThisBlogThis!Share to TwitterShare to FacebookShare to Pinterest
Labels: Neofeudalism