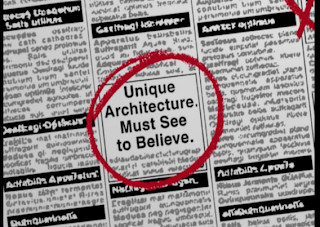 Wiggly and squiggly, jagged and jutting, the iconic architectural “marvels” of today make all the original midcentury stuff look like a bunch country cottages. From Dubai to Denver, the urban skylines of the world are now dotted with thrusting science-fiction fantasies, many of which resemble scaled-up versions of the various window dressing awards—lopsided obelisks and chrome projectiles—that I have received over the intervening years. Examples include the Burj Khalifa tower in Dubai, that lemon wedgie thingy in Barcelona, Frank Gehry's melting Spruce Street tower in New York, and Zaha Hadid's Heydar Aliyev fantasia in Azerbaijan.

Call me perverse, but I find this brave new world to be extremely entertaining. I particularly enjoy watching people—they appear bleak, terrified, and thoroughly upstaged—schlepping in and out of these kooky edifices. I also enjoy the inevitable nicknames. In the U.K. the populace takes revenge on these grandiose creations by giving them ruthlessly quotidian monikers: the Gherkin, the Razor. The Walkie-Talkie. It’s a Madonna-becomes-Madge moment.

Though the buildings themselves are very entertaining, the same cannot be said of the architects. Grumpy and inflexible, they seem like a really annoying bunch of Fountainhead-reading egomaniacal lunatics. Many are wildly budget-oblivious and refuse to design anything unless it has a wobbly facade or a diminishing floor plate. Rectangular buildings—such as the modernist masterpieces of the Chicago skyline that I happen to be looking at right now because I am visiting the Windy City—are a thing of the past. Regarding those diminishing floor plates: This is clearly a fuck you to the real-estate developer who, thanks to the pointiness of the building, is saddled with unrentable high-altitude microunits that are whipped by high-velocity winds.

The poster child for this my-way-or-the-highway sci-fi architecture must surely be that daring Calatrava dude whose budget-busting shenanigans, spine-fracturing glass walkways, leaky roofs, and myriad lawsuits were detailed in a recent New York Times article. He is currently scrambling to finish part of the new World Trade Center, a luxe $3.44 billion train station known as the Oculus, a fantastical object that will, if it is ever completed, resemble a massive malevolent-looking outer-space porcupine. My psychotherapist’s office is right around the corner. I look forward to indulging in a little Tati-watching after my sessions.


Architects Are the New Comedians. What makes today’s signature skyscrapers such a laugh riot? (Slate) The emperor has no clothes! 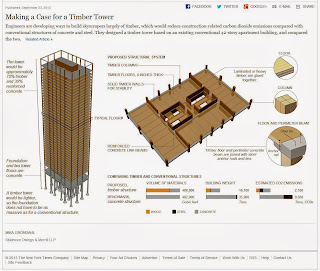 Towers of Steel? Look Again (New York Times) Interesting stuff on timber high-rise construction. A lot of older buildings here in the city are made with old-growth heavy timber (with brick outer bearing walls), which has more fibers per square inch than newer timber, in addition to being attractive and surprisingly fire-resistant (nature has developed charring as a natural fire-retardant system). Sadly, old-growth trees are mostly gone, meaning those that remain are not economical to harvest and use.

A 1,476-foot tower equipped with its very own cloaking device (io9) "The South Korean government has granted approval to begin construction on what will be the world's first "invisible" tower. Called the Infinity Tower, it will be equipped with an LED facade system and optical cameras to give it a reflective skin — and a striking translucent appearance." [design by high-tech gimmick]

These Are The Most Extreme Buildings Ever (io9)

Across China, Skyscrapers Brush the Heavens  (The New York Times) Prefab is all the rage these days. Let's make buildings as automated and bland as everything else around us, shall we? And by all means, let's live in human anthills. For a totally different take:

Twigitecture: Building Human Nests (New York Times) "Chee Pearlman, a design consultant and curator, ventured that nests are 'probably the purest antidote to the heavy steel-and-concrete building footprints that, city by mega-city, are overtaking the globe.'"

Romanesque on the Plains: The Look of Sioux Falls (The Atlantic) Believe it or not, ordinary towns in the Heartland used to look unique and have a sense of place.

New Skyscraper Unexpectedly Generates A Solar Beam That Can Fry Cars (io9) Another high-tech architecture fail for the all-glass building type that got quite a lot of attention a while back (including from the BBC). A similar thing happened on a building in Las Vegas.

Hamptons: McMansions Herald a Return of Excess (The Big Picture). Meanwhile, tent cities are springing up like daisies in flyover country.

The Young Savior of American Architecture Burying Frank Gehry (Esquire) I like what he says, but I just can't square it with what he designs. The Seattle Public Library is wrapped entirely in an opaque arbitrary glass form in a cloudy, cool climate, seems to have no functional justification, can't perform well from an energy standpoint, and looks like the ultimate in menacing "Darth Vader helmet" architecture.

Why the ‘Barcelona’ Pavilion is a modernist classic (BBC) A bit of history about where Modernism came from. Interesting how much influence this 'temporary' building had.

The Modern Seaweed House by Vandkunsten and Realdania Byg (Dezeen) Another innovative use of building materials and place-making.

In recent years, the most interesting projects seem to be the ones that are contenders for the Aga Khan Award for Architecture. A nice international variety of old and new as well. It's nice that it takes into account the social meaning of architecture rather than just trendy aesthetics.

Decorated Mud Houses in Burkina Faso (No Tech Magazine) "Burkina Faso is a poor country, even by West African standards, and possibly the poorest in the world. But they are culturally rich, and decorating the walls of their buildings is an important part of their cultural legacy in this area of the country. Wall decorating is always a community project done by the women and it’s a very ancient practice that dates from the sixteenth century AD."

Posted by escapefromwisconsin at 7:31 PM

Email ThisBlogThis!Share to TwitterShare to FacebookShare to Pinterest
Labels: architecture