Progress and the Great Divergence 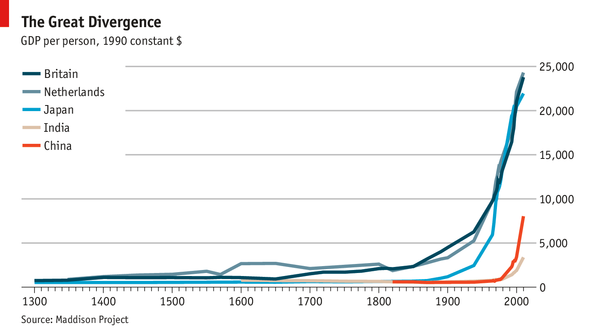 This week, we've been considering the notion of progress and when these changes took place. We've discovered that it has been a relatively recent phenomenon - only in the nineteenth century did human living standards and longevity take a turn for the better, after millennia of stagnation or even decline since the rise of settled agriculture. The date that has been argued in the previous posts is 1870 - and indeed that is when we see average height and life expectancy start to rise to those of prehistoric times, along with far more manufactured goods.

Economic historians call this "The Great Divergence." Not only was it recent, but it was geographically isolated too. Why it took place in Western Europe first and not elsewhere has been a hotly debated topic. This article from The Economist summarizes some of the thinking:


A FEW centuries ago it would have been difficult to tell Europe apart from the rest of the world—in economic terms, at least. Indeed, half a millenium ago Europe might justly have been considered a laggard. The three inventions which, in the words of Karl Marx, “ushered in bourgeois society” were not invented in Europe. Gunpowder, the compass and the printing press were probably all invented in China.

But by the 19th century, things were rather different. Western Europe and parts of North America had become fabulously wealthy. Almost everywhere else was horribly poor. Economic historians refer to this as the “Great Divergence”.

The timing of the divergence is hotly debated. Some think that it really took off around 1800. Others reckon that it was earlier. Such debates will probably never be resolved with much precision, given the unreliability of the evidence. But the question of what caused the divergence might be of more interest.

Cultural factors are a popular explanation for European ascendancy. Max Weber, a German sociologist, thought he had the question nailed. In his book “The Protestant Ethic and the Spirit of Capitalism”, published in 1905, Weber argued that religious factors were crucial for spurring European economic growth. Weber's view centred on Calvinism—a branch of Protestantism—and argued that it encouraged Europeans to be thrifty, rational, and concerned with material gain. Such values did not exist outside Europe where, according to Weber, material wealth was not revered and entrepreneurship was seen as subversive.

Similar arguments have emerged since Weber. Thomas Sowell, at Stanford University, points to the British as responsible for no less than the invention of freedom. In Mr Sowell’s view, the British were a shining light of economic development, which other countries gradually learnt to imitate. (Fascinating new research explores a similar theory: that learning best practices from others is essential to growth and becomes harder the greater the cultural distance from economic leaders.)

But other historians reject the idea that European cultural superiority caused the Great Divergence. Rather, it was their plundering and pillage of foreign lands which was responsible. According to James Blaut, an American historian, the year 1492—when Christopher Columbus landed in America and set off centuries of European colonialism—“represents the breakpoint between two fundamentally different evolutionary epochs”. From 1492 onwards, Europe pulled in raw materials, currency and labour, and deliberately held back the rest of the world.

But others have looked to non-cultural explanations. Jared Diamond, at the University of California, Los Angeles, suggests that environmental factors played a crucial role in the European take-off. Mr Diamond argues that Europe was uniquely endowed with domesticable plants and animals. Its population was also more immune to diseases. These factors led to higher productivity and, crucially, higher population density. The upshot? The development of institutions such as cities, bureaucracies and literate classes, which contributed to economic growth. Economist Gregory Clark presents an explanation similar to this but with a macabre twist; as disease picked off Britain's poorer residents, he argues, the population became steadily more competent and productive, leading eventually to the self-sustaining growth of the Industrial Revolution.)

Some are aghast at Mr Diamond’s work. They accuse him of “environmental determinism”—the idea that climatic conditions are fully responsible for human behaviour. But Joel Mokyr, at Northwestern University, quotes Mr Diamond’s work approvingly. Environmental differences are important, but they do not explain everything.

Mr Mokyr suggests that many different factors, working together, allowed Europe to take off. The development of "open science" in the 16th century helped with the spread of economically useful ideas. Another theory suggests that the Glorious Revolution in Britain of the 1680s, which reduced the power of the monarch, was a crucial stepping-stone in the country’s economic development. After the revolution, people became less worried that their profits would be summarily seized by the Crown, as they had been in the past. And so they became keener to work hard. This theory is at the heart of the book "Why Nations Fail", by economist Daron Acemoglu and professor of government James Robinson.

The Western affection for capitalism, as well as colonialism, certainly contributed too. Mr Mokyr argues that the causes of the Great Divergence are “overdetermined”. Many different factors intertwined to create European dominance—and no single factor would have been enough on its own. This conclusion might seem like a typical academic fudge. But the point is that the Great Divergence was not simply caused by European culture. Rather, it emerged because a business-friendly, open and innovative economy was created—mostly by accident.

What was the Great Divergence? (The Economist) See also the reading list at the end.

I'm not sure Diamond is being used adequately here. His main question was why sedentary, hierarchical, agricultural civilizations took hold so much earlier in some parts of the world than others, not why the Industrial Revolution happened where it did. Even by Diamond's arguments in Guns, Germs and Steel, the Industrial Revolution may just as well happened in Egypt, Mesopotamia, Rome, China, India or Japan.

Not mentioned is the advantage Great Britain had with easily accessible coal. As Britain became deforested, coal began to be increasingly used as a fuel. Not by choice - coal was historically an undesirable fuel because of it's noxious qualities and it's impurities (you could not smelt pig iron from it before Darby, for example). Charcoal was much preferred, but trees were in short supply. So was labor - populations were recovering from the Black Death, but labor could flee to the New World to get a better deal than in crowded England.

Britain's coal seems were easily accessible (it is a relatively small island, after all), but located on the coasts, meaning the mines were subject to flooding. Thus, there was an impetus to use coal to pump water out of the deep mines, and this was the basis for the "Miner's Friend" of Thomas Savery, the precursor to he Newcomen steam engine, which was the precursor to James Watt's steam engine. Of course, once you has the coal, you needed to transport it to where it was needed, which was the impetus for the locomotive. China and Japan's coal was not as accessible, and there was less immediate need to put it to use, even though China mined more coal than Britain as far back as the 1100's. They also has no shortage of labor, quite the opposite. The Middle East is rich in petroleum, of course, but without the necessary chain of discoveries, no one knew what to do with it aside from some minor uses (naphtha, for example).

In any case, the missing element from all these accounts from economic historians seems to be energy and fossil fuel access. This to me is a major flaw in their analysis.
Posted by escapefromwisconsin at 12:46 PM