Yesterday I had the opportunity to take a road trip of sorts up to Appleton to take a look at a project. It was one of those picture-perfect Midwestern sunny summer days, and we took the scenic route up to the north of Lake Winnebago. During the course of our journey we saw abandoned stone and wood water mills on river dams, Amish children baling hay and selling strawberries (I bought some – fantastic), old Victorian houses with wraparound porches for hot summer nights, unused bandhsells, and picturesque small town main streets so beloved of James Howard Kunstler. We stopped for ice cream at a tiny white-picket fenced stand, with some cows lying in a pasture in the rear. On the way back I stopped at the cheese factory to buy some locally produced artisanal cheese and meats. I wish I had some photos.

Anyway, I think that combined with my current viewing of the second season of Game of Thrones, my recent trip to Europe, and my musings on Neofeudalism, to get me to thinking about what a “medieval” North America would be like. What will all this look like in a thousand years? After all, who would suspect that a small fishing village built on a series of islands by refugees fleeing the barbarian invasions during the decaying Roman Empire would eventually become Venice? 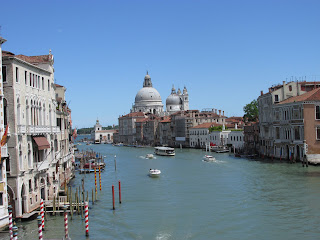 After all, in some ways, places in North America are probably more similar to Europe of a thousand years ago than Europe is today. In that time, Europe was much less built up, much more sparse and open, and most of Europe’s peasant population relocated over here in the nineteenth century bringing a lot of their culture with them (including, unfortunately, the violence, superstition and religiosity). Imagine the regions of America as their own individual fiefdoms. The sheer size of the continent makes it a fascinating prospect.

I was also reminded of these links on Ran’s site:

It looks like the author of the latter site kind of got bored with it, which is too bad. It seems like a good start. I’d like to run with it, but I don’t want to copy the author’s work. If anybody knows him, maybe they could ask him if he wants somebody to take it over.

It’s a fascinating thought. I wonder if a fictional future medieval North America might make a good setting for a Game of Thrones like series set in a future north America, say, 1000 years from now. What would that scenario look like?

North America’s environment has been largely ruined in the last great push for hydrocarbons. Coastal cities are flooded, aquifers are depleted, topsoil has eroded, groundwater has been polluted from hydraulic fracturing, moutaintops have been removed for coal, and certain regions are off limits due to radioactive waste. At the same time, animal species are returning, road systems have fallen into disrepair, dams have broken and forests are expanding across the continent. Buffalo once again roam the prairie. Shifting climate patterns have altered the population distribution of North America. Yet it is a different North America, transformed by invasive species, GMO crops, and even ill-advised species resuscitation.

Washington is a shrunken city of decrepit monuments on a fetid swamp where the National Mall has been converted to cow pasture, the Washington Monument having been carted off long ago by China. New York is the nation's most populous city and cultural capital, a virtual nation unto itself, even with much of lower Manhattan permanently flooded. Regional capitals have supplanted the national one. San Francisco is once again a busy port with a bustling Chinatown. Los Angles is the capital of the West and a center of entertainment. New Orleans is a modern-Day Venice built to escape rising seas. Much of Detroit has returned to prairie. Las Vegas and Phoenix are abandoned. Portland is a town of market faires and music. Squatters live in homesteads among the ruins of the Rust Belt where packs of wild dogs roam the streets at night. Cities in the heartland are self-sufficient manors ruled by hereditary "job creator" overlords.

States have broken apart in favor of bioregions. Whites are a minority, especially in cities. Cities are outposts of culture, technology, and relative safety in a rural wilderness dominated by nomadic motorcycle gangs, narco cartels, meth labs, and roaming bands of brigands and scavengers. They are ruled by major families and/or corporations who form trading alliances with distant regions, field private armies, and adopt sports emblems as heraldic banners. Universities are like monasteries in a sea of ignorance, preserving what science they can, including the remaining computers and measuring instruments in a culture overwhelmed by fear and superstition.

Hemp and cannabis are major cash crops. Goods move by river. People move by flywheel-powered trains between cities and bicycles and bicycle taxis within them. Technology is still there, of course, but mostly irrelevant to people’s lives. Automobiles run on corn ethanol and biodiesel. Barons communicate with one another in their concrete citadels by means of radio. Knights ride motorcycles, wield guns made from plumbing pipes and practice mixed martial arts. Waterwheels generate electricity in remote areas. Factories and forges harness the sun. Cottage industries return. Skyscrapers, suburbs and landfills become above-ground mines for raw materials. Back roads have retruned to gravel, and what’s left of interstate highways are traversed on foot or horseback, because vehicles would break an axle.

Amish and Mennonite numbers increase, with Amish farms and craftsmen prospering in the heartland, and the Navajo once again raise sheep in the desert. The Deep South is a benighted feudal theocracy, complete with segregation and brutal lynchings. Texas is a libertarian every-man-for himself frontier of rich and poor awash in guns. The Southwest is a hybrid Mexican/American culture with Spanglish as its lingua franca.  Nevada is a Mormon theocracy where ploygamy is legal.

Around campfires people tell stories of how man walked on the moon, of Luke Skywalker and Darth Vader, of the triad of Kirk, Spock and McCoy (Intuition, logic and command consciousness). The folk songs of Bob Dylan, Neil Young, and Paul Simon are sung. The Burning Man ritual is celebrated every year across the high desert, its origin unknown. Religions such as Singularitarianism ('The Singularity is Near'), Scientology, Entheogenic religions ('Find the Others'), Cosmism ('We are star stuff'), atheism, cults, and cafeteria religions vie for people's hearts and minds.

It’s all fascinating speculation, of course, but it seems rife with possibilities. I had been mulling for a long time the idea of doing a peak oil story set in the far future based around the crew of a ship that transports goods. The beauty of this is that since the ship can go anywhere, you are not wedded to one locale. Thus you can show a range of responses based on local cultures and resources.

Any good science fiction speculation about the future is actually about the present. I tend to overthink what a “realistic” future scenario might look like, but I really just need to pick and choose what would make a compelling story.

In truth, I’ve got a large number of ideas for fiction books, and I was considering putting a post out to my readership asking what they would most like to read. Do those ideas sound compelling? Does the ship one or the medieval one sound more appealing?

The DIY Weapons of the Syrian Civil War

The Most Unusual Metro in the World

Welcome to Sarajevo's Designs for Survival


Many of the objects have a disarming charm. There's a vacuum flask made from a glass bottle coated with insulating foam and enclosed in a cardboard box wrapped in bright orange packing tape marked "fragile". It's about as un-Thermos-like as you can get, which is why discovering its use as one is such a delight. One of the most inventive devices here is a torch crafted out of a bicycle lamp and a miniature dynamo. To power it, you crank a handle from a coffee or meat grinder. It's a positively steampunk contraption, a Victorian projection of how a portable electric light might work.

Let's avoid the temptation to present this as an authentic design culture of Sarajevo, which for hundreds of years was one of Europe's most diverse and tolerant cities. It is far from that. Instead, it is the design culture of an aberration, a temporary phenomenon within a historical blip. We are used to praising this kind of ad hoc ingenuity – often rather patronisingly – when we see it in Africa or India, but this was Europe, less than 20 years ago, and these people were not poor. Their money was simply no use to them, just as a Mercedes in a garage is no good without petrol to run it. The rote responses we apply to the developing world don't work in this instance.

We think of design as one of the planes on which civilisation charts its course, measuring ourselves by our technological achievements and our talent for pleasing forms. But when civilisation breaks down, we resort to a cunning DIY culture with the resultant Mad Max mechanics and none of the Hollywood styling. Naive though some of these objects appear, their worth was weighed in how effective they were. In that sense, they represent a rare thing: a non-consumerist design culture. That's not to say there was not a market for it – one of those pot-stoves would set you back seven packs of cigarettes if you couldn't make your own – but this was an alternative economy that had nothing to do with novelty, desire or retail therapy. It was about staying alive.

Note: The photo at the top is of Holy Hill, a popular pilgrimage site situated at the top of the tallest hill in the Kettle Moraine state forest and close to the Ice Age trail. Just right for the medieval future. If you’re ever in Wisconsin, I advise a visit, especially in the fall when the leaves change color and you can pick up some locally grown apples and cider.

This was my first foray into fiction on this site: Blue Eyes.
Posted by escapefromwisconsin at 12:49 PM