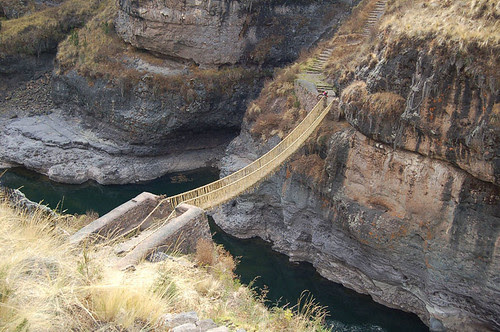 Here’s a nice little snippet about appropriate technology in South America: Biodegradable bridges that could span longer than stone bridges used in Europe:


The Incas never invented the wheel, never figured out the arch, and never discovered iron. But they were masters of fiber. They built ships out of fiber (you can still find reed boats sailing on Lake Titicaca). They made armor out of fiber (pound for pound, it was stronger than the armor worn by the Conquistadors). Their greatest weapon, the sling, was woven from fibers, and was powerful enough to split a steel sword. They even communicated in fiber, developing a language of knotted strings known as quipo, which has yet to be decoded. So when it came to solving a problem like how to get people and goods across the steep gorges of the Andes, it was only natural that they would think about the problem in terms of fiber.

Five centuries ago, the Andes were strung with suspension bridges. By some estimates there were as many as 200 of them, braided from nothing more than twisted mountain grass and other vegetation, with cables sometimes as thick as a human torso. Three hundred years before Europe saw its first suspension bridge, the Incas were spanning longer distances and deeper gorges than anything that the best European engineers, working with stone, were capable of.

Here in the desolate, 2-mile-high Andean altiplano, little else grows besides ichu, a tall needly grass that covers the mountainsides, feeds the llamas, and is the raw material from which the keshwa chaca is constructed. The walkway of the keshwa chaca consists of four parallel ropes with a mat of small twigs laid across, anchored at both ends by a platform of larger rocks. Two other thick ropes acts as armrails, and are connected to the walkway with a cobweb of smaller cord. Despite its seemingly fragile materials, modern load testing has found that in peak condition, the keshwa chaca can support the weight of 56 people spread our evenly across its length.

It reminds me of how the Mayans used all sorts of things like jade and obsidian where Europeans used steel. Why? Well, because that’s what they had and it worked.


…the tradition of rebuilding the keshwa chaca each year has not abated. Each June, it is renewed in an elaborate three-day ceremony. Each household from the four surrounding towns, is responsible for bringing 90 feet of braided grass cord. Construction takes place under the supervision of the all important bridge keeper, or chacacamayoc. The old bridge is then cut down and thrown into the river. Because it has to be willfully, ritually regenerated each year, the keshwa chaca’s ownership passes from generation to generation as a bridge not only across space, but also time.

The Last Incan Suspension Bridge Is Made Entirely of Grass and Woven by Hand (Slate)
Posted by escapefromwisconsin at 6:04 PM