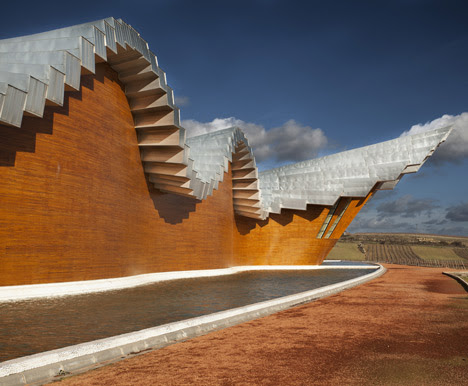 This story is about a building by Santiago Calatrava plagued by the bane of modern architecture: leaky roofs:


He is the genius behind some of the world's most spectacular bridges, museums and airports, but Spanish architect Santiago Calatrava cannot plug a leaking roof, according to a client who is demanding he contribute to the €2m (£1.7m) needed to pay someone else to do the job. A dozen years after Calatrava built the spectacular Ysios winery in the rainy Alava region of northern Spain, the building's dramatic, undulating roof continues to let in the damp.

Now Domecq, the owner of the winery, has said it is fed up with the botched attempts of Calatrava's original builders at fixing the roof and wants money from them so that it can bring in fresh architects and engineers to design a new one.

An expert's report that accompanies a writ lodged at a court in Vitoria claims that the roof, made of wood and aluminium, has never managed to keep the rain out. The firm pledges to maintain the original outline designed by Calatrava – an architect and engineer sometimes compared with fellow Spaniard Antoni Gaudí – but says that the leaks are damaging its image.

The row comes on the top of complaints in Calatrava's home city of Valencia about the slowly wrinkling, ceramic outer skin of the city's emblematic Palau de Les Arts, where tiles have started to shake loose.

If you read the Guardian article, you’ll see that a number of Calatrava’s buildings have been plagued by various technical and usability issues and cost overruns. It’s sort of a pity, because I really like the aesthetics of his work. Here in Milwaukee, he’s something of a celebrity for designing our art museum, which is simply called by most people ‘The Calatrava.” Ironically, the art museum features a movable roof structure, but problems so far have been pretty minimal.

Once again we see the sad record of modern architecture in keeping buildings dry. Creating some kind of new type of roof, often using high-tech materials, seems to be a calling card of modernist architecture, despite usable roof shapes and techniques dating back thousands of years. Isn’t this reinventing the wheel? In fact, thatch, a very old natural building material, seems to be undergoing something of a renaissance: 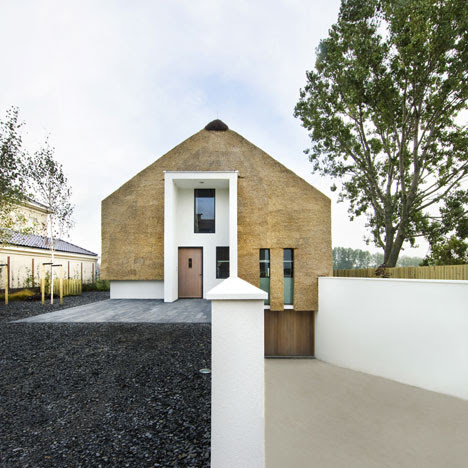 Living on the Edge by Arjen Reas (Dezeen)

There are a lot of innovative ways to build with natural maerials, if only we can past the gizmo-centric greenwashing and tree-infested skyscrapers.
Posted by escapefromwisconsin at 12:41 PM