Is The New Economy Off The Books? 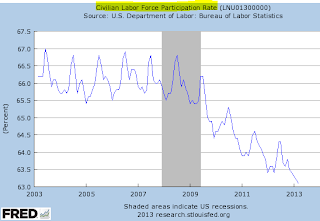 What happens to workers who drop out of the labor force? (Sober Look)

1. Older workers retiring earlier.
2. Young workers going back to school.
3. Getting paid under the table.
4. Disability.


Whether it's the spouse, the underground economy or the federal government providing the income, there is "life" after the unemployment checks stop coming. Meanwhile, the "official" labor participation rate keeps falling.


The increasing importance of the gray economy isn’t only a reaction to the downturn: studies suggest that the sector has been growing steadily over the years. In 1992, the I.R.S. estimated that the government was losing $80 billion a year in income-tax revenue. Its estimate for 2006 was $385 billion—almost five times as much (and still an underestimate, according to Feige’s numbers). The U.S. is certainly a long way from, say, Greece, where tax evasion is a national sport and the shadow economy accounts for twenty-seven per cent of G.D.P. But the forces pushing people to work off the books are powerful. Feige points to the growing distrust of government as one important factor. The desire to avoid licensing regulations, which force people to jump through elaborate hoops just to get a job, is another. Most important, perhaps, are changes in the way we work. As Baumohl put it, “For businesses, the calculus of hiring has fundamentally changed.” Companies have got used to bringing people on as needed and then dropping them when the job is over, and they save on benefits and payroll taxes by treating even full-time employees as independent contractors. Casual employment often becomes under-the-table work; the arrangement has become a way of life in the construction industry. In a recent California survey of three hundred thousand contractors, two-thirds said they had no direct employees, meaning that they did not need to pay workers’-compensation insurance or payroll taxes. In other words, for lots of people off-the-books work is the only job available.

Sudhir Venkatesh, a sociologist at Columbia and the author of a study of the underground economy, thinks that many workers, particularly younger ones, have become comfortable with casual work arrangements. “We have seen the rise of a new generation of people who are much more used to doing things in a freelance way,” he said. “That makes them more amenable to unregulated work. And they seem less concerned about security, which they equate with rigidity.” The growing importance of services in the economy is also crucial. Tutors, nannies, yoga teachers, housecleaners, and the like are often paid in cash, which is hard for the I.R.S. to track. In a 2006 study, the economist Catherine Haskins found that between eighty and ninety-seven per cent of nannies were paid under the table.

Here's the story of one labor-force dropout: an interview with the Mr. Money Moustache guy. Click through to the interview. I link to the Slate article because there should be some interesting comments. I'll just note that I've followed nearly every proscription he has - paid down debt, no cable TV, walk or bike, don't buy useless junk, etc. I am nowhere near retiring, however. For one, I was heavily in debt for college, and when I graduated I made $25,000 with a lengthy commute on top of it, not $77,000 with no debt. And I have not invested my money, as for most years I had no disposable income, and I need access to money in case of job loss. So I think his circumstances are highly unusual. Still, there are some good tips here.
Posted by escapefromwisconsin at 12:22 PM