For the past two decades, demographers have generally agreed that global population growth will continue to inch steadily higher in the coming century, raising concerns about everything from pollution to housing to the world's water supply.

But a new study out of Spain suggests those estimates may be way off—we're talking several billion people off—and that the earth's population could instead peak as soon as 2050. Applying a mathematical model to global population trends, these researchers believe that there will be fewer people living on earth in 2100 than there are today.

In 2011, the United Nations population division predicted a global population of 10.1 billion by 2100, an increase of nearly 50 percent from the earth's current population of 7 billion. In the U.N. models, only the low-fertility curve showed the possibility for population decline in the 21st century.

But scientists at the Autonomous University of Madrid and CEU-San Pablo University say their estimates, developed by using techniques from high-level physics to analyze UN population data between 1950 and the present, match that low-fertility curve. That path, indicated with boxes in the graph below, shows global population peaking in 2050 slightly above eight billion, and then falling back to 6.2 billion by the end of the century, the same as the total world population back in 2000.

Could the Earth's Population Peak in 2050? (The Atlantic)

If true, that's a bit of a relief as population will track closer to Peak Oil without a major dieoff. In fact, according to the article, the highest rate of population growth was the 1980's:


This research, published in the journal Simulation in February, indicates that the decline in the birth rate (prompted by declining fertility rates) will catch up to the decline in mortality rates faster than the top-line UN forecast, which would make the 1980s the time at which the world population was growing the fastest.

Gee, what else happened in 1980? Oh, yes, Peak Oil per capita. Coincidence? 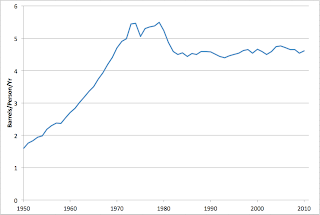 Posted by escapefromwisconsin at 8:09 PM