Is The Eastern Mediterranean Collapsing?

Has anyone noticed that the Eastern Mediterranean is showing literally all the signs of collapse that bloggers often claim will happen to the United States?

This was brought to mind by this post from Sober Look: Egypt's Descent Into Chaos:


Reuters: - After two years of political turmoil, Egypt is struggling with an economic crisis and a high budget deficit. Foreign currency reserves are critically low, limiting its ability to import wheat and fuel.

An International Monetary Fund (IMF) delegation resumed long delayed talks with the government on Wednesday on a loan, which would throw Egypt a financial lifeline and potentially unlock a much larger amount in foreign aid and investment.

"The economic situation has become worrisome and quick measures are needed to restore (economic) activity," Planning Minister Ashraf al-Araby said, according to MENA.

As the government runs out of foreign reserves, diesel shortages are becoming acute.

FT: - Egypt imports up to 70 per cent of its diesel, which it uses to fuel cars, farm equipment and power plants. In addition, it subsidises diesel to the tune of at least $1.5bn a month, draining the country’s already perilously low hard currency reserves. A spate of shortages in recent weeks has raised questions about Egypt’s ability to keep the lights on, feed its people and prop up its moribund economy in the coming months.

Sounds like a collapse to me. And we've been watching the goings-on in Greece for several years, which I've talked about before. After several years of hardship, it seems that things are not getting any better - mass unemployment, violent protests, mass emigration, suicides, barter currencies, back-to-the-land movements, food shortages, fascist parties ascendant, hospitals short on medicine, people chopping down trees for heat - all the things the Peak Oil community said would happen in the event of a meltdown.

And now Cyprus is experiencing all the signs of a banking collapse. I have not been keeping up with the particulars, but it looks like they are confiscating peoples' savings and the ATMs are shut so people cannot get their money out of the banks. Again, all things the Peak Oil community has predicted.

And of course Syria is in a massive state of chaos after a two-year civil war. See this post from The Atlantic: Syria in Ruins. See also: Syria's Landmarks Erased by War (Al-Jazeera). Does that not look like a collapse by any definition?

And Iraq still lies in ruins and chaos as well. The former Iraqi blogger (and now refugee) Riverbend has written a poignant post describing the continuing chaos ten years after the invasion:


We learned that while life is not fair, death is even less fair- it takes the good people. Even in death you can be unlucky. Lucky ones die a ‘normal’ death… A familiar death of cancer, or a heart-attack, or stroke. Unlucky ones have to be collected in bits and pieces. Their families trying to bury what can be salvaged and scraped off of streets that have seen so much blood, it is a wonder they are not red.

We learned that you can be floating on a sea of oil, but your people can be destitute. Your city can be an open sewer; your women and children can be eating out of trash dumps and begging for money in foreign lands.

We learned that it’s not that difficult to make billions disappear.

Greece, Cyprus, Egypt, Syria, Iraq. And other counties in the region are not faring much better - Libya still seems to be on its knees. Jordan and Lebanon are being flooded with Syrian refugees. And Israel is a perennial war zone.

It looks like the entire Eastern Mediterranean is collapsing.

Is it caused by Peak Oil and/or climate change? Some experts seem to think so:


Is it simply a coincidence that the Syrian revolution was sparked at the same time the country was still reeling from its worst drought ever recorded? Unsurprisingly, a new study on The Arab Spring and Climate Change [PDF] finds evidence it is not.

The Toronto Star has a good overview:

One million refugees, more than 70,000 dead, scores injured, billions of dollars lost in destroyed homes, businesses and livelihoods: the net total, to date, of the conflict that started quietly in March 2011.
...
From 2006 to 2011, up to 60 per cent of Syria experienced the worst drought ever recorded; it turned the country’s verdant farmland into dust. “The worst long-term drought and most severe set of crop failures since agricultural civilizations began in the Fertile Crescent many millennia ago,” Femia and Werrell wrote.

We know how sheltered we are in his country. But these are things to keep in mind when people say that a collapse is "coming," or that "we'll muddle through," or that it's "no big deal." It's already happening and the results are not pretty. How could anyone not interpret what's happening in the Levant and Greece as a collapse that has been ongoing for years right under our noses?

I find a bitter irony in the fact this is the very part of the world where civilization itself first arose (and later independently in India, China, and the New World). The Fertile Crescent gave rise to the first city-states, farming, irrigation and writing; Greece's city-states to the idea of the West that spread to Rome and Northern Europe; and Israel the religious ideas that dominate the world. Could it be the place where modern industrial civilization meets its ultimate fate? 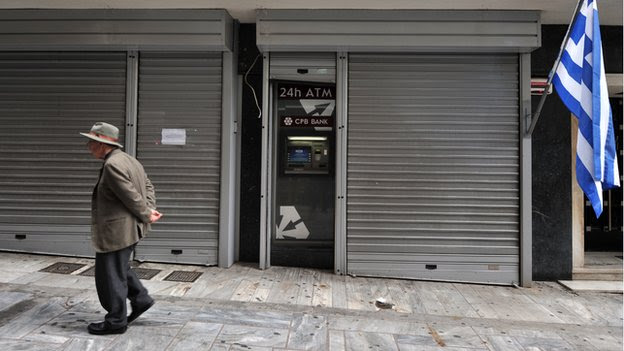 Also see: In Pictures: Syrian refugees' most important things. Note how many of them have to deal with family. It really gets my goat when comfortable middle-class Americans talk about stockpiling food or gold or guns to pretect them from hungry hoards. They don't know how good they have it. Talk to these people about what a collapse really looks like, and how little preserving your so-called "wealth" really matters.
Posted by escapefromwisconsin at 7:56 PM