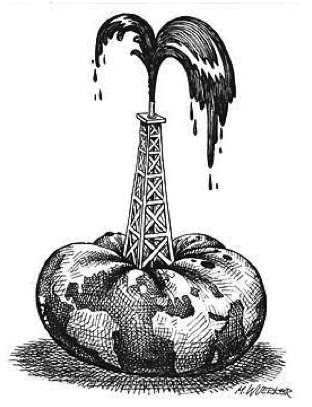 
There are certainly huge amounts of oil locked up in shale formations worldwide. In the United States alone, the Bakken and Eagle Ford shales contain up to 700 billion barrels, and the Green River shale under Colorado, Wyoming, and Utah has a whopping 2 trillion barrels. However, only a tiny fraction of this total is recoverable. For Bakken (in Montana and North Dakota) and Eagle Ford (in Texas), which account for most of the current surge in U.S. oil production, the estimated recoverable fraction ranges from 1 to 2 percent. Though all of these deposits are loosely referred to as “shale oil,” Bakken and Eagle Ford oil is more precisely called “tight oil,” because it is actual, fluid oil that is trapped in the pores of shale, and it can be liberated by fracturing the rock to allow the oil to flow. In contrast, the hydrocarbon in the Green River shale is not really oil at all but a waxy substance that must be cooked at around 500 degrees Celsius to turn it into flowing oil. The technology for extracting oil from deposits like the Green River shale is far more challenging than what is required to tap into tight oil, and it has never been profitably implemented at any significant scale. There is thus no credible estimate of how much oil can be recovered from the Green River formation.

At the high end of the estimates, predicted production from Bakken and Eagle Ford together amounts to perhaps a two-year oil supply for the United States at 2011 consumption rates. That's significant but not a game-changer. Even if it were to prove possible to achieve production rates comparable to those of Saudi Arabia, that would only mean that we would deplete the resource faster and bring on an oil crash sooner.

What would it take to ramp up production to such high levels? Technological developments have made it possible to tap into tight oil, but these are not the same kinds of technological developments that have given us ever more powerful computers and cellphones at ever declining prices. Oil production technology is giving us ever more expensive oil with ever diminishing returns for the ever increasing effort that needs to be invested. According to the statistics presented by J. David Hughes at the AGU session, we are now drilling 25,000 wells per year just to bring production back to the levels of the year 2000, when we were drilling only 5,000 wells per year. Worse, the days are long gone when you could stick a pitchfork in the ground and get a gusher that would produce for years. The new wells are expensive (on the order of $10 million each in the Bakken) but give out rapidly, as shown in the following figure from Hughes' talk illustrating the typical production curve.

Tight oil is headed for a Red Queen's race, where you have to keep drilling and drilling and drilling just to keep your production in the same place. At several million dollars a pop, that adds up to a big annual investment, and eventually you run out of places to put new wells. The following figure, also from Hughes' talk, shows that if you try to increase production by drilling wells faster, you just wind up running out of oil sooner. High oil prices may make it profitable to recover more oil from unconventional deposits, but ultimately physics rules.

In his talk at the AGU session, Charles A.S. Hall pointed out that the energy return on investment—the amount of energy you get out of a well vs. the energy needed to produce the oil—has been getting steadily worse over time. As long as there is some net energy gain and some profit to be made, drilling may go ahead, but the benefits to the energy supply deteriorate at the same time as the collateral damage to climate (in the form of increased carbon dioxide emissions per barrel of oil produced) goes up. The market is not laying the foundations for an era of unending oil-based prosperity. The market is pushing inexorably toward investment in expensive technologies to extract the last drop of profit through faster depletion of a resource that's guaranteed to run out. If we're going to invest in expensive energy technologies, it would be better to pick long-term winners rather than guaranteed losers.

The Myth of “Saudi America” (Slate). The conclusion:


Whales were driven to the brink of extinction before petroleum replaced whale oil, and we may well fry our planet—and bankrupt ourselves while doing so—before we're finally forced to kick the fossil fuel habit. It will be hard to muster the resources to develop replacements for fossil fuel energy if we wait until both the economy and climate are in ruins. We are in for a hard landing if we don't use our current prosperity to pave the way for a secure energy and climate future.

And the Chris Nelder article cited echoes that sentiment:


The fact is, 40 years probably isn’t enough time to make that transition. As I discussed last November, we really needed to begin it 40 years ago. We will probably wind up drilling everything anyway because we’ll need the oil to rebuild our infrastructure, having started on the transition so late. But maximizing our production now to satisfy a short-term political need, or to temporarily plug a structural trade and budget deficit, would be stupid and counter-productive and foreshorten our already too-short window for transition.

Our remaining prospects aren’t a fresh full pint of beer, and drilling them is no solution to peak oil. If we were to achieve the energy independence production rate we might feel better for a decade or so, but it would come at the price of decades more of greatly diminished domestic production later on—at the very time when global oil exports are declining fastest and becoming intolerably expensive.

See: The Last Drops: How to Bridge the Gap Between Oil and Green Energy (PopSci)
.
Posted by escapefromwisconsin at 7:36 PM