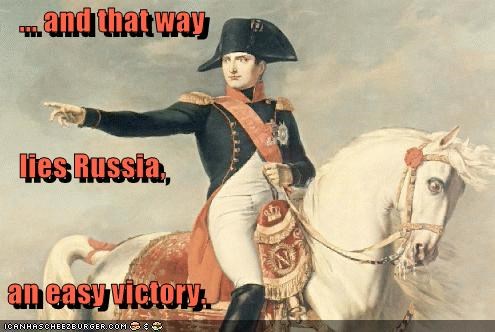 It wasn't the Russian winter that ended Napoleon's Russian campaign:


In June, 1812, Napoleon’s army assembled in eastern Germany. With magnificent fanfare, Napoleon reviewed his troops on the west bank of the Niemen River on June 22, 1812. Napoleon’s engineers built a pontoon bridge over the river and the army entered Russian-controlled Poland the next day. Things were going well—the summer, though hot and dry, made marching over the roads easy. The supply columns stayed slightly ahead of the soldiers, so food was readily available, and the soldiers were in good health. Though military hospitals were established along the route to Poland in Magdeburg, Erfurt, Posen, and Berlin, there was little need for their services. The army reached Vilnius in four days, meeting no resistance from Russian troops.

Poland is where things started going badly for Napoleon. He found the region filthy beyond belief. The peasants were unwashed, with matted hair and ridden with lice and fleas, and the wells were fouled. Since the army was now in enemy territory, the supply trains had to move to the rear. The roads were soft with loose dust or were deeply rutted from the spring rains; the supply trains lagged farther and farther behind the main body of soldiers, and it became difficult to provide food and water. The army was so huge that it was nearly impossible to keep military formation intact, and the greater part of the army dissolved into straggling, sprawling mobs. Many of the soldiers pillaged the homes, livestock, and fields of the local peasants. Nearly 20,000 army horses died from lack of water and fodder on the way to Vilnius. The homes of the peasants were so filthy that they seemed to be alive with cockroaches. The typical battlefield diseases of dysentery and other intestinal diseases began to appear, and though new hospitals were set up in Danzig, Königsberg, and Thorn, they were unable to deal with the large numbers of sick soldiers sent back to the rear.

But Napoleon’s problems were just beginning.

Several days after crossing the Nieman, a number of soldiers began to develop high fevers and a red rash on their bodies. Some of them developed a bluish tinge to their faces and then rapidly died. Typhus had made its appearance.

Typhus had been present in Poland and Russia for many years, but it had gotten worse since the Russian army had devastated Poland while retreating from Napoleon’s forces. A lack of sanitation combined with the unusually hot summer made an ideal environment for the spread of lice. Typhus is caused by the organism Rickettsia prowazekii. It would be an entire century after the 1812 campaign before scientists realized that typhus is found in the feces of lice.

The typical French soldier was dirty and sweaty and lived in the same clothes for days; this is the perfect environment for lice to feed on his body and find a home in the seams of his clothing. Once the clothes and skin of the soldier were contaminated with lice excrement, the smallest scratch or abrasion would have been enough for the typhus germ to enter the soldier’s body. To compound the problem, the soldiers were sleeping in large groups in confined spaces for safety; they were concerned that the Russians would attack or the Poles would retaliate. This closeness allowed the lice to jump quickly to soldiers who were not infested. Only a month into the campaign, Napoleon lost 80,000 soldiers who were either incapacitated or had died from typhus. Under military surgeon Baron D.J. Larrey, the army’s medical and sanitary measures were the finest in the world, but no one could have coped with the scale of the epidemic. An eyewitness account gives details of one soldier’s experience with a lice infestation:

Bourgogne went to sleep on a reed mat and was soon awakened by the activities of the lice. Finding himself literally covered with them, he stripped off his shirt and trousers and threw them into the fire. They exploded like the fire of two ranks of infantry. He could not get rid of them for two months. All of his companions swarmed with lice; many were bitten and developed spotted fever (typhus).

On July 28, three of Napoleon’s officers raised concerns with him that the fight with the Russians was becoming dangerous. The loss of troops from disease and desertion had reduced his effective fighting strength to about half. Adding to this difficulty, the problem of finding provisions in hostile territory was becoming daunting. Napoleon listened to their arguments and agreed to end the campaign, but only two days later, he changed his mind and told his generals: “The very danger pushes us on to Moscow. The die is cast. Victory will justify and save us.”

So Napoleon and his sick, weary soldiers continued on. Smolensk fell to Napoleon on Aug. 17, and Valutino fell quickly after that. The Russians retreated as the French advanced, drawing Napoleon deeper into Russian territory. Napoleon had split his army into three parts. By Aug. 25, Napoleon had lost 105,000 of his main army of 265,000, leaving just 160,000 soldiers. Within two weeks, typhus had reduced the army to 103,000.

Napoleon Wasn’t Defeated by the Russians: Tchaikovsky’s 1812 Overture gives too much credit to cannons (Slate). The course of history changed by tiny lice.
Posted by escapefromwisconsin at 10:13 PM