All I Need Is The Air That I Breathe 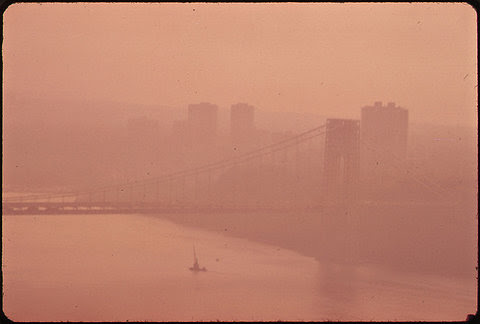 A new study led by researchers at Harvard School of Public Health (HSPH) has found an association between reductions in fine particulate matter and improved life expectancy in 545 counties in the U.S. from 2000 to 2007. It is the largest study to date to find beneficial effects to public health of continuing to reduce air pollution levels in the U.S.


Sixty years ago thick smog descended on London, contributing to the deaths of an estimated 4,000 people. The four-day "pea-souper", while worse than usual, was a familiar experience for Londoners.Visibility was so poor buses and taxis ground to a halt, forcing commuters to hurry underground to use the Tube.

In the Isle of Dogs in east London, the fog was reported to be so thick people could not see their feet and animals dropped dead at the Smithfield Show. According to the Met Office "the smoke-like pollution was so toxic it was even reported to have choked cows to death in the fields".

A Ministry of Health comparison between the excess of deaths registered in the weeks ending 13 and 20 December and those occurring in the preceding weeks produced estimates of the number of deaths caused by the smog ranging from 3,412 to 4,075.

The main pollutant, sulphur dioxide, was linked to coal burning which was said to have reached exceptional levels. The legacy of the Great Smog was the Clean Air Act of 1956 which introduced a number of measures to reduce air pollution. Furnaces could no longer emit "dark smoke" and households were offered grants towards the cost of converting their coal-burning grates to smokeless fuel.

In these I notice a familiar trend. A problem arises, causing legislation to correct the problem. Eventually, those who experienced the problem directly and knew first-hand why the laws were passed either die off or forget. The next generation which has had no direct experience of the problem is convinced by certain vested interests that the problem never existed in the first place, and that the regulations are "needless" and "burdensome" and that people will be much better off without them. This is true of the environmental movement - the successful legistlation has cleaned things up to the point where many people, who no longer have to live in such dirty environments, can be convinced that such laws are unnecessary. This was also true of the finacnial industry laws that prevented excessive risk in banking. Thus, success breeds it's own failure.

For those who forget what the U.S. looked like in the 1970s, here is a reminder:

This Is What U.S. Would Look Like Without Environmental Protections (Photos) (Treehugger)

What's amazing to me is that people deny the existence of air pollution because they can't see it, but are sure that angels and UFOs are real.

Posted by escapefromwisconsin at 7:25 PM