The Other White Meat 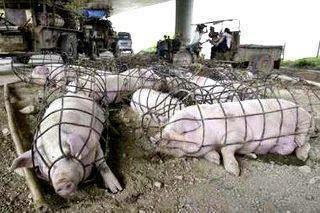 Most pork is contaminated, often with antibiotic-resistant bacteria:


A Consumer Reports analysis of pork purchased in American supermarkets and other shops reveals that many samples contained surprisingly high amounts of a bacterium that causes food poisoning. Compounding the concern is that many of the samples of the bacterium, Yersinia enterocolitica, proved to be antibiotic-resistant.

The magazine analyzed 148 samples of pork chops and 50 samples of ground pork for contamination, the meat was selected from a variety of stores in six American cities -- the stores from where the samples were purchased were not named.

The magazine notes their concern that the majority of the samples it analyzed were resistant to at least one of the medically prescribed antibiotics they used for testing in the lab. Many factory-farm raised animals are commonly fed antibiotics to keep them 'healthy' -- the practice is widely criticized because of the horror-movie potential for resistant strains of bacteria to dominate, and sure enough ... according to the report:

Some of the bacteria we found in 198 samples proved to be resistant to antibiotics commonly used to treat people. The frequent use of low-dose antibiotics in pork farming may be accelerating the growth of drug-resistant “superbugs” that threaten human health.

Also of note, about 20 percent of the 240 pork products analyzed also tested positive for the growth-hormone drug ractopamine. Originally developed as an asthma medication for humans, it was never approved for that use, but was later employed to increase pigs’ growth and lean muscle mass. (God forbid Eli Lilly should let a drug go to waste.) It’s a controversial drug, and is banned in the European Union, China, and Taiwan -- Consumer Reports' food-safety experts posit that no drugs should be used in healthy animals to promote growth.

Don't worry, the government is on it - forcing small farmers to slaughter their free range pigs:


In a undoubtedly positive step, two Australian supermarket chains, accounting for 80% of all supermarket sales in the nation, are phasing out selling pork and eggs sourced from factory farms.

Common Dreams reports that Coles will stop using factory farmed pork and eggs in its house branded products as of January 1. Meanwhile, Woolworths has already begun its phase out, with all of its eggs coming from cage-free chickens and all of its pork products coming from farms not confining pigs in stalls from the middle of 2013.