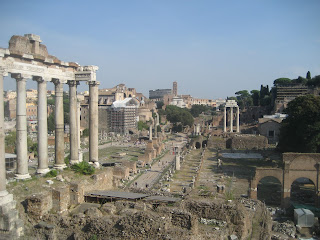 Been on a real Roman kick lately. Read Goldsworthy's How Rome Fell and Ward-Perkins' The Fall of Rome and the End of Civilization. Currently reading Are We Rome? by Cullen Murphy. Highly recommended. In nay case, these historical links popped up recently. Enjoy:


...[B]oth run-of-the-mill banking and high finance took place in the Forum. The former was performed by money lenders (in Latin, argentarii), who were mostly plebeians. The latter, as far as we know, was almost exclusively run by and for the patrician classes: senators and knights (equites). Money lenders were a professional group (many of them were former slaves). Taking deposits, making loans, and assaying and changing money (which was then made of precious metals—gold, silver, and bronze—in different denominations) was how they made their living. Those patricians who were involved in high finance, however, often had a patrimony (land, real estate, slaves) and an income they could live off. Yet they sought to increase their wealth by lending both their money and other patricians’ money. To lend money for interest in Latin is called faenerare; hence, these people were called faeneratores. They were “specialized businessmen who spent all their time in the forum”, and who hung around the Janus medius, a vaulted passageway in the Forum: “Both creditors and lenders could be found there—that is to say both passive investors seeking to place their money and also intermediaries arranging credit, who were experts at investing money”

Run-of-the-mill banking was regulated in ancient Rome, and argentarii needed to maintain accounts of their transactions. For Latin jurists, “what characterized a bank [argentaria] was the twofold service that it provided: receiving deposits and advancing credit”. Some deposits were just for safekeeping and yielded no interest (vacua pecunia), while others did earn interest (creditum). The latter could be invested, but not the former. However, most of the loans advanced by the argentarii were apparently short term and local. In essence, the argentarii were your neighborhood bank—that is, banking for the average Joe (or the average Caius).

Aristocratic finance—the faeneratores—was quite a different business, a sort of proto-“shadow banking system.” Elite financiers weren’t subject to any special regulations. They would invest in far-flung places, especially the provinces, and would have intermediaries (societas danistaria) making sure their loans produced a good return. Sometimes they would act as private wealth managers (procuratores) for other patricians who didn’t want or didn’t know how to invest their money (unlike in the Middle Ages, lending with interest was not taboo in Rome, but spending all the time in the Forum was not considered very classy for a senator). Elite financiers had political power and, throughout Roman history, they would exercise it.

Historical Echoes: How Do You Say “Wall Street” in Latin? (Liberty Street)


The famous "panic" of A.D. 33 illustrates the development and complex interdependence of banks and commerce in the Empire. Augustus had coined and spent money lavishly, on the theory that its increased circulation, low interest rates, and rising prices would stimulate business. They did; but as the process could not go on forever, a reaction set in as early as 10 B.C., when this flush minting ceased. Tiberius rebounded to the opposite theory that the most economical economy is the best. He severely limited the governmental expenditures, sharply restricted new issues of currency, and hoarded 2,700,000,000 sesterces in the Treasury.

The resulting dearth of circulating medium was made worse by the drain of money eastward in exchange for luxuries. Prices fell, interest rates rose, creditors foreclosed on debtors, debtors sued usurers, and money-lending almost ceased. The Senate tried to check the export of capital by requiring a high percentage of every senator’s fortune to be invested in Italian land; senators thereupon called in loans and foreclosed mortgages to raise cash, and the crisis rose. When the senator Publius Spinther notified the bank of Balbus and Ollius that he must withdraw 30,000,000 sesterces to comply with the new law, the firm announced its bankruptcy.

At the same time the failure of an Alexandrian firm, Seuthes and Son due to their loss of three ships laden with costly spices and the collapse of the great dyeing concern of Malchus at Tyre, led to rumors that the Roman banking house of Maximus and Vibo would be broken by their extensive loans to these firms. When its depositors began a "run" on this bank it shut its doors, and later on that day a larger bank, of the Brothers Pettius, also suspended payment. Almost simultaneously came news that great banking establishments had failed in Lyons, Carthage, Corinth, and Byzantium. One after another the banks of Rome closed. Money could be borrowed only at rates far above the legal limit. Tiberius finally met the crisis by suspending the land-investment act and distributing 100,000,000 sesterces to the banks, to be lent without interest for three years on the security of realty. Private lenders were thereby constrained to lower their interest rates, money came out of hiding, and confidence slowly re-turned.


Needless to say, this picture of the life of the Roman poor as one of wall-to-wall boozing and gambling does not come from the poor themselves.

I've been quoting, more or less word for word, the description of social conditions in the capital city of the Roman Empire given by a decidedly upmarket historian of the 4th Century, Ammianus Marcellinus. To be fair to Ammianus, he had some pretty sharp things to say about the elite, too. They're the sort of people who are all over you one day and don't even recognise you the next, the sort who spend far too much money on posh dining or - to introduce a characteristically Roman touch - the sort who surround themselves with battalions of eunuch servants. But his view of the behaviour of the underclass is the kind of fantasy that the rich have had about the poor ever since.

My guess is that Ammianus had never actually set foot in an ordinary Roman bar and had never thought about the sheer illogicality of what he was claiming - if these guys really were desperately poor, how on earth could they afford to drink all night?

As for the gambling, it's a classic case of moral double standards. The Roman elite were keen gamblers.The emperor Claudius even wrote a book about how to win at dice, and one of the most famous phrases ever spoken by a Roman general comes straight from the gaming table: "Alea iacta est" (the die is cast), as Julius Caesar is supposed to have said as he crossed the river Rubicon in 49BC. But as soon as the poor showed any similar fondness for games of chance, the elite got into a frightful sweat and started predicting imminent moral collapse.

By and large, posh Romans didn't have much time for poor Romans, free or slave - although they were no doubt a bit scared of them too. They regularly referred to them as a "turba" (rabble) or "multitudo" (the masses). But whatever slurs and nicknames were used, the misdemeanours attributed to the ancient Roman poor by their rich critics are strikingly similar to those we still hear now.

For a start, the poor were often said to be guilty of abusing the services offered to them - not by the welfare state but by rich benefactors. Ammianus, for example, pointed in disgust to the way that the poor spent their days lurking under the awnings in the theatre, which had actually been put up so that the ordinary Roman theatre-goers could be protected from the beating sun during performances in the open air.Here, he huffed, were people practically living under them.

The other way in which the comfortably-off traditionally talk of those less fortunate than themselves is, of course, to divide them into the Good Poor and the Bad Poor. In fact, when Tacitus wrote of the plebs sordida it was explicitly to contrast them with what he called "the respectable elements among the common people".

Talking about the death of the monstrous emperor Nero, he claimed the "filthy poor", the squanderers and the racing addicts, lamented the death (for Nero had been an easy touch for entertainments and hand-outs). Predictably enough, the "respectable elements" were those who welcomed the new regime of austerity and cost-cutting under the in-coming emperor Galba.

That division is still with us. The 19th Century notoriously had its "deserving" and "undeserving poor". Our own equivalent of the "deserving poor" is "hard-working families". Politicians of all parties are forever parroting this pious phrase on television or radio. It's almost as if they've been told to never say the simple word "families" without its knee-jerk accompanying adjective.

Why the rich look down on the poor (BBC)
Posted by escapefromwisconsin at 7:33 PM