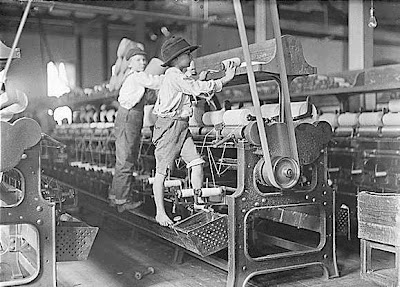 Fascinating article on the BBC about a modern incidence of corvee labor – Uzbekistan requires its citizens to handpick cotton in the fields for free.


Uzbekistan is one of the world's main producers of cotton and the crop is a mainstay of its economy. The government controls production and enforces Soviet-style quotas to get the harvest off the fields as quickly as possible.

A history of using child and forced labour at harvest time has led to a number of retailers - including H&M, Marks and Spencer and Tesco - to pledge to source their cotton from elsewhere.

In response, earlier this year Uzbekistan's Prime Minister Shavkat Mirziyayev issued a decree banning children from working in the cotton fields. Yet many adults, including teachers, cleaners and office workers, are still forced to return to the land during October and November.

This year, like last year, medical staff have been ordered to join them. There are reports of patients in towns being turned away because their doctor is "in cotton".

I first heard about Uzbekistan’s forcing its citizens to pick cotton because it was used as a prime example of extractive institutions on the Why Nations Fail blog:


Government-imposed prices at which you’re forced to sell; coerced labor; expropriation of assets by the intelligence services and the president’s family. These are just some of the examples of what we call extractive economic institutions — economic institutions designed to extract resources from the population and businesses for the benefit of a narrow elite.

Like almost all nations that are poor, Uzbekistan fails because its people operate under extractive economic institutions, which provide few incentives for investment or technological ingenuity, and force people to engage in activities that they do not wish or are not well-suited to (such as farmers being forced to grow crops that they don’t want and children being forced to pick cotton rather than learn in school).

And the important point is this: these extractive economic institutions are not there by mistake. They have been designed this way for the benefit of the elite. There was no coerced child labor in Uzbekistan when cotton was produced by state-owned firms. This economic institution was introduced when Karimov and his cronies realized that at the prices they were imposing on farmers, cotton production was going to plummet.

This is especially ironic as cotton-picking was a major driver of slavery and indentured servitude in the antebellum United States. The mechanical cotton picker sent millions of former slaves and sharecroppers to northern industrial cities just in time for deindustrialization. Northern cities became ghettos as whites got in their automobiles and decamped to seperatist enclaves in the corn fields surrounding urban areas while America's formerly world-class cities deteriorated to third-world levels. From these enclaves they could wage a war on the very idea of collective purpose and civil government.

Just as no old and obsolete technology has never truly vanished, it seems like no economic system has ever truly died. It’s almost a guarantee that somewhere on earth today you will be able to find “extinct” economic forms - corvee labor, debt bondage, indentured servitude, chattel slavery, plantations, sharecropping, etc., if you look hard enough. It’s a corrective to assuming that our mutual-obligation system of wage slavery (fixed amount of time per day in exchange for lump sum of currency and subsidized benefits) that we call a “job” is a permanent feature of the human condition.

I and others have noticed a dramatic return to unfree and unpaid labor all around the world as our economic system deteriorates. First there is the vast amount of prison labor used today, including in the United States, the world's jailer. Then there are the “unpaid internships” which keep all but the children of the rich who are subsidized by their families from the most desirable professional jobs. Then there are the “welfare to work” schemes which make the unemployed work essentially for free in lieu of welfare benefits. Then there is the vast amount of overtime “expected” of terrified salaried workers lest they get laid off in the next corporate purge.

Today’s college graduates are often referred to as “indentured servants” because they are forced to fork over large parts of their salaries in wage garnishments to college debt collection agencies in return for the “work chit” of a degree. Tell me materially how this is different from traditional indentured servitude, where people were fined heavily for being transported to America, and then forced to work to pay back their sponsors for free. And of course, the laws protecting debtors have been stripped away, returning to an almost eighteenth-century mode of unforgivable debt and no limits to what can be done to collect it. We’ve even seen the backdoor return of debtor’s prisons. Others have noted the breakdown of what’s commonly referred to as “the rule of law” in financial matters and noted the creation of separate rules and standards of conduct for the rich as opposed to ordinary people. Of course we are all free to "choose" our jobs, just as we are free to be starving and homeless as those jobs disappear.

All around the world we are regressing. Welcome to capitalist “progress.” Uzbekistan is the future.

UPDATE: A tipping point in the fight against slavery? (BBC)


There are, shockingly, more people in slavery today than at any time in human history - but campaigners think the world is close to a tipping point and that slavery may be eradicated in the next 30 years. The estimated number of people in slavery - 27 million - is more than double the total number believed to have been taken from Africa during the transatlantic slave trade.

Ship records make it possible to estimate the number of slaves transported from Africa to the Americas and the Caribbean, from the 16th Century until the trade was banned in 1807 - and the figure is about 12.5 million people. The figure of 27 million slaves today comes from researcher Kevin Bales, of Free the Slaves - who blames the huge figure on rapid population growth, poverty and government corruption.

Many people still think of slavery as a thing of the past, but it exists in many forms, on every continent - ranging from sex and labour trafficking, to debt bondage where people are forced to work off small loans.

"I often think about a quarry slave from North India," says investigative journalist Ben Skinner, who has travelled all over the world documenting cases of slavery. "I could go in at night and interview him, so I asked him why he didn't run away. It was because he feared the extraordinary violence of the quarry contractor who held him to a minuscule debt.  "In his world, the contractor was god. He was not only the taker of life but also the giver of sustenance. When we look at why slavery has persisted we have to look at breaking those cycles of dependence."

Posted by escapefromwisconsin at 12:31 PM