The Architecture Of Doom

If you want to know why architects have lost all relevance to the modern world, look no further than this building in London: 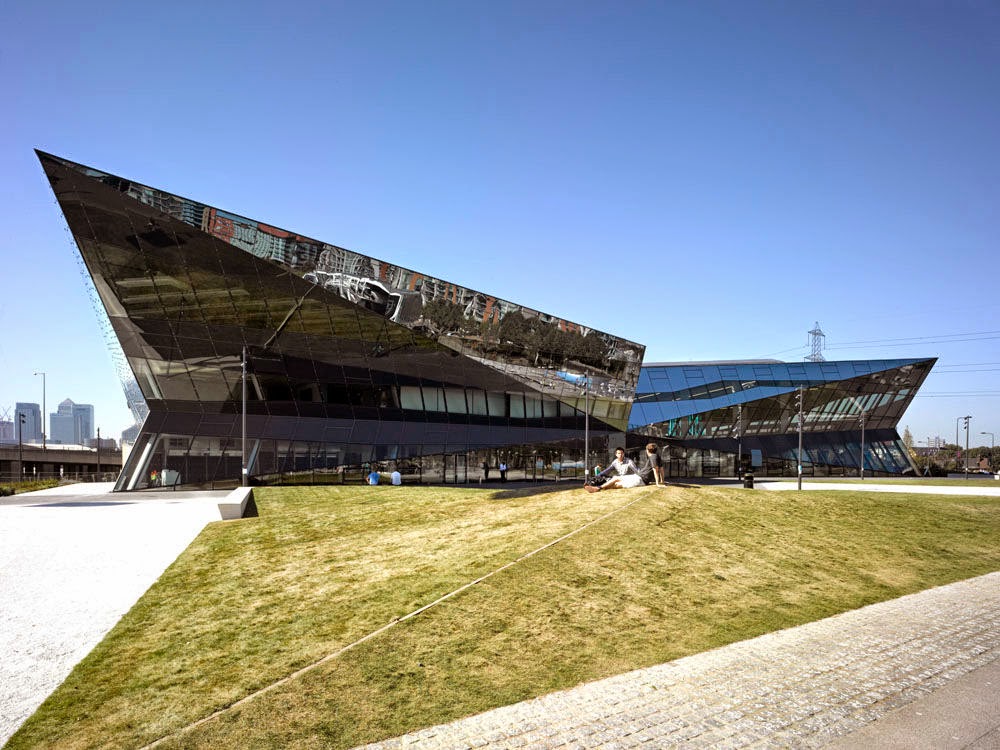 Can anyone conceive of a building that invokes more of a feeling of doom and dread than this aggressive black crystal jutting from the Royal Victoria Dock? I wonder what Her Majesty or Prince Albert would say. Would they flee in terror? Its sleek dark, opaque, all-glass form and extreme angles might seem to the ideal monument to the future: to our all-seeing surveillance state, our armies of black-clad police spraying tear gas at protesters, our impersonal debt-based market economies selling off the civic structures built by our great-grandparents, and our chaotic, disjointed every-man-for-himself social structure. It looks like a place where the one percent might be manipulating the killer drones flying over the world’s major cities even as we speak. I can picture it being full of these guys: 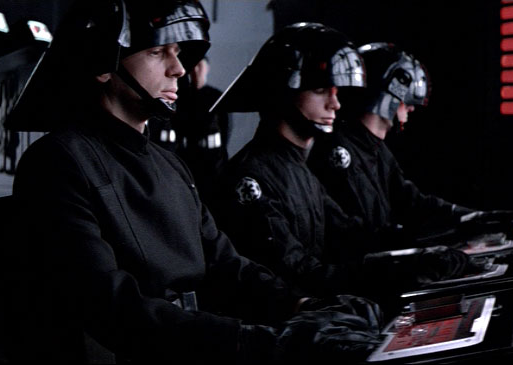 Even Darth Vader himself would be hesitant setting foot inside this structure.

In fact, you might wonder which evil international corporation is headquartered here. It looks perfect for the likes of Blackwater (excuse me, Xe) or maybe some other privatized security/weapons firm (Halliburton? Monsanto?) No, believe it or not, this angular glass carbuncle is intended to be a pavilion devoted to promoting sustainable cities (!!!) I swear am not making this up:


A Sustainable Cities Initiative by Siemens, conceived by Wilkinson Eyre Architects, has recently opened in London. The Crystal is a dramatic form with a glazed structure, creating a new independent global hub for debates on sustainable urban living and development.

Because when I think of sustainable green cities, this is what pops into my head. You mean it’s not what pops into your head? That, my friend, is why you are not a celebrity architect. It’s like the ultimate "fuck you" to Christopher Alexander and eveything he stands for.


… the form draws inspiration from the form of a crystal. The crystalline geometry of the architecture forms a series of angular shapes, creating a distinctive architectural focal point for the area. As the building occupies a prominent space, it has been designed as 'a pavilion in a park'.

Ah yes, a pavilion in a park. Positively pastoral, isn’t it. I can almost picture the women in bonnets picnicking around it and picking flowers while sheep graze nearby. Eat your heart out Frederick Law Olmstead. I suppose it works as a ‘focal point’, that is, if you don’t poke out an eye looking at it. A hundred years ago, this is what a pavilion in a park looked like – The Palace Of Fine Arts in San Francisco by Maybeck.

Not very stylish is it? And as for crystals, we used to take inspiration from their transparency and lightness, not their jutting forms . Compare the Dark Crystal above with the famous Crystal Place of 1851:

Or this copy in a park in Madrid:


The design does not have front and back facades or a traditionally defined roof. Instead it has been conceived as a set of facets which creates a striking impression when viewed from street level and when seen from above.

Front and back facades are so twentieth-century don’t you think? What’s really important is how the building looks from the jet airplanes flying overhead (!!).


The envelope of the crystal-shaped design aims to both reflect the building's context whilst also having a degree of transparency to help connect the building with its surroundings. This careful use of translucent and mainly opaque glazing has been designed to minimise the running costs of the building.

Because nothing minimizes costs better than building an all glass building in London’s climate, right? I mean, how much "greener" can you get? And it blends it with surroundings so well, I can hardly even tell it’s there! And to top it all off, how much greener can you get than a building that utilizes large amounts of concrete, glass and steel for no discernible purpose other than some kind of visitor’s center and symbolic display? Are there really no vacant spaces in London to house these things? Maybe they can set up shop in some foreclosures on the High Street. Aren’t we really just looking for ways to spend money and give designers something to do? Is that really green?


...It will be home to Siemens' global Centre of Competence Cities, a team of multi-disciplinary urban experts, which aims to encourage the growth of sustainable cities through partnerships, research and expert collaboration. In addition to this, The Crystal will house the world's largest exhibition on the future of cities. The interactive exhibition will guide visitors through the urban infrastructure of the future, focusing on possibilities for sustainable mobility, building technologies, power and water supplies, and healthcare.

Yes, this is the future they have in store for us. If this is the future of cities, you can keep it. Architects are nothing if not servants of the powerful, enacting their visions in glass and steel for the rest of us to see and obey (high-class whores in Philip Johnson’s famous line). Is it any wonder people fear the future? As I’ve said before, humans are symbolic creatures, and architecture is always a reflection of the spirit of the age on a fundamental, even subconscious level. What is this building really saying to us? More than the architects who designed it intended to, methinks. Our endless desire for ad-hoc novelty and our absolute rejection of the past in favor of the latest work of daring sculptural constructivism by the latest celebrity "genius" churned out by Harvard graduate school or The Bartlett School of Design is a reflection of that spirit. And, oh yeah, what else was Siemens involved with?

Architecture is a symbolic art. All art appeals to the emotions on a deep level. What does this building make you feel?

Is it any surprise that medieval buildings are lovingly restored and looked after for centuries, whereas modernist building are ripped down after thirty years? If this is the future, I might prefer the past with its stately manors, columned courthouses, timbered barns, brick houses, covered bridges, steepled cathedrals, vaulted railway stations, and colonnaded plazas. And if you need proof that the future doesn’t have any dialogue with the past, check out his addition to a nineteenth-century museum in Amsterdam: 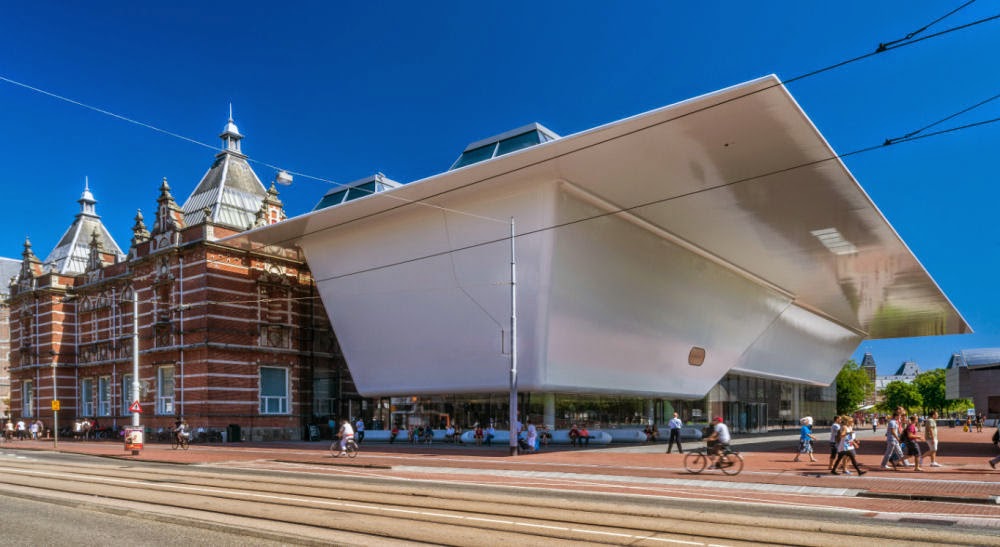 It looks like one of those injection-molded plastic pieces of furniture in those nineteen-fifties advertisements (‘jive-plastic’ in Kunstler-speak). How much more can we get a building to look like a mass-produced plastic industrial product? It’s pretty obvious where architects are getting their inspiration, isn’t it? Say, maybe we can all live in iPods! This monstrous form seems wildly out of proportion with, well, everything, doesn’t it?


From the outside, the new building appears as a floating form which spreads outwards at the roof, creating a broad and flat surface. It matches the height of the original building and creates an overhang where there is a sheltered outdoor plaza space at ground level. Underneath there is an entirely smooth white, oblong mass, canted upwards at one end and supported on white columns. This has already earned the space the nickname, 'the bathtub'.

Architects sure love their "floating forms" don’t they? Symbolic of being untethered from earth, nature, or even reality? And calling a building a bathtub is hilarious – I’m not sure it’s entirely meant as a compliment. It’s particularly amusing because architects in school are constantly told to avoid creating a "bathtub" – places where water can pool and eat away at or even structurally weaken the building. Here apparently the architects actually set out to create a bathtub! Such audacity!


Within the white form there are the second-floor galleries, auditorium and offices above it. The spaces are entirely surrounded by 271 panels of a pioneering new composite material which uses Twaron® fiber as its key ingredient. Down below the ground-floor level is entirely encased within transparent glass, housing the main entrance and lobby, museum show and restaurant.

Ah, yes, 271 panels of Twaron®! Gotta use the latest proprietary material. I’m sure there will be plenty of that stuff sitting around a hundred years from now when the time comes to redo the façade, right? I can’t even tell which is the new and which is the old, can you? It’s especially sad because Amsterdam used to be a place where there were actually some modernist buildings that were attractive and well-designed. So much for that.

"Modern" architecture seems to be little more than an endless creation of ever more elaborate forms of sculpture by elite-school cult "geniuses," with heroic amounts of bravura engineering and high-tech fossil-fuel based materials thrown at it to "make it work" regardless of usefulness, constructability or budget. And, of course, it doesn’t work, because the laws of not only physics but of such mundane dictates like water, rain, sun, wind, snow etc., which are suitably ignored. Forget about proportion, context, historical forms, usability, and all that "traditional" nonsense; everything must be a stand-alone showpiece of inhabited post-modernist sculpture, because that’s what the lords of finance dictate (with plenty of "exclusive" spaces for them to hide from the rest of us, natch). That’s how you become a celebrity like Frank Gehry. Check out the latest crazy-quilt monstrosity from this "genius" in Toronto: 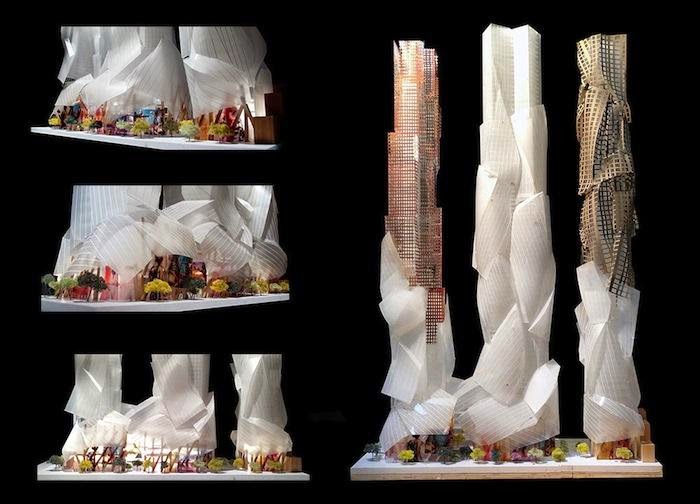 Once upon a time, architecture used be inspired by nature. Symmetry, proportion, the golden ratio, natural materials, things like that. Now, all buildings seem to be disjointed and asymmetrical shards made from mass-produced materials. Again, what story are we telling ourselves? A thousand years from now, what will people make of the society that built these buildings? (assuming they exist in pictures, because I doubt the structures will be standing)

What does it say that the oversized dehumanizing constructivist sculptures once so beloved of Fascist and Communist leaders is now that main architectural idiom of neoliberal capitalism? What does it say that architects are now the center of personality cults? What does it say that more and more of us are hungry and homeless while architects build ever more elaborate towers and pleasure domes for Arab oil sheikhs, Russian mafiosi and Chinese bureaucrats? Even Nazi Germany thought long-term, building in something called ruin value into their mad schemes. Today’s capitalists can’t even think beyond next quarter’s profits. At least we can harvest and materials for whatever vernacular buildings we end up constructing after the oil runs out and the architecture schools are all closed.
Posted by escapefromwisconsin at 12:25 PM