Maybe Kunstler's onto something after all:


RED HOOK, N.Y. — It was harvest time, and several farm hands were hunched over a bed of sweet potatoes under the midday sun, elbow deep in soil for $10 an hour. But they were not typical laborers.

Jeff Arnold, 28, who has learned how to expertly maneuver a tractor, graduated from Colorado State University. Abe Bobman, 24, who studied sociology at Wesleyan University in Connecticut, was clearing vines alongside Nate Krauss-Malett, 25, who went to Skidmore College.

Mr. Krauss-Malett said he became interested in farming after working in a restaurant and seeing how much food was wasted. Mr. Bobman had the same realization working in the produce section at a grocery store before college.

They had been in the fields here at Hearty Roots Community Farm in the Hudson Valley since 7 a.m. They all said they could not imagine doing any other job.

“Farming appeals to me, and probably to other people, because it’s simple and straightforward work outdoors with literal fruits from your labor,” Mr. Bobman said. “It doesn’t feel like you’re a part of an oppressive institution.”

For decades, the number of farmers has been shrinking as a share of the population, and agriculture has often been seen as a backbreaking profession with little prestige. But the last Agricultural Census in 2007 showed a 4 percent increase in the number of farms, the first increase since 1920, and some college graduates are joining in the return to the land.

But as Stuart Saniford notes, we've got a long way to go: 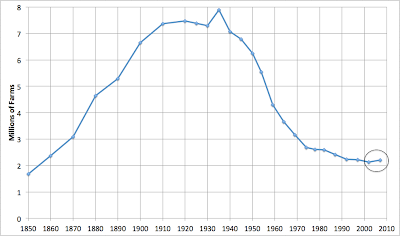 Here is more from Stuart.
Posted by escapefromwisconsin at 7:43 PM