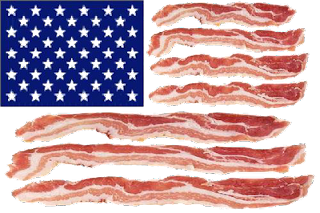 I could take Peak Oil, Peak Water, Peak Helium, Peak Phosphorus, Peak Copper, and Peak Gold. I could even live with Peak Olive Oil, Peak Coffee and Peak Chocolate and Peak Health. But this has gone too far:


Is it pork-ageddon? Britain's National Pig Association has sounded the alarm that the world should brace for an "unavoidable" bacon and pork shortage next year.

The cause of the trouble is high pig-feed costs caused by what it describes in a press release as "the global failure of maize and soya harvests."

The organization notes that new data shows that pig herds are declining at a significant rate, not just in Britain, but around the world.

However, further sources say the claim is greatly exaggerated:


The high feed prices are attributed partly to this year's widespread droughts, which have jacked up corn and soy prices and resulted in half of all U.S. counties being declared disaster areas. Some farmers have tried to cope by feeding candy to livestock.

Steve Meyer, a consulting economist to the National Pork Board (whose members are chosen by the U.S. secretary of agriculture), said U.S. pork consumers are likely to see price jumps next year as a result of this year's droughts, as the British trade group claims; however, he says the rise in prices will be slight, and he questions the group's "apocalyptic tone."

"There will be less pork, but that's happened before," Meyer told Life's Little Mysteries. "I'd be surprised worldwide if it's more than a 2 or 3 percent decrease on per-capita availability. That number hasn't changed that much in a long time."

And then there’s this from the above article:


A recent report from the Stockholm International Water Institute found that in the year 2050, the Earth's water supply will be able to sustain the expected world population of 9 billion people only if humans are deriving just 5 percent of their calories from animal-based foods ― meat, eggs and dairy ― instead of the current proportion of 20 percent.

One thing’s certain, the supplies of things have begun to shrink. That’s Peak in my book. On a side note – I wonder how bad the meat from animals fed gummy worms is going to be.

UPDATE: BoingBoing clears it up:

Commodity market prediction takes the Internet by storm — Good news! There is not an unavoidable bacon shortage looming in our future. Bad news! What was actually being predicted was really an increase in meat prices across the board. Droughts have completely decimated this year's corn crop, and as corn is the stuff we usually feed our meat, it's going to cost more to raise a pig (or a cow, or a chicken) next year. Key takeaways: There will still be meat, it's just going to be more spendy next year, and also don't trust the British when they offer you "bacon" because they actually mean Canadian bacon, which is different (and inferior).