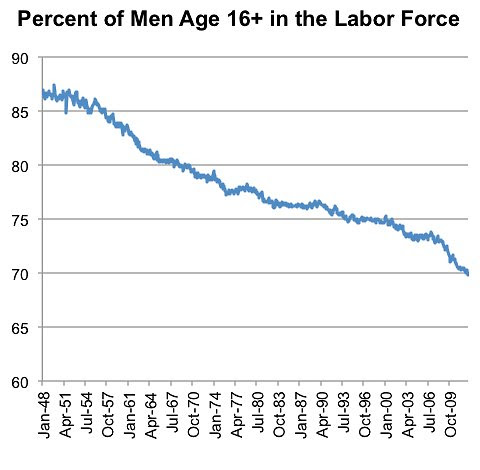 Friday’s jobs report for August was chock full of all sorts of bad news. Among the most distressing: The share of men actively participating in the labor force — that is, working or looking for work — was at an all-time low.
Just 69.8 percent of all men over age 16 were in the labor force in August, compared to a long-term average of 78.3 percent since the Labor Department began tracking these data in 1948. The share has been falling pretty steadily over the last six decades but has declined sharply in the last few years.

Some of this could be attributed to the fact that the country has been aging, so more people are of retirement age. But the participation rate has also fallen dramatically for men of prime working age, 25-54 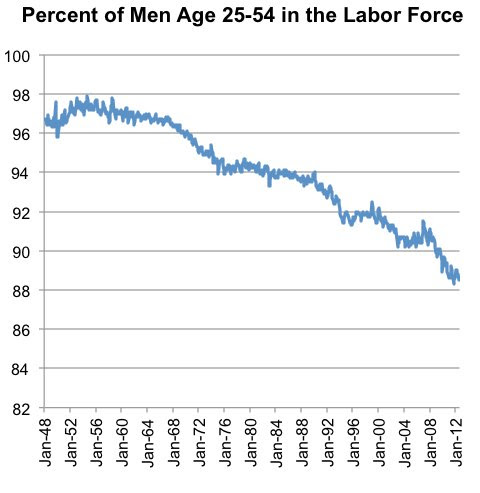 Additionally, the share of women in the labor force rose steadily from the 1940s to the late 1990s. There is some debate about what effect this had on men’s employment. Most economists I’ve spoken with have argued that women were not “taking” men’s jobs, especially since for a long time “women’s work” was distinctly different from “men’s work” and the total employment pie was growing. At the very least, though, the entrance of more women into the job market theoretically made it less essential for married men to work, even if women tend to be in much lower-paying jobs.


While millions of manufacturing jobs have been lost over the last decade, jobs in health, education and services have been added in about the same numbers. The job categories projected to grow over the next decade include nursing, home health care and child care. Of the 15 categories projected to grow the fastest by 2016 — among them sales, teaching, accounting, custodial services and customer service — 12 are dominated by women. These are not necessarily the most desirable or highest-paying jobs. But they do provide a reliable source of employment and a ladder up to the middle class. It used to be that in working-class America, men earned significantly more than women. Now in that segment of the population, the gap between men and women is shrinking faster than in any other, according to June Carbone, an author of “Red Families v. Blue Families.”

Often at the Wednesday-evening church suppers, the men would talk to me about their new situations, and after a few such conversations, I realized one reason the men were having such a hard time finding that new wheel. For the entirety of their adult lives, Russell, a 110-year-old company, played the role of dominant father: kind, generous and protective, but also overbearing, sometimes bullying and just capricious enough to keep them fighting for its affection. Even without a union, Russell made its men loyal for life by embracing the operational philosophy of the American manufacturing age: becoming a textile man was the same as becoming a man. Russell taught men how to work hard, how to support a family, how to live a good life, how to have the American dream their way.

When that structure disappeared, “there was no place for us to go,” Charles says. But more than that, there was no way for them to be. The town so revolved around Russell that when the company left, the men were virtually stripped of their identities. And there was barely anyplace left in America where being an expert on textiles could elevate you in that same way. When Charles first left Russell, all those words that used to mark his status — “dyeing,” “finishing,” “textile training” — suddenly seemed part of an ancient world, like speaking Shakespearean English, saying “thou” or “thee” out loud at the family dinner table, he said. And he thought, “Here I am, out in the world, trying to be a typewriter salesman.”

Reuben has a college degree and doesn’t seem especially preoccupied with machismo, so I asked him why, given how many different kinds of jobs he has held, he couldn’t train for one of the jobs that he knew was available: something related to schools, nursing or retail, for example. One reason was obvious — those jobs don’t pay as much as he was accustomed to making — but he said there was another. “We’re in the South,” he told me. “A man needs a strong, macho job. He’s not going to be a schoolteacher or a legal secretary or some beauty-shop queen. He’s got to be a man.” I asked several businesswomen in Alexander City if they would hire a man to be a secretary or a receptionist or a nurse, and many of them just laughed. It’s not hard to imagine a time when the prevailing dynamic in town might be female bosses shutting men out of the only open jobs.

The former Russell men are sometimes categorized by people in town as one of three types: the “transients,” who drive about an hour to Montgomery for work and never make it home for dinner; the “domestics,” who idle at the house during the day, looking for work; and the “gophers,” who drive their wives to and from work, spending the hours in between hunting or fishing.

James Chung, a market researcher for Reach Advisors, analyzed census data showing that in most of the United States, young, single, childless women in their 20s working full time have a higher median income than equivalent young men. A handful of regions in the Southeast stand out as having a particularly big disparity, including Auburn, where the median income of these women is estimated at 129 percent of the median income of similar men.

... At that point, Connie’s daughter from her first marriage, Abby, who was then 19, piped up with her own perspective on this Southern code of chivalry, which she said sounded like nonsense to her, given how the boys she knew actually behaved — hanging out in the parking lot, doing God knows what, or going home and playing video games instead of bothering to apply for college. Abby turned to Rob, who had just proclaimed his ideas about marriage, and said, “That’s so cute, it’s gross.”

Abby is not the only one questioning the old rules. At a Sunday Bible-study group I attended for teenage girls, the mother who was teaching had the girls hold hands, march in a circle and say: “My husband will treat me like the princess that I am. He will be the head of my household.” But the girls’ own ambitions seemed at odds with that vision. One girl earlier confessed that her biggest earthly temptation during her college years was likely to be “pursuing too many higher degrees.” Another was known to her friends in the group as the “future president.” I got the sense that relying on a man was not what they considered their best option.

Who Wears The Pants In This Economy? (Hanna Rosin, New York Times)

These two articles (both by women) paint a bleak future for emasculated men. It's more than just manufacturing. I've personally seen more and more women displace men in all professions. For example, where once architecture was considered a" man's profession," now over half the students are women (and in graduate school, mostly from outside the United States). It's not that women are smarter than men, it's just women from the upper class have tremendous advantages advantage over men from the lower class. The rungs on the social ladder by which men could traditionally climb are now occupied by women. Some people think it's great that women are taking over almost every profession (yes, even medicine and engineering). That would be a good thing, if there were enough jobs to go around. They're aren't (see above). This will not end well.

Posted by escapefromwisconsin at 6:29 PM