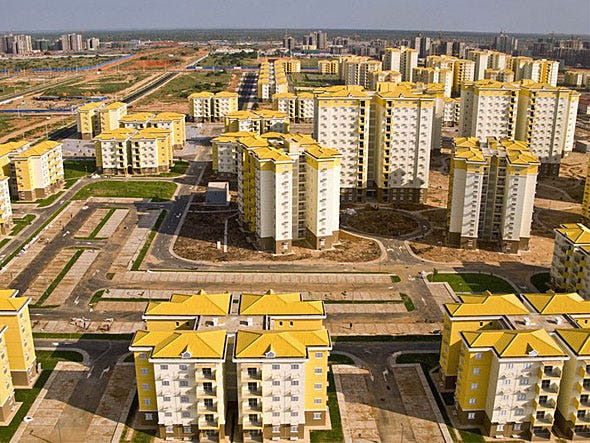 The fundamental reason we have an economy is to allocate resources. One wonders what to make of entire empty cities from China to Spain to Ireland to...Angola?

So, if I understand this article correctly, what happened was:

2. In exchange for the oil, China came in and built massive towns, similar to the cities built from scratch all over China in the last couple decades.

3. No one in Angola can afford to live there, so the towns sit as empty monoliths under the African sun.

This is also sobering to those who assume the housing market will come back back because of population growth. Just because your population is growing does not mean they can afford to buy houses.

Designed to house up to half a million people when complete, Kilamba has been built by the state-owned China International Trust and Investment Corporation (CITIC) in under three years at a reported cost of $3.5bn (£2.2bn).

Spanning 5,000 hectares (12,355 acres), the development is the largest of several new "satellite cities" being constructed by Chinese firms around Angola, and it is believed to be one of the largest new-build projects on the continent.

The jewel in Angola's post-war reconstruction crown, Kilamba is the star of glossy government promotional videos which show smiling families enjoying a new style of living away from the dust and confusion of central Luanda where millions live in sprawling slums.

But the people in these films are only actors, and despite all the hype, nearly a year since the first batch of 2,800 apartments went on sale, only 220 have been sold.
Eerily quiet

When you visit Kilamba, you cannot help but wonder if even a third of those buyers have moved in yet.

The place is eerily quiet, voices bouncing off all the fresh concrete and wide-open tarred roads.

There are hardly any cars and even fewer people, just dozens of repetitive rows of multi-coloured apartment buildings, their shutters sealed and their balconies empty.

Only a handful of the commercial units are occupied, mostly by utility companies, but there are no actual shops on site, and so - with the exception of a new hypermarket located at one entrance - there is nowhere to buy food.

After driving around for nearly 15 minutes and seeing no-one apart from Chinese labourers, many of whom appear to live in containers next to the site, I came across a tiny pocket of life at a school.

It opened six months ago, bussing in its pupils in from outlying areas because there are no children living on site to attend.

One student, a 17-year-old called Sebastiao Antonio - who spends nearly three hours a day in traffic getting to and from classes from his home 15km away - told me how much he liked the city.

"I really like this place - it's got car parking, places for us to have games like football, basketball and handball," he said.

"It's very quiet, much calmer than the other city, there's no criminality."

But when I asked if he and his family would move there, he just laughed.

"No way, we can't afford this. It's impossible. And there is no work for my parents here," he said.

His sentiments were echoed by Jack Franciso, 32, who started work at Kilamba as a street sweeper four months ago.

But then he sighed: "To live here, you need a lot of money. People like us don't have money like that to be able to live here."

And therein lies the problem.

Apartments at Kilamba are being advertised online costing between $120,000 and $200,000 - well out of reach of the estimated two-thirds of Angolans who live on less than $2 a day.

What kind of economic system builds buildings that sit empty because no one can afford to live there?

These empty cities may be the ultimate monuments to our failed economic system.

It's like a bizarro-world version of the Keynsian idea of getting the economy going by paying one group of laborers to dig holes and another to fill them in. But in this case, one group of workers are paid to pump oil, which is offshored to China. In exchange, a group of Chinese workers is paid to build a gate-guarded enclave for a non-existent pool of mega-rich locals that no one can afford to live in, and which gradually turns into a massive liability. Profit!

Business Insider has the photos.

Posted by escapefromwisconsin at 8:34 AM