1. When I first became acquainted with the idea of food forests, it naturally made sense to integrate these into the fabric of the city, rather than sterile parks which are simply lawns and trees. It was one of the founding ideas behind my concept of Permaculture cities. Since cities are now the major places of human habitation, it made sense to consider these from the standpoint of Permaculture, which is a discipline specifically designed to create sustainable human habitats. It makes sense to take a look at urban design through Permaculture principles such as closed-loop systems, integrated relationships, working with nature, etc. I even registered a blog domain name which has, sadly, been neglected. I got hung up on writing the introductory post and never finished. But I think it's an important project, and it combines two of my interests: Permaculture and urban design. 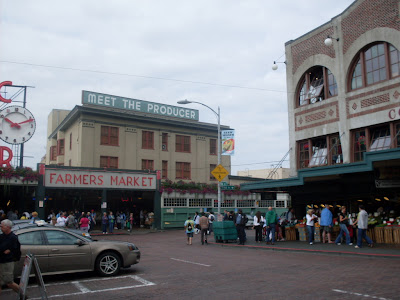 2. Pike's Place market in Seattle was one of the earliest urban farmer's markets in the nation, and when it opened it was something of an oddity in a nation where supermarkets and malls had taken over commerce. Its success was critical to the farmer's market renaissance, and now such markets are commonplace all over the country, from informal markets in town squares to formal structures, such as the one here in Milwaukee which even takes it design cues from Pike's Place Market. Seattle also launched the coffeehouse revolution via Starbucks, which also got its start in the Pike's Place Market (it's still there, and uses Starbuck's original logo). Maybe Seattle is the birthplace of yet another urban trend!
Posted by escapefromwisconsin at 1:52 PM