A few days I ago I mentioned Piranesi's etchings of the crumbling ruins of the Roman Empire's former glory that lay all around him. A famous work from the Middle Ages, the Mirabilia Urbis Romae, described the city for pilgims. The city of Rome, once the center of the Classical World where Caesars gave edicts that were carried out from the foggy British isles to the deserts of the Middle East and which boasted a population of over a million, was essentially reduced to a small town full of crumbling ruins. Descriptions of the ruins inspired travelers to the Eternal City for centuries. Wikipedia gives a description:

The legend-filled Mirabilia remained the standard guide to the city until the fifteenth century. At the time it was written, the inhabited part of Rome, the abitato, was a small city located in the bend of the Tiber River surrounded by the ruins of the great ancient city, where within the standing walls and gates of the ancient city were fields where cattle sheep and goats grazed among the temples and baths, giving to the Roman Forum its name Campo Vaccinio (the "cow pasture").

You might think that some future chronicler or artist might be doing the same of our crumbling ruins. But you would not have to wait a thousand years like the Romans did, the collapsing ruins of our empire are being documented in real time! Two French photographers have released a book entitles "The Ruins of Detroit," sure to go down with the Mirabilia and Piranesi's etchings in the annals of collapse documentation:


Yves Marchand and Romain Meffre have always been interested in the theme of ruins: coming from Europe they saw bits of it in the landscape, but they dreamed of Detroit. It's a city that is emblematic of the de-industrialization of America. Once famous as the thriving centre for automobile manufacturing--Motor City--in 1950 there were two million people living there. Because there was such great wealth, there was also some spectacular architecture.

Detroit's decline from its glory days has been catastrophic. It was the fourth-largest city in the USA by 1920, a place it held until 1950. But globalization and mechanization meant drastic loss of jobs and massive unemployment. The city went into free-fall and by 2010 its population had dropped to 700,000 people. The once-glorious buildings had become abandoned factories, vacant schools and derelict ballrooms.

The two photographers recognized that the the ruins were ephemeral and could disappear any time and they wanted to record them before they changed completely.

An exhibition of their work is being shown in a London gallery, on the eve of their book, The Ruins of Detroit (published: Steidl, 2010), being re-issued.

Yes, we can actually go see the crumbling ruins of the American Way of Life, even as our politicians continue to insist that "our best days are ahead" and "the future is ours'" yadda yadda. Somehow the crumbling ruins of the deindustrialized heartland and empty small towns with no industry other than government jobs and meth labs do not give me much confidence in those proclamations. Yet despite ruins existing around us today, anyone pointing out that America is a crumbling empire is dismissed as a crank. It's not like they let us on TV or anything. People with a longer sense of history might be more accepting, however.

The Atlantic Cities also has a story giving a quick run-down of Detroit's path to ruin. America in microcosm:

Or, for another slice of the Midwest, see Gary Indiana:

And, for a wider perspective: 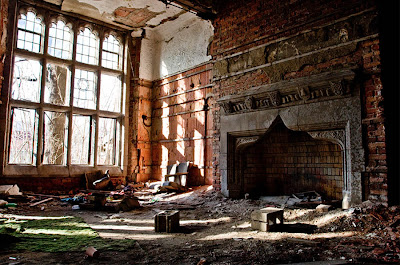 photo by David Tribby http://davidtribby.com/
Posted by escapefromwisconsin at 7:44 PM