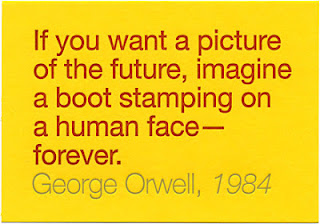 You know, I really hate writing these. It makes me seem like some sort of paranoid wacko nut. But is no one else seeing this? I mean, I'm not seeking these articles out, really. Come on, there's really no reaction to any of this?

The NSA Is Building the Country’s Biggest Spy Center (Watch What You Say) (Wired):


Under construction by contractors with top-secret clearances, the blandly named Utah Data Center is being built for the National Security Agency. A project of immense secrecy, it is the final piece in a complex puzzle assembled over the past decade. Its purpose: to intercept, decipher, analyze, and store vast swaths of the world’s communications as they zap down from satellites and zip through the underground and undersea cables of international, foreign, and domestic networks. The heavily fortified $2 billion center should be up and running in September 2013. Flowing through its servers and routers and stored in near-bottomless databases will be all forms of communication, including the complete contents of private emails, cell phone calls, and Google searches, as well as all sorts of personal data trails—parking receipts, travel itineraries, bookstore purchases, and other digital “pocket litter.” It is, in some measure, the realization of the “total information awareness” program created during the first term of the Bush administration—an effort that was killed by Congress in 2003 after it caused an outcry over its potential for invading Americans’ privacy.

But “this is more than just a data center,” says one senior intelligence official who until recently was involved with the program. The mammoth Bluffdale center will have another important and far more secret role that until now has gone unrevealed. It is also critical, he says, for breaking codes. And code-breaking is crucial, because much of the data that the center will handle—financial information, stock transactions, business deals, foreign military and diplomatic secrets, legal documents, confidential personal communications—will be heavily encrypted. According to another top official also involved with the program, the NSA made an enormous breakthrough several years ago in its ability to cryptanalyze, or break, unfathomably complex encryption systems employed by not only governments around the world but also many average computer users in the US. The upshot, according to this official: “Everybody’s a target; everybody with communication is a target.”

Could Peacetime Martial Law Be Near? (Yahoo News):


COMMENTARY | President Barack Obama signed an executive order Friday titled "National Defense Resources Preparedness." The news media is unsure of the precise meaning of the information included in the order and average citizens are left to figure out what it means in general. As a longtime supporter of the president, I've been reluctant to jump to conclusions, but the general tide of recent legislation and this order give me reason for concern about the intentions of this administration.

The order lists items such as the power of the executive departments of the U.S. federal government and its agencies to "identify requirements for the full spectrum of emergencies, including essential military and civilian demand." This same section, labeled "General Functions," also enumerates these departments and agencies might ensure availability of domestic resources and industries to secure national defense. Do these and other line items signal that America is on the verge of another war -- and will that war be with another nation or on U.S. citizens?

The first step in the direction of applying military law to private citizens occurred Dec. 31, when the president signed into law the National Defense Authorization Act of 2012. This legislation sounded the initial alarm to me because although its main purpose is for providing necessary funding of the military, it included provisions that allowed the indefinite detention without charge of private citizens.

The next signal of alarm came on March 8, when the president signed into law H.R. 347, the Federal Restricted Buildings and Grounds Improvement Act of 2011. The law restricts protests at political functions among other things. This is offensive since the U.S. was founded upon protest and revolution.

Perhaps each law taken individually wouldn't be a cause for concern, but the totality of these three suggests the federal government is envisioning more control over the civilian population than it has ever enjoyed. The president's order on Friday suggests to some the executive branch might be ready to enact martial law in peacetime.

The Pentagon Is Offering Free Military Hardware To Every Police Department In The US (Business Insider):


The U.S. military has some of the most advanced killing equipment in the world that allows it to invade almost wherever it likes at will.

We produce so much military equipment that inventories of military robots, M-16 assault rifles, helicopters, armored vehicles, and grenade launchers eventually start to pile up and it turns out a lot of these weapons are going straight to American police forces to be used against US citizens.

Benjamin Carlson at The Daily reports on a little known endeavor called the "1033 Program" that gave more than $500 million of military gear to U.S. police forces in 2011 alone.

1033 was passed by Congress in 1997 to help law-enforcement fight terrorism and drugs, but despite a 40-year low in violent crime, police are snapping up hardware like never before. While this year's staggering take topped the charts, next year's orders are up 400 percent over the same period.

This upswing coincides with an increasingly military-like style of law enforcement most recently seen in the Occupy Wall Street crackdowns.

Now U.S. Intelligence can keep tabs on innocent Americans even if they DON'T have terror links (Daily Mail):


Information about innocent Americans could be stored by the intelligence community for up to five years.

New Obama administration guidelines will allow the National Counterterrorism Centre to hang on to information about people that is stored in other government databases, even when they have no clear links to terrorism.

They replace guidelines issued in 2008 under which the NCTC was required to immediately destroy the data in such situations.

Obama Executive ‘Order’: US can seize any person, any resource, any time (Washington's Blog):


President Obama signed an Executive Order for “National Defense” yesterday that claims executive authority to seize all US resources and persons, including during peacetime, for self-declared “national defense.”

Petraeus: CIA Could Use Smart Household Appliances To Spy (Slate)


In early March, at a meeting for the CIA’s venture capital firm In-Q-Tel, CIA Director David Petraeus reportedly noted that “smart appliances” connected to the Internet could someday be used by the CIA to track individuals. If your grocery-list-generating refrigerator knows when you’re home, the CIA could, too, by using geo-location data from your wired appliances, according to SmartPlanet.

“The current ‘Internet of PCs’ will move, of course, toward an ‘Internet of Things’—of devices of all types—50 to 100 billion of which will be connected to the Internet by 2020,” Petraeus said in his speech. He continued:

Items of interest will be located, identified, monitored, and remotely controlled through technologies such as radio-frequency identification, sensor networks, tiny embedded servers, and energy harvesters—all connected to the next-generation Internet using abundant, low cost, and high-power computing—the latter now going to cloud computing, in many areas greater and greater supercomputing, and, ultimately, heading to quantum computing.

Samsung's new TV will watch the people watching it (BoingBoing):


"Smith!" screamed the shrewish voice from the Samsung 8000ES-series LED TV. "6079 Smith W.! Yes, you! Bend lower, please! You can do better than that. You're not trying. Lower, please! That's better, comrade. Now stand at ease, the whole squad, and watch me."

And lest you think this is only an American-based phenomenon:

Back-to-work schemes to face court hearing: Government will face accusations of forced labour at hearing in two cases at the Royal Courts of Justice in mid-May (Guardian)


Mr Justice Ouseley granted solicitors from the law firm Public Interest Lawyers a judicial review in the case of 22-year-old Cait Reilly, who says she was made to stack and clean shelves for three weeks in Poundland without pay or face losing all benefits under the government's sector-based work academy (SBWA) scheme.

Reilly's lawyers argue that being compelled to work represents a form of forced labour under the Human Rights Act.

Reilly, a geology graduate, says her situation was made worse by the fact she was already doing unpaid work experience in a museum, and the jobcentre made her cancel this to work in Poundland instead.


Under a pending proposal, the license-plate cameras at UK filling stations will soon begin to trigger automatic lookups of every motorist's insurance and tax records. Drivers whose insurance and tax records can't be located or verified will not be allowed to fill their tanks. This requires that the existing cameras, which are there to document drivers who don't pay for their gas, be connected to sensitive government databases filled with identifying personal information. Forensic cameras -- whose records are used after the fact to catch crooks -- don't need to be 100 percent accurate, since almost every plate they capture will not be involved in a crime, and ambiguous results can be resolved by a human backstop. But cameras that prevent you from getting something you need, like petrol, need to be 100 percent accurate, since it wouldn't do to let the person operating the cash-register override the judgment of the automated system.


Conservative Party co-treasurer Peter Cruddas offered access to the prime minister and chancellor for £250,000, the Sunday Times has alleged. It has footage of him apparently making the offer to undercover reporters.

Remember, an authoritarian police state is only possible under centrally planned economies. Just keep saying that to yourself and it will all go away. And just a reminder of some of the salient features of authoritarian capitalism:

Posted by escapefromwisconsin at 9:34 PM