Last year I asked this question: “does the use of computers mean it is time to reintroduce a degree of ornamentation in architecture?” In it, I asserted that there is something inherent in the human psyche that delights in ornamentation, going all the way back to the Stone Age, and that the sterility of modern buildings makes then inherently unlovable and understimulating.* I pointed out that the death of craftsmanship in favor of mass-produced materials installed by unskilled labor drove this trend, caused in turn by the increased costs of labor in advanced economies. I then pointed out that computer fabrication technologies have advanced sufficiently to once again create ornamental forms cost-effectively.

I said that the possibilities were there to create forms that were not mere slavish imitation of the past, but to create truly novel forms with our new computer tools that would make architecture lively and stimulating again. What did I mean? Well, I didn’t have many examples at the time. But now I do, courtesy of Treehugger:

Though it seems like it was carved by hand, the stair was actually created through digital tools and CNC fabrication, using engineered and hard wood material and a flat-pack approach:

These stairs for a residential project took us in an important new direction, harnessing digital production and fabrication to form a seamless and deeply sculptural experience.

The stair was entirely digitally fabricated using an intricate set of simply-cut but highly-detailed flat-pack elements, CNC-carving sheets of MDF and oak directly from our drawings, engraving depths to further split structural strands into ever-finer lineaments, producing elements that perfectly slot together like an architectural jigsaw. The pieces assemble into a highly-articulated, economic and sculptural 3-dimensional space that appears to be constantly changing as one travels through it.

Though it may seem paradoxical, we've discussed before how digital fabrication is set to democratize and diversify the design, manufacturing and distribution process in the coming years. Call it "mass customization": mix all that with talented designers and an artisanal approach, and we may be seeing more amazing works of architectural art such as this in the future.

This is exactly what I was taking about, and I'm glad I finally have an example to point to. It's a great use of the technology to create a beautiful sculptural element, and I'm excited about the possibilities for architecture of these new tools, and I think we need to begin exploring them and collaborating with other artists to discover the natural forms that can present themselves with new technology. Since I'm on the topic, here are some other thinking-out-loud thoughts concerning architecture's future:

1. I think the reskilling and DIY movements will lead to a rebirth of craftsmanship on some level. As the money economy gets closer it's logical Omega Point of "efficiency" removing ever more people from the labor force, more work will be done outside it, freeing people from the bottom-line mentality that's made architecture so sterile. Already you see people reviving arts like blacksmithing, ceramics, hand-tooled carpentry, glassmaking, plastering, etc., as a hobby or small business. As "formal" employment declines, more people might take up such skills, especially as they can be taught on an apprenticeship basis outside of the bloated, costly educational-industrial complex. As wages recede, these may become cost-effective again. Better tools will facilitate this also. I imagine a lot of these relationships will be bartered. See this:

2. Greater collaboration by architects with artists, craftsmen and builders will lead to more stimulating buildings. Most major twentieth-century art movements featured collaboration between architects and other visual artists and craftsmen (Viennese Secession, Bauhaus, etc.). Imagine rather than spray-painting crumbling industrial buildings, if graffiti artists made intentional murals to beautify such buildings? Imagine industrial artists creating bookshelves and furniture from discarded materials and installing it in a space. This may link up with semi-squatting and "informal" economies in depressed areas. The Internet facilitates this type of collaboration as well - innovative artists can be located on Etsy and other art and design -related blogs, and can collaborate much easier. See this:

3. More buildings will be vernacular, as has been the historical norm. That is, it will not feature "professional" services, and be made outside of the contractor-controlled building sector, with its elaborate financing requirements and risk mitigation. A lot of this will be done out of necessity as unmet needs for shelter go unfulfilled due to economic decay. With so many architects and other building professionals sidelined by the failing economy and with no creative outlets, there will be no shortage of talent (just of money). There are a lot of empty buildings in the Midwest and Northeast just ready to be used for such experimentation (factories, houses, barns, etc.). Falling costs of such buildings may also work to economic advantage here. Already, much of America's rusting industrial detritus is being creatively recycled and repurposed (e.g. shipping containers). What new artistic forms will this create (Steampunk?). See this:

4. The artificial division between "designer" and "craftsman" will break down. More architects will become builders, and builders will become designers. Many will have to work outside the system. See this:

6. Paradoxically, this may take place at the same time the "conventional" building industry moves towards more prefabrication, standardization and automation, leading to a bifurcation in construction. Industrial buildings will continue to get more "efficient" and stripped-down while other buildings get made-by-hand.

7. Integration of nature and architecture will continue. Too often new "high tech" ways are proposed for this, but these are not necessary. You can create a green wall by just planting ivy. You can create a green roof with container gardening. Sunny rooms and rooms with skylights can be turned into greenhouses or solariums. Neighboring empty lots and missing teeth can be converted into pocket parks and gardens by guerrilla gardeners. Backyards can house chicken coops. Hydroponics can grow food in basements and garages. Windows and balconies can get planter boxes.

8. Energy saving will become more important. Again this need not be high-tech; insulation is cheap. Solar shading can be accomplished with shutters. "Warm window" solutions can stop heat leakage. Expensive solutions will be out, cheap ones in. "green" will no longer be expensive technology and materials for the 1%.

9. Buildings will become more autonomous as urban and rural infrastructure declines due to lack of tax revenue. Many of these can be done on the cheap with a small set of skills. Roof-mounted panels can provide electricity and hot water, cisterns can store rainwater, with slow sand filters and living machines purifying it; human waste can be composted or sent to leaching fields; cooking methane can be harvested from decaying scraps and refuse; coppiced wood can be burned in a masonry heater. What sort of artistic expression will this lead to? See this:

and the masonry heater itself may become a thing of beauty: 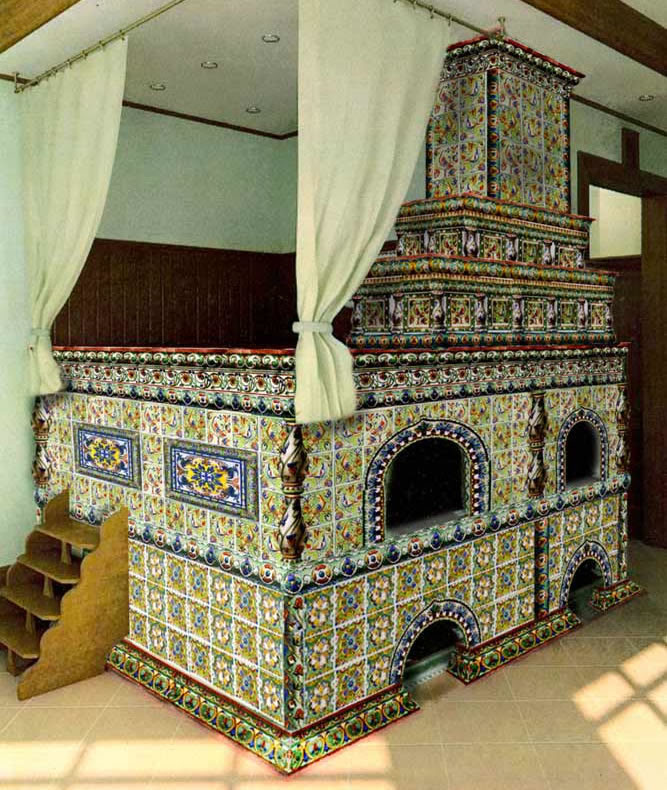 10. First principles may start to get rethought. Cultural inertia tends to dictate practices long after they've outlived their usefulness, even if better ideas come along (the QWERTY keyboard layout is proof positive of this). Maybe we'll spend more time eating outside. Maybe we will use transformer furniture. Maybe we will discard built-in cabinets. Maybe we will rethink bathrooms. Maybe we'll use alternating tread stairs. There's a lot of potential here.

11. People will become more active in the way their neighborhoods are designed. Grass-roots organizations will take a more active role in the built environment. See this:

So there are just a few ideas about where building is heading - much more local, vernacular and less energy-intensive. Shelter is a basic human need; it won't be going away. There will be much less of it though, with "doubling up" on the rise and "household formation" on the decline. This is what happens as societies get poorer (and is the norm in much of the world). This will cause cultural norms of the nuclear family to change. It should be noted that among Hispanic populations who are increasingly populating U.S. cities, such arrangements are already culturally acceptable, facilitating this change.

* One reason why architects have turned to elaborate shapes to make them interesting again. Unfortunately such elaborate forms are wasteful and inadaptable.

The American Institute of Architects reported that last month’s billings index, a gauge of nonresidential construction, reached its lowest level since it began collecting data in 1995.

The pain of layoffs notwithstanding, the design world could stand to come down a notch or two — and might actually find a new sense of relevance in the process. That was the case during the Great Depression, when an early wave of modernism flourished in the United States, partly because it efficiently addressed the middle-class need for a pared-down life without servants and other Victorian trappings.

“American designers took the Depression as a call to arms,” said Kristina Wilson, author of “Livable Modernism: Interior Decorating and Design During the Great Depression” and an assistant professor of art history at Clark University. “It was a chance to make good on the Modernist promise to make affordable, intelligent design for a broad audience.”

The most popular American designer of that era was probably Russel Wright, who acted as the Depression’s Martha Stewart, turning out a warmed-up, affordable version of European modern furniture, tableware and linens for a new kind of informal home life. A bentwood armchair cost $19.95. “They were not just cheap, they were beautiful, and that was a powerful combination,” Ms. Wilson said.

Design tends to thrive in hard times. In the scarcity of the 1940s, Charles and Ray Eames produced furniture and other products of enduring appeal from cheap materials like plastic, resin and plywood, and Italian design flowered in the aftermath of World War II.

Will today’s designers rise to the occasion? “What designers do really well is work within constraints, work with what they have,” said Paola Antonelli, senior curator of architecture and design at the Museum of Modern Art. “This might be the time when designers can really do their job, and do it in a humanistic spirit.”

In the lean years ahead, “there will be less design, but much better design,” Ms. Antonelli predicted.
Posted by escapefromwisconsin at 12:50 PM