Anybody Want To Buy A Used College - er, Car? 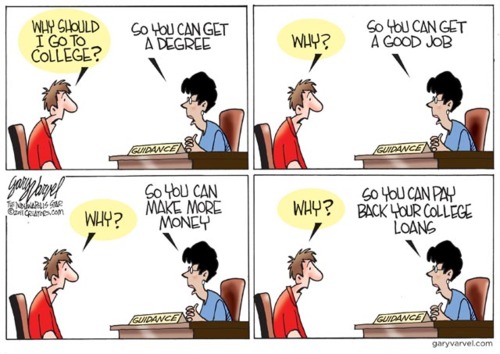 
One fast-growing American industry has become a conspicuous beneficiary of the recession: for-profit colleges and trade schools.

At institutions that train students for careers in areas like health care, computers and food service, enrollments are soaring as people anxious about weak job prospects borrow aggressively to pay tuition that can exceed $30,000 a year.

But the profits have come at substantial taxpayer expense while often delivering dubious benefits to students, according to academics and advocates for greater oversight of financial aid. Critics say many schools exaggerate the value of their degree programs, selling young people on dreams of middle-class wages while setting them up for default on untenable debts, low-wage work and a struggle to avoid poverty. And the schools are harvesting growing federal student aid dollars, including Pell grants awarded to low-income students.

“If these programs keep growing, you’re going to wind up with more and more students who are graduating and can’t find meaningful employment,” said Rafael I. Pardo, a professor at Seattle University School of Law and an expert on educational finance. “They can’t generate income needed to pay back their loans, and they’re going to end up in financial distress.”

For-profit trade schools have long drawn accusations that they overpromise and underdeliver, but the woeful economy has added to the industry’s opportunities along with the risks to students, according to education experts. They say these schools have exploited the recession as a lucrative recruiting device while tapping a larger pool of federal student aid.

“They tell people, ‘If you don’t have a college degree, you won’t be able to get a job,’ ” said Amanda Wallace, who worked in the financial aid and admissions offices at the Knoxville, Tenn., branch of ITT Technical Institute, a chain of schools that charge roughly $40,000 for two-year associate degrees in computers and electronics. “They tell them, ‘You’ll be making beaucoup dollars afterward, and you’ll get all your financial aid covered.’ ”

Ms. Wallace left her job at ITT in 2008 after five years because she was uncomfortable with what she considered deceptive recruiting, which she said masked the likelihood that graduates would earn too little to repay their loans.

As a financial aid officer, Ms. Wallace was supposed to counsel students. But candid talk about job prospects and debt obligations risked the wrath of management, she said.

“If you said anything that went against what the recruiter said, they would threaten to fire you,” Ms. Wallace said. “The representatives would have already conned them into doing it, and you had to just keep your mouth shut.”

A spokeswoman for the school’s owner, ITT Educational Services, Lauren Littlefield, said the company had no comment.


WASHINGTON — Last year, the Obama administration vowed to stop for-profit colleges from luring students with false promises. In an opening volley that shook the $30 billion industry, officials proposed new restrictions to cut off the huge flow of federal aid to unfit programs.

But after a ferocious response that administration officials called one of the most intense they had seen, the Education Department produced a much-weakened final plan that almost certainly will have far less impact as it goes into effect next year.

The story of how the for-profit colleges survived the threat of a major federal crackdown offers a case study in Washington power brokering. Rattled by the administration’s tough talk, the colleges spent more than $16 million on an all-star list of prominent figures, particularly Democrats with close ties to the White House, to plot strategy, mend their battered image and plead their case.

College educations are now hyped with honesty and ethics that would make car dealers blush. College is an even easier scam, since the startup costs are low, and in the end you don't have any actual real-world object or guarantee to deal with - just a piece of paper and a pat on the back. And what's most reprehensible is that these hustlers are selling hope of a better life to desperate Americans, when all they really want is to take their money. They're selling hope and preying on people's optimism. What could be more craven?

Face it, every institution in America is just a way to rip you off.
Posted by escapefromwisconsin at 7:59 PM