When I said most of our work is useless paper pushing in some recent blog posts, I did not have hard figures. Now, thanks to the Economix blog, I do:

The occupation employing the greatest share of American workers is paper pushers, according to the Bureau of Labor Statistics.

Well, technically the bureau reports that a plurality of workers — 16.9 percent — are employed as “office and administrative support,” but you get the idea. Here’s a chart from a new report on occupational employment: 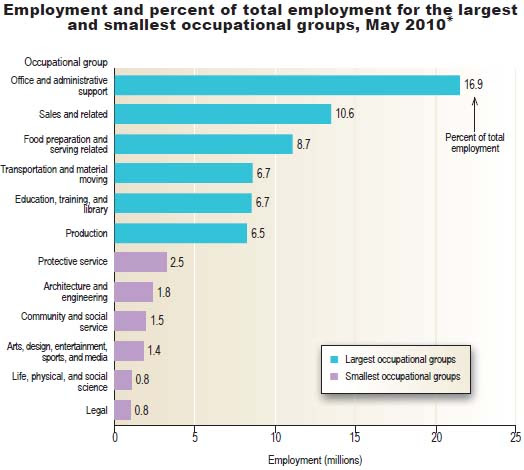 The Labor Department predicts that many of the jobs in this group — for example, mail clerks and proofreaders — will be replaced by automation in the next few years. Occupations in customer service, however, are expected to add about 399,500 by 2018 “as businesses put an increased emphasis on building customer relationships,” according to the bureau’s Occupational Outlook Handbook.

And if you believe that last part, good for you. Here's a sucker.So who here thinks we're going to create enough paper pushing jobs for everyone to solve our unemployment crisis? I've noticed that a lot of our jobs are doing nothing more than negotiating the complexity of society. As society becomes less complex, a lot of these jobs will no longer be necessary. I don't think we're all going to be self-employed writing apps for each other.

Here is one idea: Sheep Lawn Mowers, and Other Go-Getters (via NYT):

IN this verdant lawn-filled college town, most people keep their lawn mowers tuned up by oiling the motor and sharpening the blades. Eddie Miller keeps his in shape with salt licks and shearing scissors.

Mr. Miller, 23, is the founder of Heritage Lawn Mowing, a company that rents out sheep — yes, sheep — as a landscaping aid. For a small fee, Mr. Miller, whose official job title is “shepherd,” brings his ovine squad to the yards of area homeowners, where the sheep spend anywhere from three hours to several days grazing on grass, weeds and dandelions.

The results, he said, are a win-win: the sheep eat free, saving him hundreds of dollars a month in food costs, and his clients get a freshly cut lawn, with none of the carbon emissions of a conventional gas-powered mower. (There are, of course, other emissions, which Mr. Miller said make for “all-natural fertilizer.”)

Other yeoman start-ups are charting a more traditional path to profits.

Carrie Ferrence, 33, and Jacqueline Gjurgevich, 32, were in business school at Bainbridge Graduate Institute in Washington State when they noticed that many local neighborhoods were “food deserts,” without easy access to fresh local produce and other grocery staples.

Their answer was StockBox Grocers, a company that repurposes old shipping containers as small grocery stores. The company won $12,500 in a local business plan competition and raised more than $20,000 online in a Kickstarter campaign to finance its first store, which opened in the Delridge neighborhood of Seattle in September.

“It’s a tough job market, and you have really few instances in your life to do something that you really love,” Ms. Ferrence said. “It’s not that this is the alternative. It’s the new plan A.”

Worldwide Opportunities on Organic Farms, a nonprofit that matches willing farmhands with organic farms seeking temporary help, has become, for the 4-H crowd, what Stanford’s computer science department has been for Silicon Valley. In the last three years, membership in the group’s United States branch has quadrupled, and among a certain set of college-age agriculturalists, the organization has become a verb (as in “Did you WWOOF last summer?”).

OF course, the mainstreaming of farm life has inspired a certain amount of skepticism among those with more agricultural experience.

Jason Stroud, 44, of Red Hook, Brooklyn, has been raising chickens since he was 19. He said he thinks many newcomers to the sustainable agriculture world are making a high-tech mountain out of a Bronze Age molehill.

“It’s simpler than one would think,” he said of modern-day homesteading. “Peasants with zero education were doing this hundreds of years ago.”

After his regular work, restoring high-end antiques, dried up earlier this year, Mr. Stroud began advertising his farm skills to fad-chasing urbanites: for a price, he would build them backyard chicken coops and teach them to care for the birds.

The offer was so well received that Mr. Stroud estimates that nearly half of his income now comes from chicken consulting. He dispenses advice on a Web site called Red Hook Chicken Guy, where he lists the benefits of chicken farming in Brooklyn. (Reason No. 10: “It’s just a cool thing to do.”)