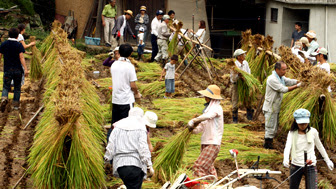 A while ago, I wrote an essay entitled "Is Japan the Future?" This was based on some articles I had read pointing out that Japan seems to have entered the era of zero economic growth two decades ago. It also talked about the Japan's Edo Period as a model for a self-sufficient economy.

There are two fascinating articles on the BBC today about the sociological changes Japan is undergoing. Interestingly, they seem to parallel the U.S. in many ways. Traditional marriage and child-rearing in Japan is disappearing:


Record numbers of young Japanese do not have boyfriends or girlfriends, and many do not want one, according to a survey by the country's government. Sixty-one percent of unmarried men aged 18 and 34 do not have a partner, nor do half of unmarried women the same age. The numbers have increased since the previous survey in 2005.

Japan has one of the lowest birth rates in the world - and its population is on course to shrink dramatically by the middle of the century. So every five years the government carries out a detailed survey of attitudes to sex and marriage. The latest found that 61% of unmarried men aged 18 to 34 have no girlfriend, and half of women the same age have no boyfriend - a record high. More than a quarter of the men and 23% of the women said they were not even looking.

Some cited a shortage of money, others a belief that it is impossible to find a good partner once they had passed the age of 25. Many of the women also said single life suited them better than how they imagined marriage would be. The survey also found that more than quarter of unmarried men and women between 35 and 39 years old said they had never had sex.

Intersesting how this coincides with the substance of Kate Bolick's article that become such a sensation in the Atlantic Monthly. It seems to be a worldwide trend.

And as in the United States and Greece, the Japanese are finding a life slaving away in a cublicle in overcrowded cites less and less appealing, and longing to return back to the land:

Like millions of others from her generation Megumi Sakaguchi cannot find a permanent job, just contracts. Temporary workers now make up a third of the workforce - up from fewer than a fifth in the mid-1980s - and a greater proportion of them are young. The certainty of the job-for-life tradition enjoyed by earlier generations has passed her by.

"I never know if I'm going to lose my job," she says. "Financially my anxiety levels are very high. "In the morning during the rush hour when I'm getting off the train, the way people behave, they are almost inhuman," she adds. So she has decided it is time for a change.

One weekend in October Megumi Sakaguchi joined a bus tour through the Japanese countryside. Like her fellow passengers, who were also from the cities, she was getting a taste of what life would be like as a farmer - trying out working the land for a day.

Excursions like this around apple orchards and greenhouses full of strawberry plants, talking to farmers in their fields, take place pretty much every week somewhere in rural Japan. They are organised and paid for by local authorities which are desperate to repopulate the countryside. After years of young people heading for the cities the average farmer in Japan is now 65.8 years old and that figure is rising steadily.

But now some are considering making the journey back.

From Clogs to clogs in three generations, indeed. Perhaps I belong in Japan.
Posted by escapefromwisconsin at 12:25 PM