Imagine a land the size of Western Europe with abundant natural and mineral resources, including forests, oil and rare elements that the world's cell phones and computers rely on for manufacture. Now imagine this place with no functional government whatsoever. A paradise? Hardly.

It's a real place - the Democratic Republic of Congo (DR Congo), formerly Zaire. While Somalia is often pointed to as a cautionary tale of how libertarianism operates under actual conditions, DR Congo seems to make an even better cautionary tale. It is considered to be one of the world premier failed states, if not the premiere one.

This article from the BBC is fascinating throughout: Failed State: Can the DR Congo recover? What really shocked me was the size of this region - the BBC has a graphic superimposing DR Congo on Western Europe, and they're almost the same size!


People in the Democratic Republic of Congo expect very little from the state, government or civil servants.

In fact, ordinary Congolese often repeat expressions like "the state is dying but not yet dead" or "the state is ever present but completely useless".

It seems they also expect little from the upcoming elections and there can be little argument that DR Congo is indeed a failed state.

The government is unable to provide decent education or health services.

The country - two-thirds of the size of western Europe - is a battleground.

I could insert a comment here about how similar the first three points are to another country with which we're familiar [ahem], but I'll refrain. I'll just point here and wonder how much we can expect from our own government. Anyway, it seems a total lack of government does not lead to the expected libertarian paradise:


I asked a university colleague if he thought things could get worse.

"When you are rock bottom, you can still dig deeper," was his response.

Public administration is in shambles. Civil servants have mutated into predators.

Ferdinand Munguna is a retired railway worker in Lubumbashi, the mineral capital of DR Congo in the south of the country.

He has to bribe the man working in the pension office who requires "motivation" before processing the old man's file. Mr Munguna complains that his pension is "hardly enough to buy soap".

Starting a business in DR Congo takes 65 days compared to the sub-Saharan African average of 40 days. In neighbouring Rwanda it takes three days.

And guess which country has one of the worst air safety records worldwide?

The recently released UNDP report on human development indicators put the former Belgian colony at the bottom of the 187 countries it surveyed.

Obviously this an extreme example, but it seems to be indicative of the way things are going around the world in the age of austerity. This is what we have to look forward to, while the wealthy will be insulated in the cocoons of extravagance we talked about yesterday. I've heard several interviews with Lester Brown, and he believes that environmental and resource problems are causing states to fail one by one around the world. Every passing year brings more failed states. Brown asks the pointed question: how many failed states to we need to have before we have a failing global system? He writes:


The Failed States Index, undertaken by the Fund for Peace and published in each July/August issue of Foreign Policy, ranks 177 countries according to “their vulnerability to violent internal conflict and societal deterioration,” based on 12 social, economic, and political indicators. In 2005, just 7 countries had scores of 100 or more out of 120. (A score of 120 would mean that a society is failing totally by every measure.) By 2010, it was 15. Higher scores for countries at the top and the doubling of countries with scores of 100 or higher suggest that state failure is both spreading and deepening.

States fail when national governments lose control of part or all of their territory and can no longer ensure people’s security. Failing states often degenerate into civil war as opposing groups vie for power. In Afghanistan, for example, the local warlords or the Taliban, not the central government, control the country outside of Kabul.

Among the top 20 countries on the 2010 Failed States list, all but a few are losing the race between food production and population growth. The populations in 15 of the top 20 failing states are growing between 2 and 4 percent a year. Many governments are suffering from demographic fatigue, unable to cope with the steady shrinkage in cropland and freshwater supply per person or to build schools fast enough for the swelling ranks of children.

In 14 of the top 20 failing states, at least 40 percent of the population is under 15, a demographic indicator that raises the likelihood of future political instability. Many are caught in the demographic trap: they have developed enough economically and socially to reduce mortality but not enough to lower fertility. As a result, large families beget poverty and poverty begets large families.

Virtually all of the top 20 countries are depleting their natural assets—forests, grasslands, soils, and aquifers—to sustain their rapidly growing populations. The 3 countries at the top of the list—Somalia, Chad, and Sudan—are losing their topsoil to wind erosion, undermining the land’s productivity. Several countries in the top 20 are water-stressed and are overpumping their aquifers.

After a point, as rapid population growth, deteriorating environmental support systems, and poverty reinforce each other, the resulting instability makes it difficult to attract investment from abroad. Even public assistance programs from donor countries are sometimes phased out as the security breakdown threatens the lives of aid workers.

Here's Wikipedia on failed states. What's amazing is that according to their map, almost all of the world's surface area is either failed of in danger of failing (I would include the U.S. in orange). And notice how much worse it has gotten in the last five years! It seems Lester Brown's worries are justified - the world system is failing. See also John Robb on Failed States versus Hollow States.

Do read the BBC article. It ends on a positive note - even in the worst of  failed states, people find the courage to go on:


While DR Congo is clearly a failed state, Congolese society has not failed.

On the contrary it is strong, vibrant, dynamic, tolerant and generous. People have a sense of taking charge of their own destinies.

Women form rotating credit systems to compensate for the absence of an accessible banking system.

Farmers band together to hire a lorry to get their cassava or charcoal from the central city of Kikwit to market in Kinshasa.

Bebe, who lives in the Paris suburb of Griney, sends money home to Kasai via Western Union. Some months it contributes to school fees, others it pays for medicines for her ailing mother-in-law.

Her father will spend some of it on Primus, the beer of choice in Kinshasa.

"Elikia" means hope in Lingala and there is much of it throughout the country.

Hopes for positive change will come from the people, not from the Congolese political establishment, and certainly not from outside interventions.

Incidentally, basically the whole African continent is failed or failing. To give you some idea of how much land that is, see this: The True Size of Africa. 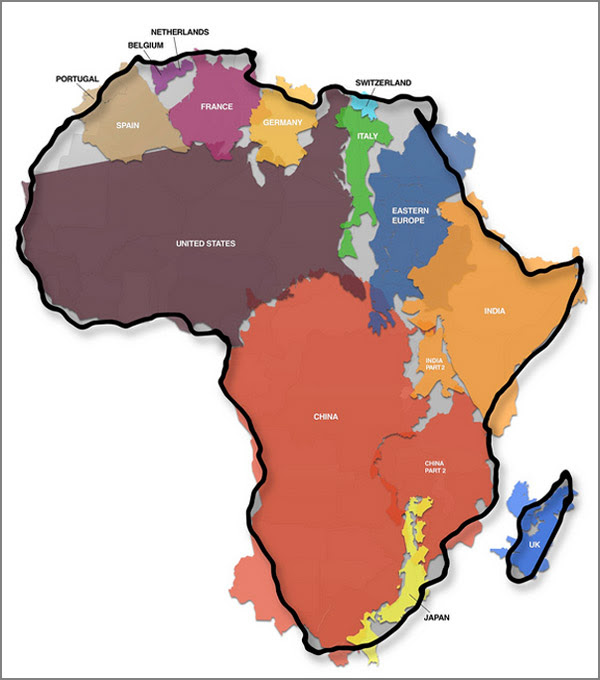 Posted by escapefromwisconsin at 6:44 PM